A New Catalogue of the Very Old from Samuel Gedge Ltd. 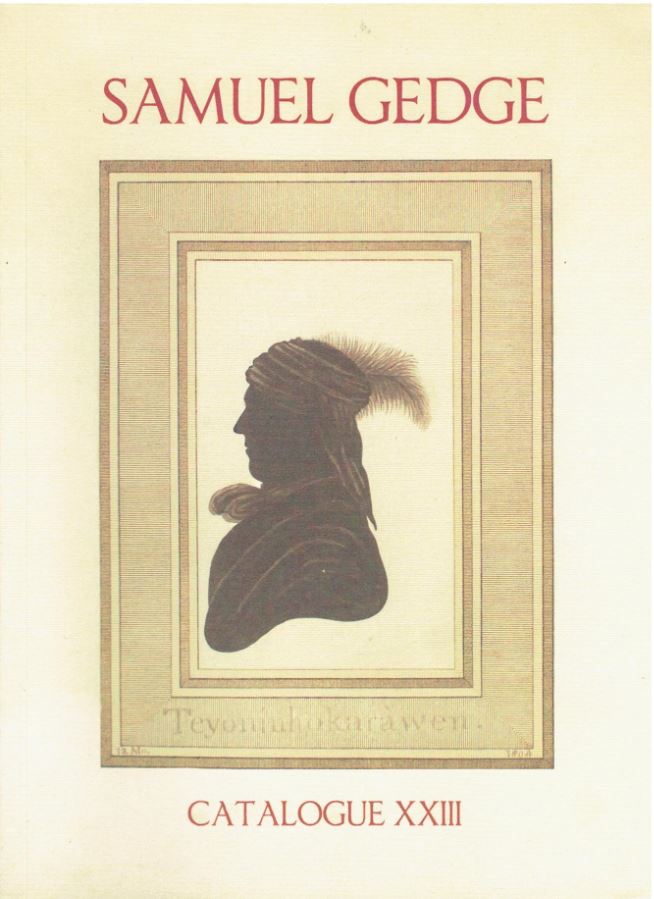 Samuel Gedge Ltd. has issued their Catalogue XXIII. The use of Roman numerals is appropriate as the material in here is old. Most items fall in the 18th to early 19th century, with a few on either side. There are books and numerous types of ephemera, from printed broadsides and sheets to manuscript letters, notebooks, account books and the like. A few even move beyond paper, such as an abolitionist medal and a dental mirror from 1804. The sights that mirror must have seen were frightening, considering the state of tooth care in those days. Here are few of those less scary items found in this latest Gedge catalogue.

We begin with the oldest book in the catalogue, one which tells an even older story, albeit one likely made up. Item 9 is the Itinerarius Joannis de Hese presbyteri a Hierusalem... published in 1504. It is an account of the travels of Johannes Witte de Hese, a Dutch priest who supposedly made a journey to the Holy Land and Asia around 1389. This is an early printed account of what had been a passed around manuscript story, first reaching print about 1490. Hese is something of a Dutch John Mandeville, an early traveler who most likely never existed. If he did, certainly his tale is a tall one. He supposedly went on a pilgrimage to Jerusalem, but then continued traveling, to Egypt, India, and Ethiopia. He even visited Prester John's empire and saw its magnificent castle, which makes the story quite dubious. This wished for Christian leader from some far off land, who would help the Crusaders recapture the Holy Land, was never found. Hese also talks of visits to places with unicorns, pygmies, and a whale as big as an island (or as big as this tale). This is a short book, but provides a lot of information, or imagination. Priced at £9,500 (British pounds, or approximately $12,083 U.S. dollars).

Hanworth Hall is one of those magnificent English country estates, this one located in Norfolk. It goes back to the 16th century, and for three centuries it was home to the Doughty family. Naturally, they had a staff to manage the place, but Anne Doughty, wife of Robert Doughty, kept a record of purchases for the kitchen. This record covers about twenty years, from 1767-1787. Robert inherited the estate when his father died in 1770. Among the delicacies Anne ordered were lobsters, flounders, oysters, tripe, shrimp, turnips, black pepper, a cod, an eel, and anchovies. She must have made some terrific pizzas. But that was not all. There were 3 pigeons, a couple of wild ducks, a goose, sweet breads, six young geese, a lamb's head, and calves feet. They ate well, even if I would not have wanted to be invited for dinner. Item 74. £2,250 (US $2,867).

The next item is a letter from a leader who lived 300 years ago, yet still holds a place in the Guinness Book of World Records. Sultan Moulay Ismail ibn Sharif inherited the Moroccan throne in 1672 and ruled for the next 55 years. He was known as the "Warrior King," a well-deserved epithet. He battled the Ottomans and the Spanish, achieving independence for his country. He also waged a long-running battle with his nephew for power, which he eventually won. While effective, Moulay Ismael was also brutal and unmerciful. He used tens of thousands of slaves, often Europeans captured by pirates, to build his cities. He is said to have slaughtered tens of thousands, such as slaves who he didn't think worked hard enough. Despite this, he could also be quite diplomatic. He had a long lasting friendship with France and its King Louis XIV, who ruled even longer and mostly overlapped Sultan Ismail's reign. He also achieved peace with England, which is the concern of this letter. Here he writes English Ambassador Charles Stewart in December 1720. It is a friendly note about how the Sultan hopes an agreement will be reached, that he will not oppose it, and cites friendly relations between the countries going back over a century to the time of Queen Elizabeth. As for his place in the Guinness Book of Records, Moulay Ismail is noted for fathering more children than anyone else on record. The French Ambassador claimed he had well over 1,000, but Guinness credits him with a more modest 888. He had four wives, but supposedly 500 concubines. When he died, there was a battle for succession among his sons. No wonder! Item 12. £9,500 ($12,083).

One sin that never goes out of style is gambling. A favorite version of this sin is the wheel game, a version of the vice going back over two centuries. It is best known today in the form of the roulette wheel. It was first played around the turn of the 19th century, but there were precursors, such as EO. "E" stands for even, "O" for odd. Those signify even and odd numbers on which the gamblers could bet. Item 59 is a Georgian print, circa 1780, of a London club room where guests participated in this game of chance. Seven men sit or stand around the EO table while an eighth off to the side sips a glass of wine. A rhyme beneath the image suggests the folly of the game. It notes that men of every station go to the EO tables, "with plans and schemes so deep they're sure to win / But alas their plans and schemes prove all a whim." £1,250 (US $1,592).

There is a bit more satire in this biting broadside. The large caption beneath the illustration reads, Dabbling in the Funds, or the City Gold Finders. It satirizes investments in "bubbles" that were raging at the time (circa 1825). The image shows a group of well-dressed men falling off a cliff into a large body of water as they reach out to a not-quite reachable devilish figure. In its hand, the demon holds papers headed "Bog & Bubble Cos." The verse describes such bubbles, noting that of all the mining bubbles, gold mines are preferred. Item 21. £450 (US $573).