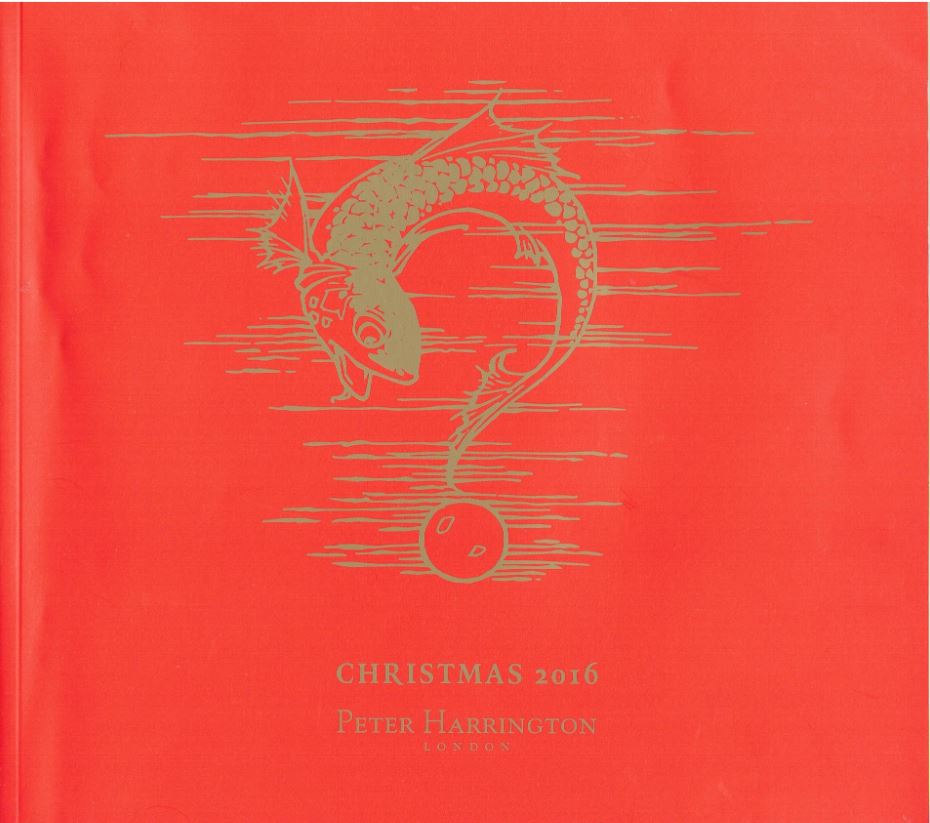 We are slightly late on this, but not by much. Peter Harrington recently produced a catalogue for Christmas 2016. The material isn't particularly Christmasy, so it's fine for January 2017 too. In fact, it isn't particularly anything, other than excellent copies of solid books. The topics and types vary widely, so anything may show up. Here are a few selections.

Here is a book which has nothing to do with Christmas, by a writer who is associated with nothing else. Well, that is assuming his name is familiar at all. Rudolph the Red-Nosed Reindeer is one of the biggest selling songs ever recorded. The song was written by Johnny Marks and recorded by singing cowboy Gene Autrey for Christmas 1949. However, Rudolph was already ten years old at the time, which is something like 50 in reindeer years. Rudy first came to life as a giveaway book at Montgomery Ward in 1939. Robert L. May, an advertising copy writer at Ward's, was asked by his boss to create a story to be used as a promotion for the coming Christmas. It was very popular, though the book has largely been forgotten (as has Ward's) while Rudolph lives on, thanks to Marks' version as a song. By the way, Marks was May's brother-in-law. None of this has much to do with item 274 other than to tell you who Robert L. May was. The following year, May created another book, this one titled Benny the Bunny Liked Beans. Unfortunately, May's brother-in-law never put this one to music, so the story is an obscurity. But, you can still get a copy from Harrington. Priced at £675 (British pounds or approximately $844 U. S. dollars).

Sometimes an author becomes so associated with one character, or set of characters, that we forget that he had a successful writing career that involved anything else. A. A. Milne's name immediately brings up images of Winnie-the-Pooh and his friends, but to most people, probably little if anything else. However, before (and after) his Pooh days, Milne wrote plays, poems, and occasional novels. One of those novels was a mystery/detective novel, published in 1922, a few years before Pooh Bear made his debut. The real Christopher Robin, Milne's son Christopher Robin Milne, was still only two years old in 1922, so he probably hadn't developed his full collection of inspirational stuffed animals yet. The mystery novel is entitled The Red House Mystery, and it is one of those where a group of people are gathered in a house and one is found dead. One of the others in the party becomes an amateur detective, eventually solving the mystery. Item 136. £6,500 (US $8,178).

This next book is not a piece of great literature, but like many great books, it was controversial in its time. Item 5 is Hollywood Babylone, by Kenneth Anger, published in 1959. Evidently, "Babylone" is how the French spell "Babylon," since this book, despite its Hollywood topic, is in French. It would later be published in English, but the French edition is the first. Indeed, it was first published in English in 1965 and quickly banned. It would not be until 1975 that Americans could read the book (unless they understood French) as that's when the second English edition was published, and allowed to be sold. This is a tell-all, scandal book, revealing the terrible secrets of Hollywood stars from 1900 through the 1950's. At the time the second English edition was published, the New York Times reviewer said of it, "If a book such as this can be said to have charm, it lies in the fact that here is a book without one single redeeming merit." In other words, it is the kind of book we like to read. Besides which, this edition is in French, and anything written in French is classier than something in English. £875 (US $1,100).

To balance the non-children's book written by a notable children's book author, we have some actual children's books by such an author. And these books, like the one above, have the added classiness of being in French. Item 21 is a set of first editions of the first four Babar books. Babar is the French-speaking elephant, who came to prefer green clothes, but went around pretty much naked when young. He went off to visit the big city after the unfortunate passing of his mother. When he returned to elephant land, he brought back a knowledge of human civilization and values (along with the French language) to share with his fellow pachyderms. They made him king because humans are so much more civilized than elephants (never mind that a human shot and killed his mother). The four books are Histoire de Babar (1931), Le Voyage de Babar (1932), Le Roi Babar (1933), and Les Vacances de Zephir (1936). The author was Jean de Brunhoff, who died the year after Zephir was published at the age of 37. There were two more of his Babar books published posthumously, but after a hiatus of several years, his son, Laurent, picked up the series, with the vast majority of Babar titles written by the son. Laurent is 91 years old today, lives in New York, and may still add more books to the series. We hope so. £3,750 (US $4,717).

The German bombing of London during the Second World War, begun in September 1940, was meant to be a prelude to a land invasion. That invasion never happened, the bombing not softening up Britain as the Germans anticipated. However, at the time this handbill was printed in 1941, such a land invasion was still a distinct threat. It was at this time that the Ministry of Information published this sheet, with Winston Churchill's inspirational advice and practical guidance, headed Beating the INVADER. A message from the Prime Minister. Churchill explains that if and when the attack begins, it will be too late to go. Therefore, it will be everyone's duty to "STAND FIRM!" In those places where no fighting is occurring, nor rifle fire can be heard, everyone needs to follow "the second great order and duty, namely 'CARRY ON'." Keep calm and carry on, in a bit more detail. Item 215. £850 (US $1,069).