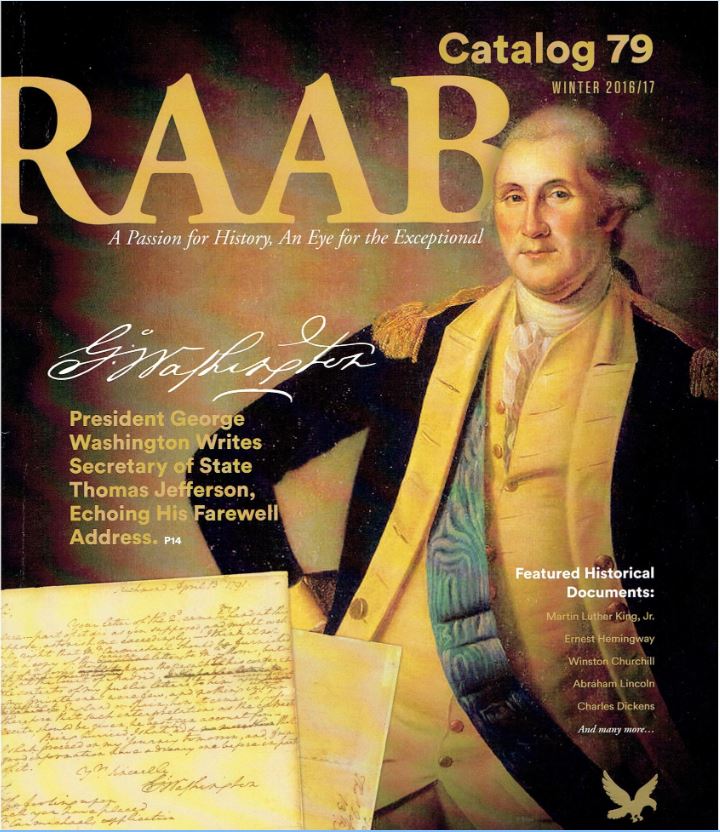 The Raab Collection has issued their Catalog 79 Winter 2016/17. Raab specializes in historical documents, signed, and of the first order of importance. They are signed by people you recognize, concerning events of great significance. Out of 35 items, there was only one name I did not recognize (Jonathan Russell, one of the U. S. negotiators for the treaty which ended the War of 1812), and one that took a second before the ah-ha moment (James Smithson, founder of the Smithsonian). There are numerous U. S. Presidents, from Washington to Nixon (with greats like Lincoln, Jefferson, two Roosevelts and others in between), a few generals (Grant, Lee, Sherman, and Custer), a couple of major writers (Dickens and Hemingway), leaders of other lands (Napoleon, Gandhi, Churchill, Queen Victoria, George III (the last King of America, so to speak), a couple of Louises (XIV, XVI). Does Jefferson Davis count as a foreign leader to America? Depends on whether you believe he ever headed a nation. Then there's a famous judge (Marshall), civil rights leader (King), and compromiser (Clay). And, there's an American patriot who is still best known for his signature (Hancock). Here are a few of these important historical documents.

We begin with a document signed by the man whose name has become synonymous with the autograph, an American patriot who signed this paper in 1776. That would, of course, be John Hancock, but no, the item is not the original Declaration of Independence. It was his bold signature on that document which made "John Hancock" another term for signature. However, this is still a very interesting paper in its own right. In 1776, Hancock was President of the Continental Congress. The Americans and British were jockeying for position with the various Indian tribes of the West (which was not very far west by today's standards). The Americans hoped to gain their support, or at least their neutrality. In October, various chiefs from western Pennsylvania and Ohio met with the Commissioner to the Indians at Fort Pitt (today's Pittsburgh), and then headed east to meet Congress in Philadelphia. They were treated with friendship and respect, something that would sadly be lacking from future generations of Americans. When it was time to go home, Hancock filled out this pass, allowing ten named "Indian Sachems & warriors...to return to Pittsburgh with the Commissioners for Indian Affairs in the Middle Department, without hindrance or molestation, and all Committees and other persons of the said States are hereby required to be aiding and assisting of them during this said journey to Pittsburgh." Hancock describes the ten as being "in friendship with the people of the United States of America." The pass is dated December 9, 1776. Item 15. Priced at $38,000.

Lots of people have pen pals from far away, but few quite like 15-year-old Fred Campbell of Kansas City back in the 1920's. Campbell wrote Mohandus Gandhi a letter in 1925 asking why he hated the British. Gandhi had recently been released from two years in prison for irritating the British too much. Surprisingly, Gandhi replied to the American teenager. In his famous reply, Gandhi explained that he did not hate the British, but there are times, even with those you love, where you cannot shut your eyes to their faults. Campbell followed up with a letter requesting that Gandhi find him a 16-year-old Indian pen pal who spoke English. Item 3 is Gandhi's response to that follow-up letter, dated April 23, 1926. In it, he says he would have to go hawking Campbell's letter from place to place to find an Indian who spoke English, "which I am sure you would not want or expect me to do." Even more surprisingly, Gandhi makes another offer – "But if you want to open correspondence with a grown-up person who can write with the freshness of youth, I might succeed." I can trace at least one more letter after this from Gandhi to Campbell, but as to how long the correspondence continued, or whatever became of Fred Campbell, I have not been able to determine. $14,000.

In late 1937, an old friend and Navy Commander, George Sweet, wrote President Franklin Roosevelt concerning criticism directed at the President. Roosevelt wrote back, saying that he did not believe domestic issues were as bad as many claimed. However, he was very worried about the international situation. FDR writes, "I am really worried about world affairs. The dictator nations find their bluffs are not being called and that encourages other nations to play the same game." Italy had taken over Ethiopia and Germany had already broken the Treaty of Versailles by militarizing the Rhineland, all while the world stood by. The next year would bring the height of Britain's policy of appeasement under Neville Chamberlain. Roosevelt wanted to see America and the West respond decisively to the rising aggressive dictatorships, but ultimately American isolationism would allow him to do no more than aid Britain with arms and even that required great efforts by the President. It was not until Pearl Harbor that America finally came to recognize what Roosevelt understood years earlier. Item 19. $20,000.

Another man who understood the dangers before most others, but was unable to act until the situation had worsened considerably, was Winston Churchill. Writes Churchill in a speech he delivered, "We are fighting for all that is most dear, whether it be honour, or safety, or life." Speaking of France and Russia, he continues, "...they look to us to be the prop and mainstay of the cause of freedom until the great Republic of our kith and kin across the Atlantic can bring its mighty and decisive force to bear. Never was there such a crisis!" The kith and kin Churchill was awaiting was, of course, the United States. However, this speech was not from the early days of the Second World War. It was from the First. The date was July 27, 1917, and unbeknownst to him, Churchill was performing a dry run for an even greater crisis two decades later when finally, Britain turned to him to save the country. Item 16. $26,000.