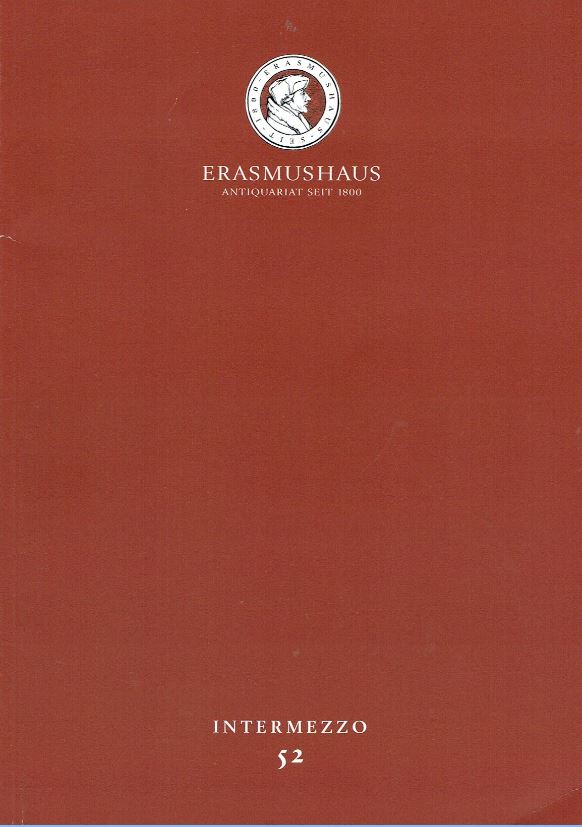 Swiss bookseller Erasmushaus has issued a new catalogue, Intermezzo 52. An intermezzo, in music, is a shorter section between the major parts of a work. We imagine that applies to this catalogue, placed between a few larger ones. There is no further description of what is inside, but we can note that it contains a variety of serious works dated prior to the 19th century. The catalogue itself is written in German, but Erasmushaus says that descriptions are available in English on request. Books are in German, Latin, French and English. Here are a few of the items offered.

We begin with what Erasmushaus describes as "the first architectural book for the Americas." It was published in that most important American year – 1776. However, it is not meant for the soon-to-be United States, and even less so for Canada. It was intended for use in the Caribbean colonies. The author was the Chevalier d'Albaret, first name unknown, the title, Différens projets relatifs au climat et à la manière la plus convenable de bâtir dans les pays chauds, et plus particulièrement dans les Indes Occidentales. That translates to "different projects relating to the climate and the most suitable manner of building in hot countries, and more particularly in the West Indies." It consists of nine home plans for the tropics, with their heat, heavy rains, and the possibility of hurricanes, earthquakes, and slave revolts. So they were practical rather than ornamental designs, including covered courtyards to protect from sun and rain, well-drained roofs, lots of ventilation, low-rise structures for protection in earthquakes, frames filled with bricks. One house offers a protection from slave revolts reminiscent of Middle Ages castles. Albaret has surrounded it with a moat, the only entrance being reached via a drawbridge. While the intention was practicality, the criticism of his designs was that they sound more practical than perhaps they really are (a moat and a drawbridge?). Item 8. Priced at CHF 28,000 (Swiss francs, or approximately $27,710 U.S. dollars).

George Sinclair was the son of a Scottish gardener, who became a gardener himself. He was hired to that position by the 6th Duke of Bedford at Woburn Abbey, a massive estate with spectacular landscape gardens. However, Sinclair did not limit himself to tending the gardens, but carried out important research. His discovery that fields planted with mixed vegetation were more productive than those with a single type was influential on Darwin's thinking. In 1816, he published the first edition of this book, Hortus Gramineus Woburnensis: or, an Account of the Results of Experiments on the Produce and Nutritive Qualities of Different Grasses and other Plants. The first edition had actual specimens of dried grasses inside, but subsequent editions used lithographed plates. This book covers his research on which types of grasses are most productive as a source of animal fodder. Item 70 is a third edition from 1826. While this edition is not otherwise special, this copy is. It is imprinted in gold on the cover, "To Nicholas the First Emperor of all the Russias. Presented by the Author." It also is marked with the Imperial Stamp of the private library of Nicholas I. CHF 4,500 (US $4,455).

Item 24 is the most notable work of French author Jacques Cazotte. He worked for the French ministry in Martinique for several years before returning to Paris and taking a shot at success with a pen at the age of 40. He wrote less than weighty material that nonetheless became popular, with some fantastical children's stories. In 1772, he published this book, Le Diable Amoureux (the Devil in love). It was his best, a satirical piece, with etchings that make this first edition very desirable. He later became a follower of mysticism, described as a "mystical monarchist." The second part of that description proved his downfall when the French Revolution swirled out of control. Cazotte was guillotined in 1792. CHF 3,500 (US $3,467).

Next is the Experimenta Nova of Otto von Guericke, published in 1672. Guericke was a 17th century German scientist and inventor, whose achievements are surprisingly overlooked. He attacked the standing belief, "nature abhors a vacuum," convinced that vacuums could exist. He developed an air pump capable of creating vacuums. He demonstrated the effect by putting together two copper hemispheres from which the air had been evacuated. Teams of horses pulling each of the hemispheres were unable to separate them. Guericke recognized that it was not some attribute of the vacuum inside that made them impossible to separate, but rather the effect of the air pressure on the outside. He also was able to counter claims that such air pressure was not possible or we would all be crushed by explaining that the air pressure comes at us from all angles. Guericke developed a barometer to measure air pressure and realized it varies at different times. He also discovered that variations in air pressure could portend changes in the weather, developing the first method of meteorological forecasting. The book also describes Guericke's experiments with static electricity. Item 35. CHF 42,000 (US $41,617).