A Millennium of Jewish Culture from Shapero Rare Books 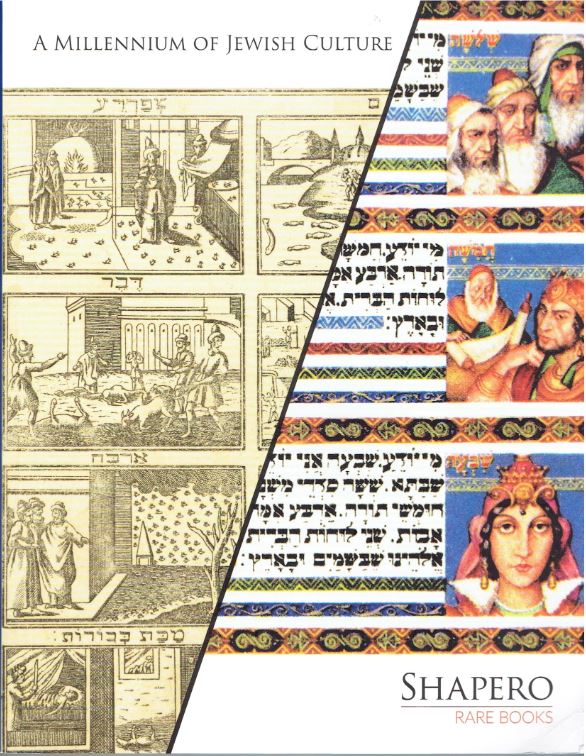 A thousand years of Jewish culture.

Shapero Rare Books has released a catalogue of A Millennium of Jewish Culture. Perhaps we could call this "recent" Jewish culture since it only includes material from the last thousand years. Numerous subjects and types of material are covered in this catalogue, so here we go: Prayer Books, Bibles & Pentateuchs, Haggadot, Esther Scrolls, Ketubot (marriage contracts), Cookery & Kashrut, Traditions & Rituals, Kabbalah, Medicine, History Philosophy & Poetry – Western Europe & England, History & Poetry – Eastern Europe & Russia, Zionism, British Mandate, State of Israel, Photography, Signed Portraits, Art, and Holy Land Pilgrimage & Maps. Naturally, the religious material relates to times even more distant than a thousand years ago, while European cultural aspects and items related to Israel refer to the last century or so. Here are a few samples of the items to be found in this thoroughly described and illustrated catalogue of Jewish culture.

We start with a book of prayers from 1687, Me'ah Berachoth – Orden de Bendiciones, edited by Benjamin Godines. It contains blessings for the entire year in accordance with the Sephardic tradition. It was published in Amsterdam specifically for Marrano refugees. These were Jews from Spain and Portugal forced to convert to Christianity on pain of death. It is written in both Hebrew and Spanish, with an introduction in Portuguese. Among prayers for the sick is a sad, today incomprehensible one specific to the Marranos' past – a prayer for martyrs burned at the stake by the Inquisition. Item 1. Priced at £6,750 (British pounds, or approximately $8,331 U.S.).

It has long been a debate, or balancing act, among Jewish communities in the various lands in which they called home, to what extent they should use Hebrew in their rituals and how much the language of their homelands, more likely to be better understood by most of their people. Item 17 was a breakthrough for the community in England: The Passover Haggadah Containing the Ceremonies and Prayers which are used and read by all families in all houses of the Israelites... The prayers may have been used by all families but not the language. This was the first Haggadah in the English language, translated and published by Alexander Alexander in London in 1770. A Haggadah is a book with the prayers and directions for the Passover Seder, a ritual going back thousands of years to celebrate the Jews Exodus from Egypt. £35,000 (US $43,198).

Item 4 is Seder HaTephilloth mi'Kol HaShanah Kemihog-polin (all year prayer book according to Polish custom). This is a siddur, or Jewish prayer book for all occasions throughout the year. A siddur is a prayer book for daily use, the term meaning order or arrangement, guiding readers through daily activities. This siddur was printed in Amsterdam in 1791, and comes in a luxurious red velvet binding with gilt metal clasps and ornaments. It was a wedding gift to Blanche Rebecca Adler, the granddaughter of the Chief Rabbi of Britain, who was married on July 22, 1891. £3,950 (US $4,875).

Maimonides was a great scholar of the 12th century. Born in what is today Spain, he later made his way to Egypt when a change in Moslem rulers made life dangerous for Jews. In Egypt, he became a leader of the Jewish community and wrote his great treatises on Jewish law. His work remains enormously influential today. However, his day job was a doctor, and he became court physician to Saladin, the first sultan of Egypt and Syria, who defeated the Crusaders. After Saladin's death, Maimonides continued in that role to his son and successor. It was at this time, in 1198, that he wrote De regimine sanitatis ad soldanum babyloniae (regimen of health for the Sultan of Babylon). As with his religious and ethical writings, his medical books were very influential for a long time. His medical books used both existing medical theories and his own experiences. Maimonides recognized the importance of the connection between mind and body, that mental well-being was important to physical health. The respect for his medical work and how long it remained influential can be seen by this printed edition of his work almost two centuries later. He wrote the book in Arabic, but it was later translated to Hebrew and then to Latin. This edition was published by a Dominican nunnery in Florence circa 1481. Item 40. £35,000 (US $43,198).

Item 52 is a look at a world that no longer exists: Di Farshvundene Velt (the vanished world). It was edited by Raphael Abramovitch and published in 1947. This book is a compilation of photographs of Eastern European Jewish life in the 1920's and 1930's, before most of the communities were wiped out by the Nazis. It is divided into two sections, Jewish cities and Jewish people. The photographs were culled from thousands of postcards, personal family photographs, and the archives of the Daily Forward. It is likely the best look you will find at these once thriving communities. Abramovitch was a a Russian socialist, part of the Menshevik faction that lost out to the Bolsheviks. He was forced to flee Russia for Berlin, forced to flee Berlin for France when the Nazis came to power, and forced to flee to America after the Nazis invaded France. He became a steadfast opponent of both the Nazis and the Soviets. £750 (US $925).