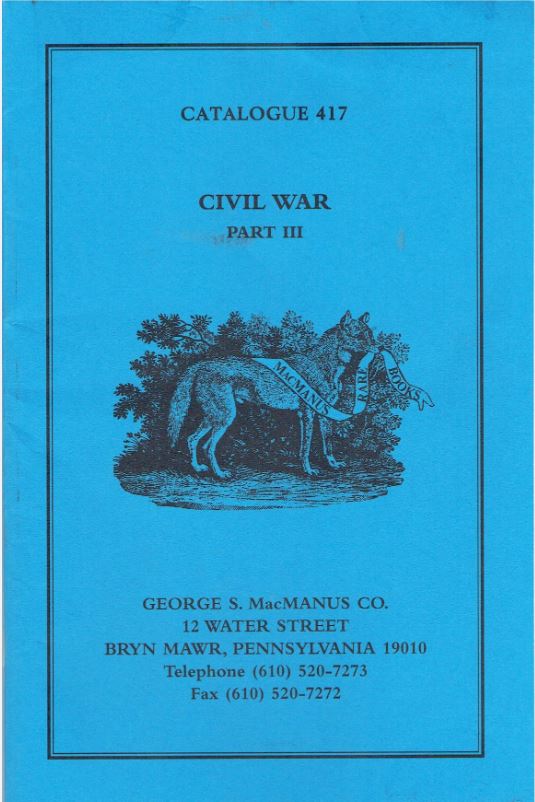 The George S. MacManus Company has released their latest selection of Civil War material, Catalogue 417 Civil War Part III. MacManus has a large collection of material from America's terrible internal struggle. This group of almost 500 books and pamphlets covers only authors with names ranging from Crocker to Farber. We can anticipate several more catalogues to come. There are many items from each side's point of view (perhaps a few more Southern), and numerous regimental histories from both sides of the border. Here are a few samples from this latest selection.

The election of Abraham Lincoln in 1860 certainly did not please the South, but that didn't mean the southern states were in a rush to immediately secede. There was much caution, particularly in Virginia, which did not join the cause until asked to start providing soldiers for the Union army. However, there was an instigator, who pushed the other southern states to join it in secession the month following Lincoln's election. That instigator was South Carolina. South Carolina had pushed for secession three decades earlier during the nullification crisis with no success in convincing other southern states to join. This time it was different, the other southern states falling like dominoes to her entreaties. Item 226 is the Report on the Address of A Portion of the Members of the Assembly of Georgia. The report is signed in type by W. F. DeSaussure and dated December 22, 1860. It urges a reluctant Georgia to join in secession. Georgia had urged South Carolina not to take any separate action until a convention of southern states could be held. In this report, DeSaussure claims that South Carolina did not want to take the lead, but that "the blow inflicted by the election of an enemy to Southern institutions, elected by Abolition States upon Abolition issues" was too much to bear. The result, he continued, is just two choices, "one to patch up a hollow truce with anti-slavery, which denounces our Institution as a crime, and which will hold all the power of the Government in all its departments in all time to come," or to secede and form a southern confederacy. Priced at $950.

From the beginning we move close to the end. Not just the end of the war, but the curtain call for its veterans. Item 57 is The Last Review: The Confederate Reunion, Richmond 1932... It was written by Virginius Dabney, a journalist whose grandfathers had fought for the South. The United Confederate Veterans was formed in the 1890's, when many former southern soldiers were in the prime of life. They had thousands of "camps" all around the South where they would gather to tell stories. This was no longer a military force, but a social group. They would then hold annual conventions where veterans and family could attend. In 1911, 106,000 came. Alas, a veterans' group representing one particular war has its demise built into its DNA. It cannot outlast a generation's lifetime, hence this "last call" in 1932. Still, there were 1,500 veterans, all over the age of 80, able to attend. Dabney's account includes numerous photographs, a reproduction of the program, and a stirring editorial, "The Last Parade," penned at the time by Douglas S. Freeman. He speaks of how "Today the city had its last review. The armies of the South will march our streets no more. It is the rear guard, engaged with death, that passes now. Who that remembers other days can face that truth and still withhold his tears?" While 1932 represented the last major event, the veterans did continue to hold reunions as late as 1951, though it is dubious the three claimed "veterans" who attended that event really were. Dabney's book came even later, this first edition published in 1984. $25.

Next up we have a remarkable address read to a camp of Confederate veterans in 1904 by James F. Crocker: Prison Reminiscences, An Address Read Before Stonewall Camp, Confederate Veterans... Crocker had been seriously wounded at Malvern Hill, but recovered to fight at Gettysburg. He participated in Pickett's charge. He was wounded again, not as badly, and taken prisoner. However, he does not recount a story of prison brutality, but rather, one of kindness shown by his captors and others in the North. A few days after being captured, in need of some new clothes, he was allowed to travel alone to Gettysburg. "The fields and woods were open to me. They somehow knew – I know not how – that I could be trusted; that my honor was more to me than my life." He would later be transferred to Long Island, where he became a leader among the inmates. Again, he recounts that he was treated fairly. The treatment did not change his views about the justness of the war. He remained a strong Confederate supporter and almost to the end was convinced that the South could only be defeated if its people were wiped out. Still, he came to the conclusion that the differences were national, not personal, and that individuals could still be cordial to those on the other side. Crocker was evidently a man of high principles and manners, and undoubtedly this played a role in the respect with which he was treated by those from the North. Item 2. $1,750. Item 3 is a copy of this book with a presentation inscription from the author. $2,000.

Now for a Confederate who was not treated so humanely - item 256 is the Diary of Ephraim Shelby Dodd. Member of Company D Terry's Texas Rangers. December 4, 1862 – January 1, 1864. It was not published until 1914. Dodd was a Confederate soldier who engaged in various reconnaissance missions. He didn't wear typical Confederate attire, wearing a captured Union jacket and blue pants, though he had a hat with a Texas Ranger's star. At first this did not cause suspicion, but when it was discovered he had a diary, everything changed. There were some passages that could be interpreted to imply that he was a spy, though hardly conclusively so. More likely, statements of being misconstrued for a Union soldier and hiding out were what any Confederate soldier would be pleased to mention. A rump trial was held on January 1, 1864, the date of his last entry, and Dodd believed he had been acquitted. Instead, on January 5, he was informed he would be hanged. That he was, on January 8, though the rope broke the first time and Dodd, injured in the fall, was marched up the gallows for a second, successful attempt. On the gallows, he again proclaimed his innocence. There has been much speculation as to why he was executed, whether it was because it was truly believed he was a spy, revenge for Union soldiers similarly executed, or as a warning to those from the South who were spies or wore Union clothing to deceive the other side (apparently a common occurrence at the time in border state Tennessee where he was captured). $250.