Books on Many Things from Raptis Rare Books 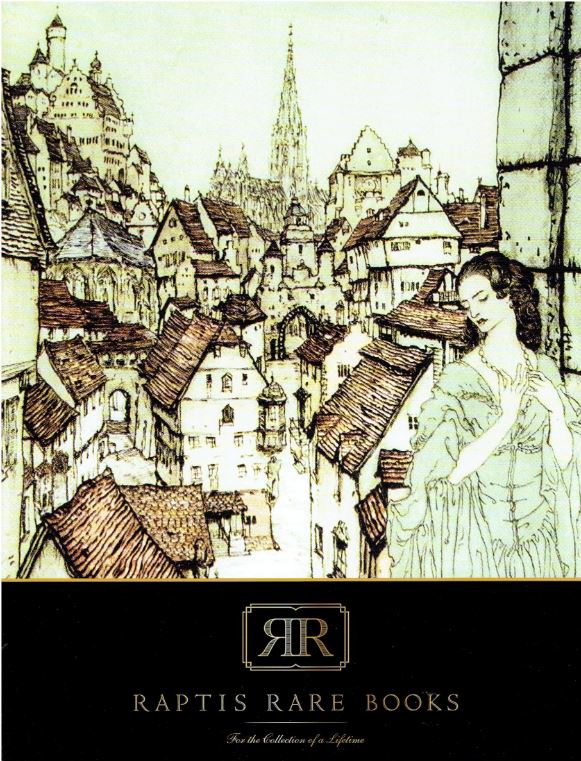 Raptis Rare Books, now of Palm Beach, Florida, recently released a new catalogue of books. It does not have a discernible title, but the table of contents sums up what sort of material is to be found – featured items, literature, children's literature, nonfiction, science & natural history, history & American presidents (editor's note: no Donald Trump yet), biography & autobiography, travel & exploration, art, photography & design, golf, cook books, and economics & finance. There aren't too many collectors who won't find something of interest among those topics. Here are a few varied samples from this selection.

We begin with a poignant reminder that no matter how important and powerful, we are all susceptible to tragedy and deep sorrow. In the case of England's then longest reigning monarch, Queen Victoria, that sadness lasted 40 years. The Principal Speeches and Addresses of His Royal Highness The Prince Consort is a collection of speeches by Prince Albert, Victoria's husband. Albert came from part of what is today Germany to marry the Queen, hence his unkingly title. However, he took on numerous responsibilities on the Queen's behalf, influential in policy and gaining greater respect from the British public as the years wore on. And, Victoria loved him dearly. If most royal marriages are little more than political alliances, this one was different. Unfortunately, while the Queen reigned for 63 years and lived for 81, Albert died at the age of 42. His speeches were published posthumously in 1862, he having died the previous year. This copy is inscribed by her a year after Albert's death to Sylvain Van de Weyer, a former Prime Minister of Belgium: "To M. Van de Weyer In recollection of the sincere friendship which existed for so many years between him & the beloved Prince brokenhearted widow Victoria Reg." She never got over the loss of Albert, continuing to mourn him the remaining 40 years of her life. Item 18088. Priced at $8,800.

This man's marriage was as volatile as Victoria and Albert's was stable. F. Scott Fitzgerald and his wife, Zelda, were poster children for the Jazz Age and all its extravagances and decadence. The volatility of their personalities enabled them to reach great heights in their relationship early, followed by years of lows, exacerbated by Zelda's increasing mental issues. She would end up institutionalized, while he drank himself to death at the age of 44. Fitzgerald's classic of his times is The Great Gatsby, his most notable portrayal of the lifestyle he lived. Item 18067 is a 1925 first edition, first state. It is particularly notable as it was the personal copy of, and is signed by, Sheilah Graham. She was a Hollywood gossip columnist, and more notably, Fitzgerald's last lover. He had moved to Hollywood to be a screenwriter, a job he hated but he needed the money. Zelda now in an asylum, Scott and Graham moved in together. They only had a few years together until Fitzgerald's ways brought an end to his life in 1940. It was she who found him, dead from a heart attack. $8,800.

The recent presidential election reminds us of the importance of political debates. However, no debates were more memorable than those of Lincoln and Douglas, and they weren't even presidential. Abraham Lincoln and Stephen Douglas would match up in the presidential election of 1860, but their famed debates took place two years earlier when they were running for the senate. That time, unlike in 1860, Douglas won. Nonetheless, Lincoln's performance was so outstanding that he decided to compile accounts of what was said at the debates and produce it in time for the 1860 election. Item 16003 is Political Debates between Hon. Abraham Lincoln and Hon. Stephen A. Douglas, In the Celebrated Campaign of 1858, in Illinois. Lincoln had clipped out newspaper accounts of their speeches, and published more or less what was said in 1860, in time for the presidential election. $8,200.

No one has popularized science quite like Carl Sagan. Sagan was a scientist in general, astronomer in particular, and a writer, though not all that well known when he began his Cosmos television series. It was a huge hit, the most popular series ever to run on Public Television. Sagan would explain the mysteries of the universe to an audience of ordinary people. It made him controversial in the scientific community, finding his programs somewhat less than scientifically rigorous, but Sagan understood that science needed an educated public to support the funding needed to carry out research. He felt it would receive greater public support if the people paying the bills understood its importance. To go along with the series, Sagan published a book of the same name – Cosmos – in 1980. It is the best-selling science book in the English language ever published. This copy has been inscribed "To Les and Edie, with love and every good wish," on September 28, 1980. Les and Edie were his in-laws. Item 15097. $6,500.

Those old enough to remember Alfred Hitchcock's television show, Alfred Hitchcock Presents, will appreciate this item. Hitchcock was a film director, a master of suspense and fear. His television show offered shorts of the type of mysteries found in his movies. The show opened with a character sketch of Hitchcock's profile. He would walk on stage, his actual profile eclipsing the character, after which he would announce "Good Evening." Most people were probably unaware that the spartan character sketch was created by Hitchcock himself. Item 21011 is a copy of that sketch, drawn by Hitchcock and inscribed by him. $2,800.

Item 15085 is a framed original copy of the New York Times. It was a bad day. Specifically, it was from "Black Thursday," October 25, 1929, the first day of the stock market crash. The headline screams, Worst Stock Crash Stemmed By Banks; 12,894,650-Share Day Swamps Market; Leaders Confer, Conditions Sound. Not exactly. Bad as it was, no one had any idea on October 25, 1929, just how long and bad the times would become. Ten-plus years of the Great Depression lay ahead. As for that massive 12.8 million share trading day, Apple alone now trades three times as many shares on an average day. $5,000.