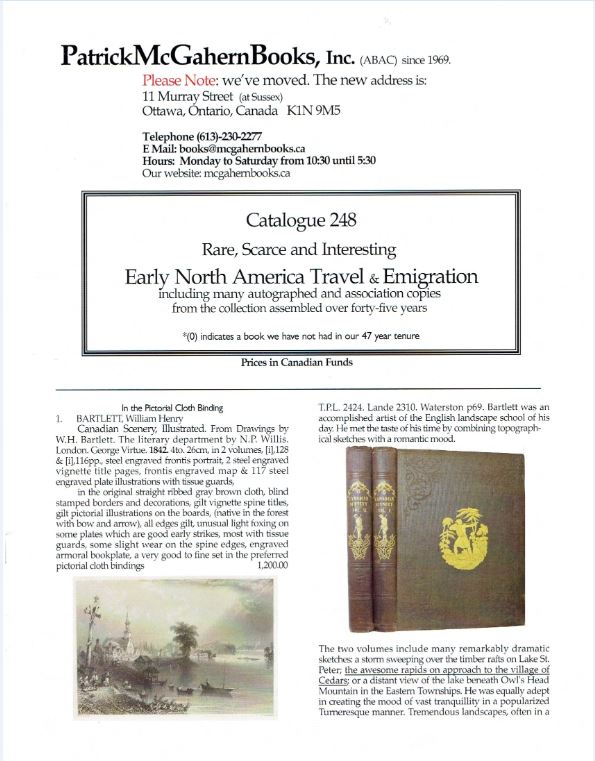 Travels and emigration to North America.

Patrick McGahern Books recently published a catalogue of Rare, Scarce and Interesting Early North America Travel & Emigration, including many autographed and association copies from the collection assembled over forty-five years. There are many 18th and 19th century travel accounts here, with most focused on Canada. Not surprisingly, the U. S. is also involved in numerous accounts. Traveling Europeans often targeted both lands, and when you go back to the 18th and early 19th century, the border between those two countries was not always clearly defined. Now, here are some samples from McGahern's Catalogue 248.

We begin with a journey to Canada and the U.S., or perhaps to neither. Nothing like a riddle. The traveler was Pierre Francois Xavier de Charlevoix. He explored parts of Canada, more of the U.S., but in the early 18th century when commissioned by France to explore the land, it was still known as New France. Charlevoix carried out two expeditions. Item 7 is an account of the second: Journal of a Voyage to North-America. This is an English translation of the third volume of Charlevoix's 1744 account of both of his trips, this one having been published in 1761. He traveled to Lake Superior and along the Mississippi River. The goal was to find a route to the "western sea," but we now know he was nowhere near finding it. Any connection to the Pacific was still too far away. He did come back suggesting the Missouri River likely led somewhere close to it, and that would be the route Lewis and Clark would take on their successful journey to the Pacific almost a century later. While the primary mission was not accomplished, Charlevoix did return with much information about the geography, natural history, and natives of the land. Priced at CAD $5,000 (Canadian dollars, or approximately $3,700 in U.S. dollars).

Here is another, almost as early account of areas that are now part of the United States and Canada. The writer was Peter Kalm (or Pehr Kalm), who came from Sweden, but for different purposes. Kalm was a naturalist, a disciple of Linnaeus, the botanist and zoologist noted for creating the modern system of taxonomy of species. Kalm came to collect seeds and study American botany. He arrived in 1748 and stayed until 1751. The first six months were spent in Philadelphia, meeting with notable American botanists. This time is covered in volume 1. The second volume covers the time he spent at the Swedish settlements in New Jersey. The last volume covers his travels to Niagara Falls and on to Canada, spending time in Montreal and Quebec City. The title is Travels into North America... published 1770-1771. Naturally, the book contains much about the flora of the land, but also covers topics such as the civil, ecclesiastical, and commercial relations of the country and the manners of its inhabitants. Item 25. CAD $10,000 (US $7,400).

Next up is a thorough description of Canada from 1839: An Historical and Descriptive Account of British America, comprising Canada, Upper and Lower... by Hugh Murray. The timing required constant updating as the book was being finished, this being the time of the unsuccessful Canadian rebellion. Hugh Murray did not bring personal experience to his work. I don't know that he ever even saw Canada. However, he had access to much previously written material, including French accounts apparently overlooked by others. He also had access to George Simpson, Governor of the Hudson's Bay Company, and various other people with deep experience in Canada. The book provides detailed information about Canada not just for the curious, but for use by emigrants as well. This copy comes with an interesting provenance. It was once owned by Sir Hugh Allan, and since it is dated 1839, it was evidently purchased new. Allan came to Canada from Scotland, and eventually he would operate the largest private shipping company in the world. By the time he purchased this book (1839), it was already the largest in Canada. That this book was designed to aid immigrants is noteworthy as the "Allan Line" transported large numbers of immigrants to Canada. Allen's wealth became so great that in 1863, he built Ravenscrag, a 72-room mansion in Montreal today part of the McGill University medical school. When he died in 1882, Hugh Allan was one of the wealthiest people in the world. Item 35. CAD $750 (US $553).

Frederick Law Olmstead is perhaps America's most notable landscape architect. His specialty was city parks, though he designed landscapes for many notable residences as well. His most notable design is America's most famous urban park, New York's Central Park. While most of his work was performed in the United States, here is a major design from Canada. Item 39 is Olmstead's design for Mount Royal, Montreal, published in 1881. It includes the 1877 folding Mount Royal Design Map. Mount Royal is a large park built around a small mountain in Montreal. However, the completed park did not fully meet the designs in Olmstead's plan. This book appears to be quite rare. CAD $5,000 (US $3,700).