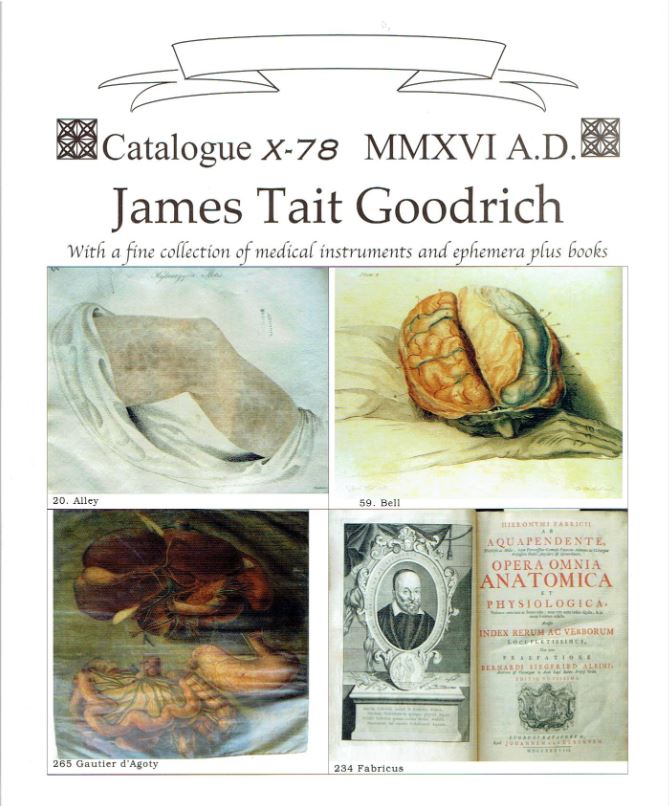 James Tait Goodrich has issued his Fall 2016 Catalogue X-78, History of Medicine and Science, Pre-Columbian Artifacts, Medical Instruments and Antiques. The old medical instruments are scary, especially since many predate anesthesia, the ancient artifacts fascinating, but most of the over 500 items are books and other printed material. Many items are clearly appropriate for those who collect, and understand, serious medical papers. They will be beyond the full understanding of many of us. If you are a physician collector or serious student of medical history, you will find material here you are unlikely to come across anywhere else. Then, there are also items that those of us less expert can still understand, or whose importance we immediately recognize. We will focus more on this sort of material in this review, but those with a deeper understanding of the more technical aspects of medicine and surgery will find much more to appreciate. Here, now, are a few samples.

This is an unpleasant sounding title, but it represented a major milestone in medicine: Some account of a Case of Obstinate Vomiting, in which an attempt was made to Prolong Life by the Injection of Blood into the Veins. This was the first case of blood transfusion, and the performing physician and author was James Blundell. His article appears within this 1818 volume of Medico-Chirurgical Transactions. Blundell's patient received a transfusion via a syringe and funnel device based on principles still in use. He recognized the importance of finding a good vein and of keeping air out of the blood stream. What he didn't know about at the time was the difference in blood types and compatibility issues. Then again, neither did anyone else, which is why transfusions were hit or miss and not regularly performed for another century, when this point was finally understood. Blundell's patient survived for 56 hours before succumbing. Also found in this volume of the journal is Of a Periodical Affection of the Eyes and Chest, by John Bostock. This was the first accurate description of hay fever. Item 81. Priced at $495.

Here is another milestone in surgery: Etherization; with surgical remarks. The surgeon was John C. Warren, and what he described in this 1848 account was the first surgery using anesthesia, performed two years earlier. Warren had removed a tumor from the jaw of a man using a then unidentified substance provided to him by W. T. G. Morton. The patient endured the surgery without experiencing pain. Item 26. $1,295.

Morton struggled in the years ahead to get the credit, or compensation, to which he believed he was entitled for his monumental discovery. There were debates about his role, and many supported Morton's claim and wished to see funds raised to reward his efforts. Item 27 is Proceedings in behalf of the Morton Testimonial, published in 1861. This paper supported Morton's claims. The following year, Morton volunteered as a surgeon in the Union army and used his skills to reduce the pain suffered by Union soldiers requiring surgery during the Civil War. Item 27. $395.

Next is a description of a "fatal disease," but this one is tongue-in-cheek. It is also a book collector's classic. Item 221 is Bibliomania; or Book-Madness; containing some account of the History, Symptoms, and Cure of this Fatal Disease. This came from the pen of rabid book collector Thomas Frognall Dibdin, published in 1809. Didbin was an obsessive book collector, and as many book collectors (even more so their spouses) realize, it is incurable. Two centuries later, it still exists (though perhaps not quite as common as it once was). $1,495.

Oliver Wendell Holmes was a many talented man. He was a novelist, poet, professor, legally trained (though not a lawyer), and a medical doctor. He taught at medical school and was a supporter of medical reforms. Still, this autocrat of the breakfast table was best known to the general public as a writer. Here is a wonderful piece for those who collect, or just appreciate Holmes. It's a signed single leaf, from October 11, 1875, containing a hand-written original poem. It goes:

"A few can touch the magic string

And noisy fame is proud to win them;

Alas for those who never sing,

But died with all the music in them!"

Medicine isn't always for the fainthearted, all that blood and guts. Still, some things are even more gross to the uninitiated than most. Here is one: Treatment of chronic osteomyelitis with maggot larva of the blow fly. This article is found in a 1931 issue of the Journal of Bone and Joint Surgery. The author was William S. Baer, the article published after his death (not even blow fly maggots could save him). With all seriousness, Baer was a Baltimore physician who served during World War I. He noticed that the wounds of soldiers that were covered with maggots were the cleanest and least infected. He used that lesson to experiment with the use of maggots in cleaning bone wounds, his specialty. This is akin to the disgusting sounding, but effective use of leeches to clean wounds of blood. Goodrich notes that projects have recently been initiated to again look at the use of maggots in cleaning wounds – "ancient treatments coming back to life again." Item 42. $225.