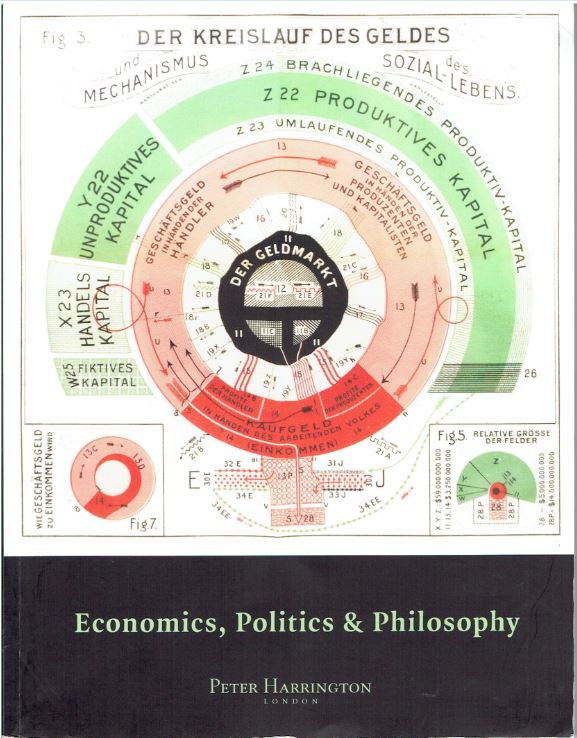 Peter Harrington recently issued a catalogue of Economics, Politics & Philosophy. There is much thought-provoking material here. This is serious stuff. There is no fiction, at least not intentionally so, though some things are undoubtedly less than accurate. This happens with economics, politics, and philosophy. Nonetheless, if any of these fields is your bailiwick, you will find many appealing books in this catalogue. Here are a few.

The statement of classical economics, and undoubtedly the most influential book in the field, was published in 1776, Adam Smith's An Inquiry into the Nature and Causes of the Wealth of Nations. It came at a time when an overwhelmingly agrarian society was just beginning to move toward industrialization. Smith argued for the beneficial effects of allowing the market to make most decisions. He understood that each individual in the marketplace was acting out of self-interest, not public interest. However, when all of these actions were combined, he believed the results were best for all. He states, "It is not from the benevolence of the butcher, the brewer or the baker, that we can expect our dinner, but from their regard to their own interests." This was the "invisible hand," all of these essentially selfish acts resulting in our having food on the table. In this era, nations slapped all kinds of tariffs on each other, an interference with the market system Smith opposed. Item 170 is a first edition of Smith's classic. Priced at £110,000 (British pounds, or about $137,570 U.S. dollars).

The economist most known for believing the government needed at times to become involved in spurring on the economy was John Maynard Keynes. His response came during the Great Depression, when the "invisible hand" was not working as well as it had in prosperous times. However, he was prescient of troubled times ahead long before the stock market crashed in 1929. Item 89 is Keynes' The Economic Consequences of the Peace, published in 1919. Keynes attended the peace conference at the conclusion of the First World War as a representative of the British Treasury. However, he had little authority. Appalled by what was happening, Keynes resigned and wrote this book. He saw the punishing war reparations being placed on Germany as being beyond that nation's ability to pay. That, in turn, he foresaw, would lead to chaos in Germany, which would then spread to the rest of Europe. Unfortunately, he was correct in what he saw and two decades later, Europe would once again be enveloped in another, even more deadly, war. £1,750 (US $2,193).

A man with more traditional economic ideas at the time of the Great Depression was the U. S. President, Herbert Hoover. Hoover had built his reputation as a great humanitarian after the war when he was appointed by President Wilson to head up the United States Food Administration (later American Relief Administration). He had worked miracles to save much of Europe from starvation. Unfortunately, he not so successful at feeding America when the Depression led to massive unemployment. There were no chickens, and often not much else, in every pot. Nonetheless, Hoover stuck to his guns, even after his massive defeat when he sought reelection in 1932. In 1934, he published this book, The Challenge to Liberty. It argues that the government programs Franklin Roosevelt had initiated to pull the country out of the Depression were threatening the people's freedom. Hoover's influence was little beyond those already believers. Hungry people had more urgent concerns on their mind in 1934. This copy is inscribed by Hoover to Philip D. Carroll, who had worked with him feeding Russians at the ARA years earlier. Item 69. £875 (1,097).

It wasn't quite as bad as the Depression, but life was tough for many, unseen Americans long before the Depression. At the turn of the century, when immigrants were pouring in from Europe to fill manufacturing jobs, their pay and working conditions were poor, their tenements cramped and dingy. In 1890, Danish-American social reformer Jacob Riis took his camera into the neighborhoods where recent immigrants lived to capture their living conditions. Item 151 is a photojournal account of what he saw, and it wasn't pretty. The title is How the Other Half Lives. Studies Among the Tenements of New York. Riis photographed the slums of New York with their dark, overcrowded apartments filled with extended families. He was a pioneer of flash photography, enabling him to illuminate the darkness of these homes. Riis also found other problems that accompanied poverty – poor sanitation, alcoholism, and child labor. He believed that if he could make middle and upper class people see what life was like in the slums, they would be motivated to do more to help. One person who was moved by Riis' work was Theodore Roosevelt, who would go on to be one of America's greatest progressive reformers. £3,250 (US $4,067).

Here is a topic still debated today – The Subjection of Women. Not too many people still argue for lower status for women, even if too many still allow it, but in 1869, few supported equal rights for women. One exception was the philosopher John Stuart Mill, who wrote about the topic in this book. His father, the utilitarian John Mill, was a liberal man for his times, but even he figured women's interests would be adequately protected by their husbands and fathers. The son evidently understood the real world a little better. John Stuart expanded the "greatest good for the greatest number of people" utilitarian philosophy to recognize that personal liberty was also essential to a good life, even if a majority wished to deny it to others. Item 117. £2,250 (US $2,815).