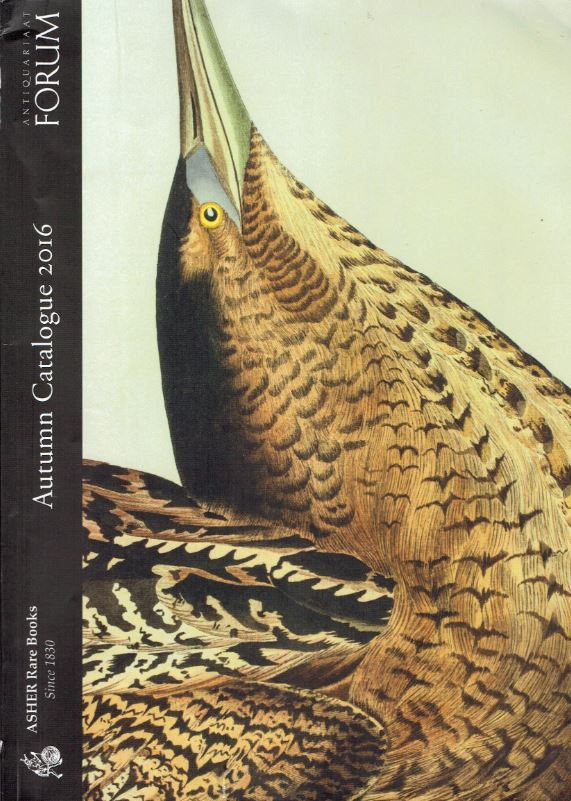 The Antiquariaat Forum and Asher Rare Books have published their Autumn Catalogue 2016. There is no overall description of the material as it varies. However, there are some general parameters. There are no novels here. It is nonfiction. Travel forms a large part of what we find, though only a limited amount pertains to exploring voyages. It is more about what is out there, be it natural history, medicine, trade, disputes and battles, pictures, customs and such, the things you would learn about as a result of traveling afar. Most of the books are old, some very old, only a few inching their way into the 20th century. Some are Dutch, like these booksellers, but many are in English, French, Latin, and other European languages. Here are a few specific examples.

We begin with a very old book, Liber de proprietatibus rerum Bartholomei Anglicus. It was published in 1485, though the actual writing goes back over two centuries earlier. The title translates to "On the Order of Things by Bartholomaeus Anglicus," or Bartholomaeus the Englishman. He is believed to have studied at Oxford, but he first clearly appears as a teacher in France. He was also a Franciscan, most scholars of the day being associated with a post in the church. His book is considered as a precursor of, or perhaps the first encyclopedia. Bartholomaeus lived in the 13th century with the original publishing (though obviously not printing) date for his work given as 1240. Along with the original Latin there was a French translation. Bartholomaeus covers all sorts of topics, hence its reputation as an encyclopedia. Divided into 19 "books," he covers theology, the soul, the human body, disease, astronomy, weather, plants and animals, geology, colors, measurements, time and more. One book covers places, providing one of the earliest European descriptions of Arabia. Bartholomaeus used many sources in creating his encyclopedia, some now lost. It was very popular in medieval times, first being printed in 1471. This 1485 edition came from Strasbourg. Item 19. Priced at €28,000 (euros, or approximately $31,041 U.S. dollars).

This next book comes from the same eras, both originally and printed. Albertus Magnus has been described as the greatest German philosopher/theologian of the Middle Ages. He was also learned in the sciences, and carefully studied the works of Aristotle. As with Bartholomaeus, he was associated with the Church, a Dominican rather than a Franciscan, and lived in the 13th century. He was a Renaissance Man before there was a Renaissance. However, he did not write this book. It is attributed to him, but all the focus on magic is inconsistent with his writings. It more likely was written by one of his pupils. The title is Liber secretorum de virtutibus herbarum, lapidum et animalium quorundam, and this is an early issue (1502), probably one of the first four or five editions. It covers the extraordinary, even magical powers of plants, animals, and minerals. It talks of interpreting dreams, prophesying the future, becoming invisible, mental manipulation of matter, and such speculations not typical of Albertus. Item 6. €12,500 (US $13,889).

One of England's greatest naval victories came against the Spanish Armada in 1588. Perhaps it led to a certain overconfidence years later when England decided to attack Spain, the infamous Cadiz Expedition. The better comparable would have been that the invading party, in 1588 the Spanish rather than the English, got slaughtered on the other team's home field. Newly crowned Charles I authorized the Duke of Buckingham to put together a fleet of 100 ships to attack Spanish vessels laden with treasure returning from America. The idea was to steal the riches while weakening Spain. It didn't turn out that way. The vessels were primarily converted merchant ships, operated by owners more concerned with protecting their ships than winning great victories. The plan quickly went awry when a storm delayed the ships' arrival off of Spain. The treasure ships were already safely in port. The mission's commander instead decided to attack Cadiz. The landing was successful, but the men inadequately provisioned. To make up for this, they were allowed to confiscate Cadiz's wine supply. They became drunk and were routed by Spanish soldiers, 1,000 Englishmen dying in a battle in which they provided no resistance. The English were forced to retreat home, lives and money wasted, nothing gained. Item 153 is an account of the disaster, Copia de un papel impresso en Olanda, hecho en noviembra passado de 1625. This translates to copy of a paper printed in Holland in 1625. This is the first and only Spanish edition of this pamphlet first printed in Holland (the Spanish edition also was published in 1625). Presumably, it would have been appreciated more in Spain. €1,950 (US $2,164).

Is this the quintessential work on Hungarian spiders? How could it not be? The book describes 1,000 species of them, including 700 detailed figures. This book will probably make you never want to visit Hungary. The title is Araneae Hungariae secundum collectiones a Leone Becker... Many of the spiders were collected by Belgian painter Leon Becker, but the authors were Hungarian physician Cornelis Chyzer and Polish zoology professor Wladyslaw Kulczynski. It was published in two volumes, 1891-1897. This copy was inscribed by Chyzer to German arachnologist Ludwig Koch. Item 54. €1,750 (US $1,943).

Next is "the greatest early monument of British botany." It is Thomas Johnson's update of John Gerard's The Herball or Generall Historie of Plantes... published 1633 (but with 1636 title page). It contains around 2,800 woodcuts of botanical specimens, colored in a contemporary hand. Someone went to a lot of work. You will find flowers, trees, gourds, root vegetables, herbs, spices, mushrooms and more. Some come from exotic lands such as America (remember, this was 1633). Herbals were not just scientific books, but were meant for use by apothecaries. Item 85. €45,000 (US $49,978).