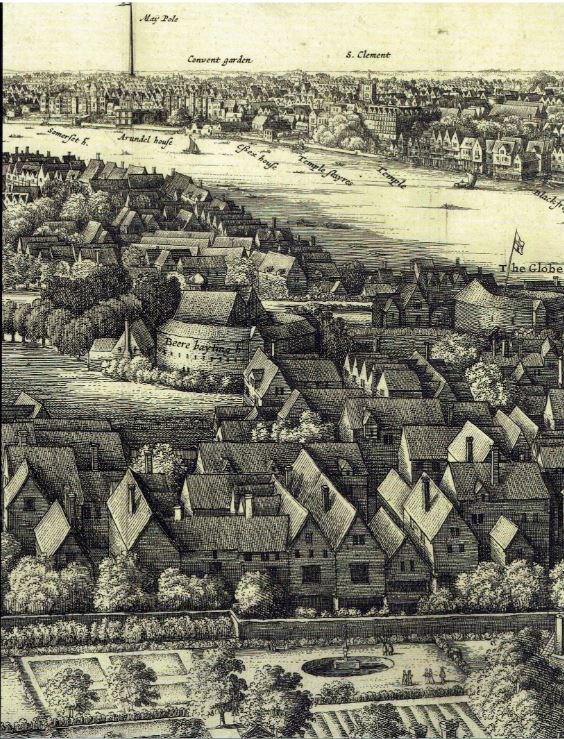 Daniel Crouch Rare Books has published their Catalogue VIII – Views of London. There are 150 illustrated London scenes offered. Some go back to the 16th century, others as recent as the 19th century. There are many overall views of the city, some large panoramas. The most common site for these views is from Southwark, looking over the Thames and into the city. Other views cover a small region or individual buildings. Others cover specific sights once seen in London, such as trains, bridges, crowds, even historic events. Three centuries of London are on display in these pages, as represented by some of the fine artists of the day. These are a few examples.

We begin with one of those views of London from Southwark. This one was created by the Venetian engraver and publisher Stefano Scolari, who lived during the first half of the 17th century. It was published in 1629, based on original artwork from 13 years earlier by Nicolas Visscher. Scolari had a habit of borrowing freely from others, yet the results are still spectacular. This view is a panorama, 15.25" x 81.5" in size. It looks out at pre-fire London from a bit east of London Bridge. The bridge is crammed with structures, as it was in the day, and also features a few heads (yes, real human heads, not plaster) on the bridge's gate. Authorities used to place the severed heads of criminals on London Bridge, sort of a deterrent to crime. I'm not sure it worked all that well since they kept coming up with new heads to put there. The title for this panorama is Londre Per illustri ac celeberrimo et eloquentissimo Oratori Domino Marono ab Ocha Domino meo. Item 1. Priced at £25,000 (euros, or approximately $30,597 U.S. dollars).

This next large view isn't pre-fire, but then again, it isn't post-fire either. It is during. Once again, it is from an Italian artist who has "borrowed" a bit from Nicolas Visscher. The title is Londra Incendio della Gran Citta di Londra...21 di Settembre 1666. It was published around 1674. The work was created by Galeazzo Gualdo Priorato, Count of Gomazzo, whom Crouch describes as "one of the last Renaissance men." The view, naturally, looks like pre-fire views except that Priorato has added smoke billowing from many of the buildings, including the old St. Paul's. He has also included a nice collection of heads on poles on the top the gate to London Bridge. Item 6. £3,000 (US $3,672).

While the fire necessitated rebuilding much of London, by a century later, it became necessary to rebuild the bridge, or at least, enable more traffic to flow. The numerous houses and other structures that crowded the bridge were to be torn down, and the center span removed to make for a single arch replacement. This would create more room for boats passing beneath as well as heavier traffic on the surface. A temporary wooden span was created, but in 1758, it succumbed to fire. Item 41 is William Herbert's An Exact View of London Bridge since the Conflagration of the Late Temporary Bridge. The bridge is shown with the remains of the temporary center span tilted into the river. Published in 1758. £250 (US $307).

This next item is described by Crouch as "the Port of London as it never was." By the end of the 18th century, it was clear that the ancient bridge, even as updated, was inadequate for the traffic it needed to handle. The House of Commons called for plans for improvements. This one was submitted by architect and designer George Dance the Younger, the city's surveyor. His plan was illustrated by painter and engraver William Daniell. Most plans called for higher arches to enable larger ships to pass beneath. Dance had a different idea. He proposed two draw bridges instead. This way, as ships passed beneath one bridge, requiring the bridge be closed and the draw raised, the other could continue to allow traffic to pass. His two bridge construction is depicted on this view. Dance's plan was rejected and so, of course, the scene here depicted never existed. Item 56. £3,000 (US $3,672).

The views of London from Southwark overlooked the city, but artists had long wondered what a view from the sky would be like. The development of ballooning in the late 19th century opened up that possibility. Still, to be able to draw a scene below from inside a moving balloon requires some special skills. Early ballooning was started by the French, so it is no surprise that this expert in balloon art would be French. Item 30 consists of two views of London from above by Jules Arnout. Arnout traveled around Europe with his balloon and drew various cities from above. At the end, he would add a small balloon in the distance to his city views. These two lithographs were published 1846-1848. Item 30. £1,200 (US $1,468).

This might have provided an even better view from above, if only it were to be. This view is more like George Dance's London Bridges. Item 69 is The Engraving of the First Carriage, the "Ariel"... The Ariel was a flying contraption, somewhat reminiscent of the look of the Wright Brothers' first airplane. It was the creation of William Henson and John Stringfellow, who with two others formed the Aerial Transit Company in 1842 (the year of this illustration). The company foresaw their plane being used to carry mail, goods, and passengers. The plane was something like a glider, but with the addition of a steam engine. Alas, the engine was too heavy and the machine could not fly. This view of the Ariel shows it flying over some factories. It never did. £1,150 (US $1,407). A second view of the Ariel flying over a beach north of London is also available. Item 70. £1,500 (US $1,835).