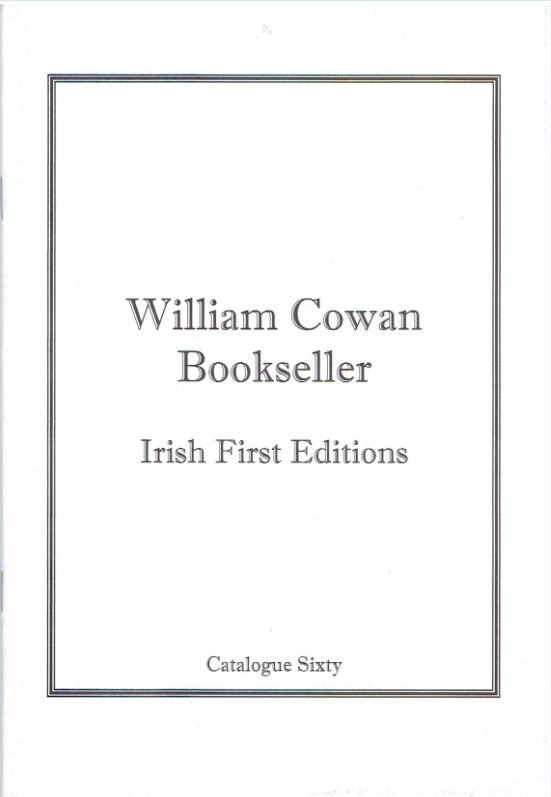 William Cowan Bookseller has released Catalogue Sixty of Irish First Editions. This is a catalogue filled with Irish poetry, and not of the ancient variety. The vast majority of works come from the late twentieth or the twenty-first century. I will admit that there are many contemporary Irish poets I don't know, though there are others here everyone knows. For those who collect recent Irish poets, there are 365 items offered in this catalogue. Even if you would rather read than collect it, that's okay too as a great many of these items are inexpensive enough to actually read! Double digits predominate, some very low double digits. Here are a few samples of the works to be found in this catalogue.

Michael Longley was born in Belfast in 1939 and is still very much alive and active today. A self-styled "sentimental disbeliever," he deals with numerous issues we all face, from war and peace to life and death. History and nature make their way into his poems as well. Item 194 is The Stairwell, a compilation of his poetry published in 2014. The first half of the collection covers a variety of subjects, but the second is, in effect, an elegy for his late twin brother. The Stairwell won the International Griffin Poetry Prize for 2015. This a Canadian prize with one annual award given to a Canadian poet and one to a foreign poet who writes in English. This copy is from a limited edition of 75 copies, signed and numbered by the author. Priced at £200 (British pounds, or approximately $243 in U. S. dollars).

Here is another book of poetry signed by Longley, but it is not his poetry alone. It is an anthology, 20th Century Irish Poems. However, it was Longley who selected the poems for this 2002 collection. Among the other contributors who have signed the book are Eilean Ni Chuilleanain, Bernard O'Donoghue, and Paul Muldoon. Item 3. £50 (US $61).

Speaking of Paul Muldoon, he too came from Northern Ireland. As a student at Queens University in Belfast, he became part of the circle of poets that included Longley and the needs-no-introduction poet Seamus Heaney. He has since moved to New York and served as Poetry Editor for the New Yorker. Along the way, Muldoon received a Pulitzer Prize for Poetry. Item 272 is One Thousand Things Worth Knowing, his twelfth collection of poetry, published in 2015. As a title like that might imply, it covers a wide variety of subjects, including his own coming to grips with the death of Heaney. £175 (US $213).

We will continue the segues to Seamus Heaney. This comes from early in his career. In 1963, he was still just 24 years old, a lecturer at St. Joseph's Teacher Training College in Belfast and striving to be a poet. His first work had been published only the previous year, his poems printed in local magazines. He would not have a book published for two more years. Item 118 is Volume 2; Number 2 of The Dubliner. In it, Heaney has contributed the poem Poor Man's Death. Heaney has signed the magazine by his contribution. £150 (US $182).

Here is another Irish poet who everyone recognizes. However, he is an exception to most in this catalogue, as he was writing in the late 19th century and the first four decades of the 20th, before many of the other poets in this collection were born. W. B. Yeats is one of the last century's best-known poets, whose accomplishments include a Nobel Prize for literature in 1923. It was a signal event, not just for Yeats but for the entire Irish nation, which had recently achieved its independence. Item 359 is The Wild Swans at Coole, Other Verses and a Play. This was the first compilation using the Swans title, published in 1917, which included the play. This is from a limited edition of 400 copies on hand-made Irish paper. £850 (US $1,034).

This next writer is not a typical poet, and his most notable award not a prize. Instead, he was knighted just this year. Item 244 is Lit Up Inside, by Sir George Ivan Morrison. Who? Okay, you know him better as simply Van Morrison. Morrison is a singer, his poetry put to music, a blues-tinged amalgam of Irish folk, hard rock, rhythm and blues, and jazz. In this case, rather than poetry being put to music, his poetry is extracted from his music. These are some of his favorite lyrics. Offered is one of 52 Deluxe editions of Lit Up Inside, signed by the author, specially bound, in a presentation box, along with an exclusive print of some handwritten lyrics signed and numbered by the author. G-L-O-R-I-O-U-S. £1,450 (US $1,763).

William Cowan Bookseller may be reached at 01631 710 500 or william.833cowan@btinternet.com or wcowanbooks@aol.com.