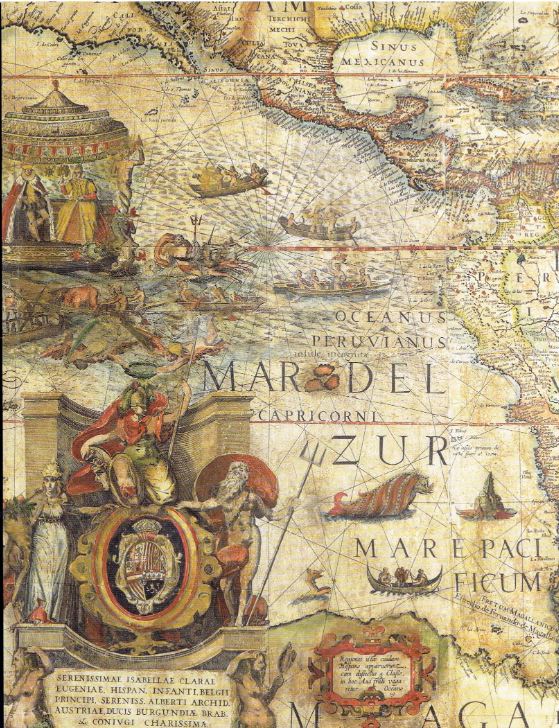 The latest catalogue from Daniel Crouch Rare Books will certainly catch your eye. Catalogues that are an inch thick will do that. Catalogue IX is a spectacular presentation. There are just 60 items, meaning the presentations are extraordinarily thorough, from the detailed descriptions to the numerous color illustrations accompanying each item. Naturally, a presentation of this scale means there will be no ordinary material here. This is for collectors on the highest level. They will not be disappointed.

We begin with one of the most important atlases ever published, particularly for those who live in the Americas. Item 1 is the Geographiae opus novissima of Martin Waldseemuller, published in 1513. It is generally regarded as the most important of the Ptolemaic atlases. Twenty-seven maps are traditional Ptolemaic maps, likely taken from the 1482 Ulm Ptolemy, but with the addition of 20 other maps, described as "new" or "modern." This was the Age of Discovery, and Waldseemuller had begun to incorporate the new discoveries now rapidly being brought back to Europe. This atlas is of great importance as it has the earliest obtainable maps of the "New World," portions of North and South America, with Isabella (Cuba) and Spagnola (Hispaniola) clearly delineated. Something of a mystery is the surprisingly accurate representation of Florida. It is not known how Waldseemuller determined this as there had been no known missions to Florida as of that time. This all appears on the first atlas map devoted to the New World, which Waldseemuller labels "Terra Incognita." This is fascinating as Waldseemuller had produced a similar map in 1507, today known in only one copy, that called this land America. Why did he change its name? It is speculated that by 1513, Waldseemuller had become aware that the land was discovered by Columbus, not Amerigo Vespucci. He refers to this as the "Admiral's Map," likely Columbus, though that could refer to Vespucci or others. If dropping the name of America was an attempt to correct a previous error, it did not work. That original name stuck and nothing is about to change it now. Priced at £600,000 (British pounds, or approximately $733,350 in U.S. dollars). This is not cheap, but nevertheless Brexit has made it considerably less expensive for American collectors than it was a few months ago.

The greatest atlases come from the late 16th through the 17th century, increasingly perfected by the great Dutch mapmakers Mercator, Ortelius, and Blaeu. These atlases were written in Latin and other continental languages, but rarely English. Here is an exception, Ortelius' Theatrum Orbis Terrarum. The Theatre of the Whole World: Set Forth by that Excellent Geographer Abraham Ortelius. The Theatrum part of the title was common to all editions, but not the part in English. First published in 1570, the English version was completed in 1606. When first released, it was not only the greatest atlas yet created, it was also the most expensive book ever published. The maps were actually printed in Antwerp as with other editions, but were then shipped to England where they were combined with the text printed in London. The Theatrum was ultimately published in 31 separate editions over 42 years. Item 11. £185,000 (US $226,250).

The greatest of the great would be the Atlas Major of Johannes Blaeu. The rivalry among Dutch mapmakers in the 17th century was fierce, as larger and better atlases were produced by the rivals. The prize goes to Blaeu. This atlas consists of nine volumes containing 600 maps and views, most double-page. The illustrations are hand-colored in a contemporary hand. Blaeu printed 1,550 copies of his atlas over a six year period from 1659-1665. It were published in five languages – Latin, French, Dutch, Spanish, and German. The largest number was 650 copies in Latin. Item 15 is a copy of the Dutch edition, officially Grooten Atlas, published 1662-1665. £650,000 (US $786,840).

This next item is harder to categorize. It isn't an atlas. Crouch describes it as a "bizarre encyclopaedia of subterranean geography." The title is Mundus Subterraneus. The author is Athanasius Kircher. Kircher visited Sicily in 1637-38 and observed the eruptions of a couple of volcanoes. He went on to visit Vesuvius, peered inside and heard "horrible bellows and roaring," and experienced "an inexpressible stink." He says, "I thought I beheld the habitation of Hell, wherein there seemed to be nothing besides the horrid phantasms of Devils." He correctly concluded there was massive fire inside of the earth with volcanoes as escape valves. He also realized there was much in the way of underground water as well. However, from there, Kircher's imagination ran wild. The book goes on to describe and illustrate the world below that he imagined. There are hidden lakes and rivers of fire and strange beings who inhabited the underworld. According to Merrill, "Major topics include gravity, the moon, the sun, eclipses, ocean currents, subterranean waters and fires, meteorology, rivers and lakes, hydraulics, minerals and fossils, subterranean giants, beasts and demons, poisons, metallurgy and mining, alchemy, the universal seed and the generation of insects, herbs, astrological medicine, distillation, and fireworks." Item 14. £225,000 (US $273,411).

The title of this next book may not sound exciting, but it is an account of perhaps the most important scientific voyage ever. It didn't seem so at the time. Item 32 is Narrative of the Surveying Voyages of his Majesty's Ships, Adventure and Beagle, Between the Years 1826 and 1836. The first voyage, that of the Adventure, was captained by Philip Parker King, the second, that of the Beagle, by Robert Fitzroy. Each has prepared accounts of their voyages, comprising the first two volumes. The fourth volume is an appendix. The important volume is the third, prepared by the mission's naturalist, Charles Darwin. Darwin describes the geology and natural history of the areas of South America they visited. He develops no astonishing new theories to explain what he saw in this volume. However, what he saw would lead to his ultimate explanation of why there were species with great similarities, yet adaptive differences located in different places. That he would finally announce two decades later, the theory of evolution. This account was published in 1839, and this is one of a small number of specially bound presentation copies, and is a very rare copy in that it is inscribed by Darwin. £220,000 (US $267,614).

Here is what is apparently the first American board game. What is it doing in a catalogue of maps and voyages? The answer is its subject: The Traveller's Tour Through the United States. The board is a map of the U.S., such as it was in 1822. The states are generally as we know them today east of the Mississippi, though Michigan is a territory, and north of Illinois it's still the Northwest Territory. West of the Mississippi there is Missouri and the Arkansas Territory, but that's about it. Below the map are 139 numbered cities and their populations. You would spin a totem numbered 1-8 and advance your player the requisite number of spaces, whereupon you would be required to name the city on which you landed, and in the more difficult version, its population. The starting point was Washington, the ending, #139, New Orleans. The game was the creation of Frederick and Roe Lockwood. Item 49. £30,000 (US $36,495).