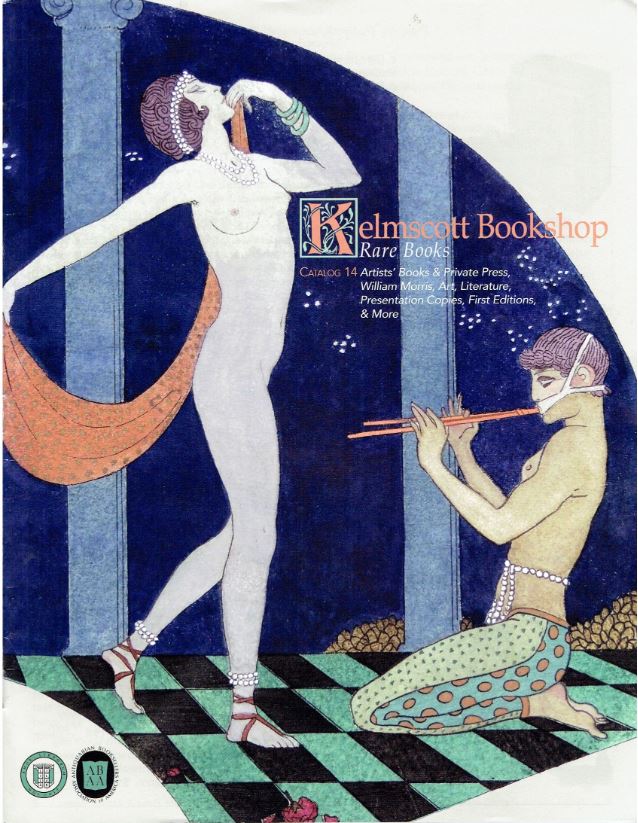 Books from the Kelmscott Bookshop.

The Kelmscott Bookshop Rare Books has issued their Catalogue 14: Artists' Books & Private Press, William Morris, Art, Literature, Presentation Copies, First Editions, & More. In other words, there is a wide variety of material offered. Through these items there is a common thread of artistic merit, appropriate for a bookshop named for William Morris' Kelmscott Press. Some are books that are simply works of art, for viewing more than reading. Others are more textual, but whose illustrations, bindings, and such make them works of art. In some, the text is the art, the art being in the words rather than the visuals, such as poetry, music, and literature. And then, some items aren't books at all, but drawings, photographs, caricatures, and fashion designs. There is a lot to be found here. These are a few samples.

We begin with a work from one of the great American writers of the 19th century. He was undoubtedly a literary genius, but few will call this one of his greatest works. Well, perhaps the great 19th century educator, Horace Mann, would disagree, in a sarcastic way. Nathaniel Hawthorne had achieved notable success in the two years prior to 1852, having published The Scarlet Letter and The House of the Seven Gables. This one was not meant to be any such achievement. It was a gift to an old friend, one that soon would be repaid. Item 85 is The Life of Franklin Pierce. Pierce and Hawthorne had gone to college together and remained good friends. In 1852, Pierce was running for President, and Hawthorne responded by writing a biography of him. It was, naturally enough, very favorable to Pierce. He described Pierce, a classic 'northern man with southern principles,' as "a man of peaceful pursuits." Horace Mann reportedly said, "If he makes out Pierce to be a great man or a brave man, it will be the greatest work of fiction he ever wrote." Mann was, of course, right about Pierce, one of the worst presidents in American history. Hawthorne deserves his own scarlet letter for writing this one. However, he instead received an appointment as consul to Liverpool, a very prestigious position at the time, where he remained until the end of Pierce's term in office in 1857. Priced at $250.

Here is one of those books that is not really meant to be read. Not that it couldn't be. The book is Charles Dickens' Bleak House. First published the same year Hawthorne was penning his paean to Franklin Pierce, it is way more highly regarded than Hawthorne's effort. Bleak House is the story of interminably long legal proceedings, the fictional case of Jarndyce v. Jarndyce, endless litigation concerning the terms of a will that affects all of the book's characters. However, this 2014 edition features more of the artistry of Stanley Strauss than of Dickens. The "book" consists of three items. The first is a 5 ½ inch thick, 736-page printing of the entire text of the book, bound only with binding straps. It is as large and unwieldy as the court case itself. The second piece is called "Jarndyce v Jarndyce," with each of the 58 characters names handwritten on scraps of torn paper, bound accordion style. The third item is titled "Last Will and Testament," and it consists of innumerable scraps of torn printed paper, conveying the futility of the litigation. They are sealed in a clear acrylic box. One can only wonder how Hawthorne would have reacted to this unusual treatment of his work. Item 2. $1,400.

Next comes the simply titled Poems, by Dante Gabriel Rossetti, published in 1870. Rosetti was an artist and a poet, one of the founders of the Pre-Raphaelites, who would greatly influence William Morris and his circle. However, the story behind these poems seems better suited to a volume by Poe. Around 1850, Rossetti began painting the model Elizabeth Siddel, an ordinary but beautiful woman who in time would become an artist and poet herself. The two became enchanted, then deeply in love with each other. Rossetti painted her constantly. They became engaged, yet Rossetti managed to keep putting off the marriage, not being above affairs on the side. Siddel's health deteriorated, and she became increasingly addicted to laudenum, a painkiller containing morphine. However, they married anyway in 1860, though Siddel was quite ill. She died two years later, and a devastated Rossetti buried the only copy of some of his erotic poems with her body. He should have kept a second. Eight years later, now determined to publish these poems, Rossetti had her body exhumed and the poems removed. This copy was published in a very small run. The limitation notice says there were 25 copies printed on large paper for private circulation, but his brother's bibliography of Rossetti's works claims there were only 18. Item 52. $2,400.

Here is a book that makes 18 copies seem like a large print run. The title is Florentine Pages by Tatiana Shukhin. Shukhin was born in Russia and graduated from the Moscow University of Printing. However, she later picked up degrees in the U.S. and currently works from Maryland. This 2013 book is designed to take its readers on a trip through Florence by means of a journey through the pages of the book. The text is in narrow passages that lead to various sights in the city. Towers, cathedrals, fountains, and various buildings are seen in bright colors as one makes their way through the book's pages. Evening sights are illuminated in yellow by street lights. Each of the copies has a slightly different binding, all seven of them. Item 39 is number 7 of 7. $900.

This is sort of a specimen book for England's Incline Press. This private press was founded in 1993 and operates to this day. It comes with a title of Forty Sheets to the Wind. It consists of 40 sample broadsides and other sheets printed by the press which demonstrate their typefaces and printing skills. There were 150 sets published in 1999, this being the halfway point – number 75. Item 16. $300.