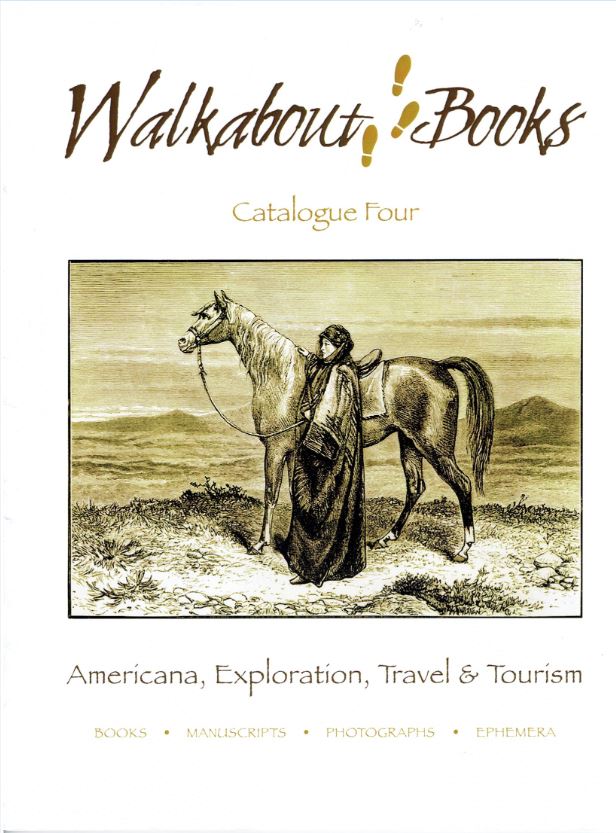 The fourth catalogue from Walkabout Books.

Walkabout Books has published their Catalogue Four of Americana, Exploration, Travel & Tourism. The catalogue is divided into specific subjects – General Americana, Western Americana, and World Travel & Exploration (and Related Subjects). The first and third of those topics are rather broad, while Western Americana includes much targeted material, such as immigrant and settler guides to specific states and places. Almost all of the material dates from the 19th or early 20th century. Only a few items cross the fourth digit in terms of price, and some drop down to just two digits. Here are a few samples of what you will find in this new Walkabout catalogue.

We begin with an account of an epic journey of sorts: Coast to Coast: The only man to drive a single horse across the continent, starting at Catalina Island, California, and finishing at Coney Island, New York. The author/sojourner was George D. Brown, and he made his journey from May 1, 1917, to January 14, 1918. His account was published in 1923. We will have to take his word about being the only man to drive a single horse across the country as I have no idea how to determine whether anyone else did. The book is presented as a day-to-day journal, and Brown gives his impressions of the 18 states he visited along the way. Among the reasons Brown listed for his undertaking was to be the first to accomplish this feat, to learn about the working conditions and hospitality in the states he visited, and, being a Californian, "to get away from a state where it is almost impossible for a working man to get enough money together to pay his fare out of the state." Some things never change. Item 40. Priced at $150.

I don't know whether this horse could have withstood the wear of a cross-country journey, but he certainly would have provided Brown with greater companionship. Item 2 is The Story of Captain, The Horse with the Human Brain. The author was George Wharton James, a legitimate nature writer who was enormously impressed by Captain when he saw him perform at the Panama-Pacific Exposition in San Francisco in 1915. Captain could add, subtract, and count, tapping his feet to give the answers. He played "Nearer my God to Thee" on the chimes, though we are unsure whether he fully understood the meaning of this hymn. Captain could also match colors and operate a cash register, a helpful skill for one who works at carnivals. Captain was owned by another Captain, Captain Walter A. Sigsbee. The two Captains made their way from Wisconsin, where Sigsbee and his horse performed at fairs. After conducting a "scientific investigation," James (not a scientist) concluded there was no trickery involved, though he thought the horse might be picking up unintentional cues from his trainer. Sounds like James was suckered in. He did come out of his experience with one reasonable conclusion, that we still have much to learn about animal intelligence, even if some of us remain skeptical that Captain was quite as smart as he appeared. $100.

Sigsbee's show was evidently good fun through harmless deception, but this fraud is not so pleasant. Item 19 is an 1850 pamphlet sold at shows: Memoir of an Eventful Expedition in Central America; resulting in...the possession of two remarkable Aztec Children, Descendants and Specimens of the Ancient Aztec Founders of the Ruined Temples of that Country, described by John L. Stevens, Esq., and other Travellers. Don't believe a word of it. The author was "Pedro Velasquez," but his name was as fake as the supposed Aztec children. They were not the last survivors of ancient Aztec civilization found in some jungle temple. They were two Salvadoran children who suffered from microcephaly, a birth defect in which the head is abnormally small compared to the rest of the body. This made them ideal for gawkers. The show was promoted at the time by a Mr. Morris, though eventually the children would end up in P. T. Barnum's show. They would be presented to President Millard Fillmore and Queen Victoria. Their eventual fate is unknown. As for John L. Stevens, he was a legitimate American explorer who had nothing to do with this fraud. $250.

Next up we have a truly dangerous journey. Richard Burton was England's most notable explorer of the 19th century, and some of his expeditions were very dangerous because he was venturing off into unknown places far from European civilization. However, this journey was dangerous because he was not at all welcome by his hosts. Item 86 is a Personal Narrative of a Pilgrimage to El-Medinah and Meccah, published 1855-56. Burton was a Christian Englishman, but only Moslems are allowed to make the Hajj to the holy cities. Had he been caught, he would not have come out alive. Burton spent many years learning about Islam and the Arabic language. He also had to learn the customs of those he pretended to be. He first spent some time in Egypt, making sure he could successfully pull off his impersonation before traveling to Mecca in 1853. The ruse worked and Burton lived to come home and write about his experiences. $8,500.

Item 73 is a promotional brochure for Western North Dakota: Being a Description of a Land of Great Promise and Opportunities it Holds for Homeseekers. This is a 1911 revised edition, published by the Northern Pacific Railway, which had recently completed a line from Mandan to Mott in the western part of the state. The railroad praises the natural resources and agricultural opportunities of the land. Naturally, they hoped settlers would come and ship goods east via their railway. The settlers never came in droves, and for another century western North Dakota was at best sparsely populated. However, in the early 1900's, the railway could hardly have imagined just how great the "promise and opportunities" would be a century later when technology discovered how to release the vast quantities of oil in the rocks of western North Dakota. $150.