A Miscellany from The Brick Row Bookshop 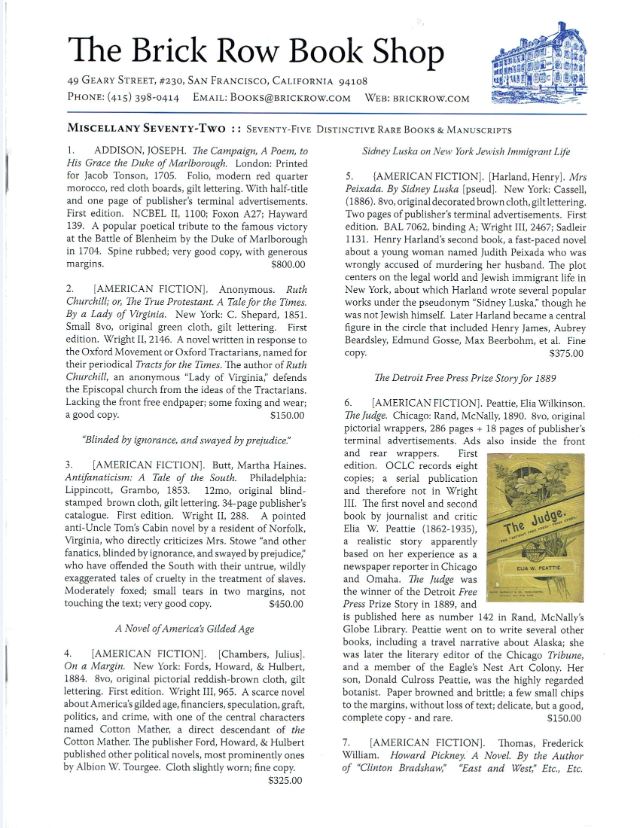 The Brick Row Bookshop has issued Miscellany Seventy-Two: Seventy-Five Distinctive Rare Books & Manuscripts. It contains a mix of fact, fiction, poetry, manuscripts, photographs, and other things. In other words, it is indescribable. Therefore, we will limit ourselves to describing a few samples of what is to be found.

After the publication and great success of Uncle Tom's Cabin, a few southern writers felt the need to set the North straight on what slavery was really like. It was a benevolent, kindly institution, as anyone who ever visited the South could surely attest. One such writer was Martha Haines Butt, who cleared the air on this point in her 1853 reply novel, Antifanatiscism, A Tale of the South. She claimed people like Mrs. Stowe were "blinded by ignorance, and swayed by prejudice." She says no, the slaves are "not mangled or cruelly tortured, as she represents in her work." Rather, Miss Butt says, "No, no! So far from this, he would give him his freedom if he desired it, and something to begin the world with. But so attached does such a slave become to such an owner that he would not leave him on any consideration." What a butthead. Item 3. Priced at $450.

Here comes some exciting reading. Item 13 is a manuscript notebook of 77 sermons written by Rev. William Young between 1835-1848. Young was a circuit riding Methodist preacher in Virginia and Ohio at the time. Each sermon is signed by Young, dated, and listed as to place it was delivered. Now, if you are a preacher struggling to come up with new material, this is a fantastic opportunity. There is no one left who heard them before. The subject matter is still timely, the Bible not having changed one iota since 1835, though perhaps most ministers emphasize different parts today. Certainly we can say a lot of work went into creating these 77 handwritten sermons. $1,800.

Item 19 is a small group of photographs, manuscripts, and printed items from the collection of Arthur Dunn. Samuel Clemens/Mark Twain and family paid the Dunns a visit at their home in Willesden, outside of London, in 1901. Twain spent a year in England at the turn of the century. Dunn was a photographer, and this collection includes numerous newspaper clippings concerning his work, and manuscripts which include three letters from Twain. However, it is the photographs of the Twain family visit that are most significant. There are photographic portraits of Twain along with those of his family. One is specifically identified in the margin as "Mark Twain and Family." $9,000.

Speaking of Monsieur Twain, item 17 is Les Aventures de Tom Sawyer... It tells us tales of Tom floating his raft down the Seine River. Well, not quite, but this is the first French edition of Twain's American classic, Tom Sawyer, published in 1884. It contains 68 illustrations you probably have not seen before since they were prepared for this edition by French artist Achille Joseph Louis Sirouy. $3,250.

Or how about this one? Item 55 is Herman Melville's classic Moby Dick o la Balena. I don't know Italian, but I'll guess "o" means "or," "la" mean "the," and "balena" means "whale." It took nine years for a French edition to be printed of Tom Sawyer, but the wait for Italian readers to get Moby Dick was much longer. The first Italian edition was published in 1932, 81 years after the first edition. $2,250.

We conclude with an item appropriate for this electoral season in America. Item 67 is Observations Upon a Late Libel, Called a Letter from a Person of Quality to his Friend, Concerning the Kings Declaration. The author was George Savile, the First Marques of Halifax. This pamphlet was his response in 1681 to a previous attack on King Charles II by someone calling himself "a Person of Quality." Savile evidently thought his quality was of the low sort. It was Charles II who took the throne in the Restoration of 1660, after the death of Cromwell. However, by 1681, he found himself ensnared in the battles between Protestants and Catholics, his moderate views on Catholics leading to opposition, and in turn his dissolution of Parliament several times. The Person of Quality had railed against Charles, to which Savile offered his response. Along the way, Savile notes, "We live in an age where ill humor and Malice to the Government do so prevail..." Some things never change. $925.