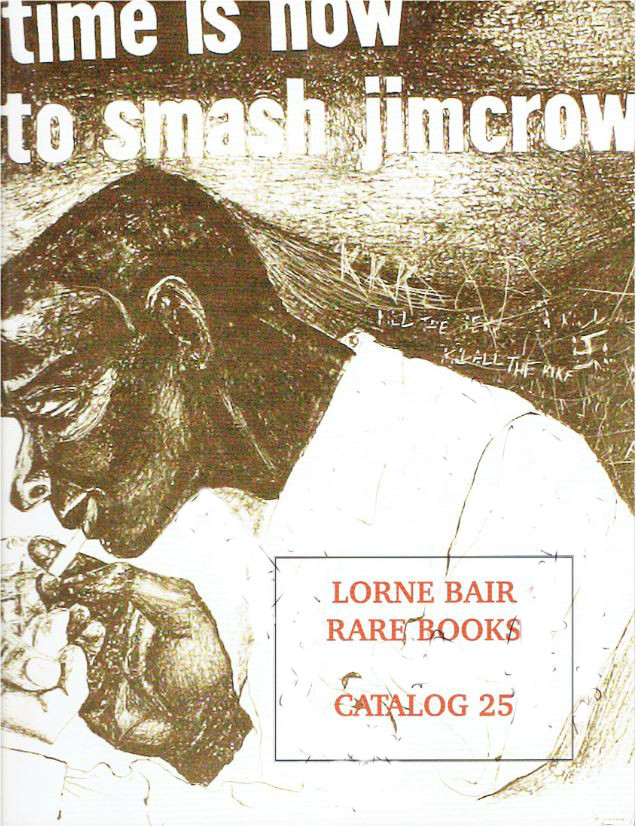 Lorne Bair Rare Books has issued their Catalog 25. Bair describes this as a special one, 51 items selected mostly from recently acquired inventory that are either unique or very rare. Lorne Bair focuses on radical literature, overwhelmingly from the left or far left, with a few from the far right interspersed for "balance." You will find some extremes here, but also those of a less radical nature, Martin Luther King, rather than Mao. This is American material, and Americans have always vacillated between their ideals and their prejudices. When the latter prevailed, there were those on the outside ready to remind us, even if at times they could be extreme. Here are a few of the fifty-one.

We begin with an item that is not a radical reaction to injustice, but simply a guide for surviving it. Item 18 is the 1959 edition of The Negro Travelers' Green Book. It was published the preceding year by Victor H. Green. The Green Book was published from 1936-1966, and it was a guide for African-American travelers, informing them where they could stay and where they could eat. In the Jim Crow days, blacks could travel around the country, but many if not most businesses were not welcoming when they stopped. Particularly in the South, but elsewhere as well, black travelers could not tell which establishments would accept their business. In some areas, it was mostly limited to those run by black people for black people. The Green Book provided an essential guide to where black travelers could find the essential services necessary to make their journey. Priced at $6,500.

Comics were invented to express humor, but in time, people realized they could be employed to convey serious messages to readers, particularly younger ones. We all remember the Classic Comics, which converted classic literature into comic books. They were great for writing book reports without having to actually read the book. Alfred Hassler came up with the idea that a comic would be a good way to instruct young people about the cause and work of Martin Luther King, particularly the Montgomery Bus Boycott which integrated the buses of Montgomery, Alabama. Item 23 is the output of that idea, published in 1957-58: Martin Luther King and the Montgomery Story. While there was some controversy over depicting such a serious topic in this format, the comic proved to be a popular vehicle, eventually being translated and distributed to South America, Europe, Africa, and the Middle East, along with the U. S. A. Oddly, while the writer is known, the illustrator has never been definitively identified. At the time it was published, it cost 10 cents, and while the price is much higher today, considering that Superman and Batman comics have sold for millions of dollars, this important true story in a comic is a bargain at $750.

The previous items show some unpleasant stains in our history, but this one takes it to a different level. However, the victim is not whom you might expect. Postcards usually present us with scenic views of their community, but not this one, a picture taken in the woods outside of Marietta, Georgia. It was taken in 1915. It shows a man dangling from a rope around his neck, his hands tied behind his back. A group of men look on. Here is what you may not expect. The man is not black. He is Leo Frank, a Jew from the town. Frank was accused of killing a 13-year-old girl who worked in his pencil factory. It was a dubious trial, marked with antisemitism. A janitor who testified against Frank is believed by many to have been the actual killer. Nonetheless, Frank was convicted and sentenced to death. It led to outrage, books, and magazine articles. The Governor was concerned by the outcome, and while not overturning the verdict, commuted the sentence to life. It didn't matter. After the commutation, a group of "prominent" men from the community broke into the prison, tied up the warden, and drove Frank to the woods near the girl's house and lynched him. The group included a former Georgia governor. It is said that half of Georgia's Jewish population left the state as a result. Item 13 is one of the souvenir postcards, which sold for 25 cents in 1915. $2,000.

Nicholas Klein understood that the best time to reach people, if you want them to support your cause for life, is when they are children. In 1908, he published this targeted work, The Socialist Primer: A Book of First Lessons for the Little Ones in Words of One Syllable. Indeed, he keeps those words short. No mentions of dialectical materialism here. Just simple words like "free" and "slave." For example, one lesson depicts a factory with a child laborer. Klein asks, "Who works in the shop? Where should the child be? Do you like the school? The child is in the shop to make the Fat Man rich." The smiling "fat man" is pictured in front of the factory, smoke billowing from its chimneys. But, there is a solution – the ballot box. When men (remember this is 1908) "vote right," "Then we will own the shop. Then we will own the mill. Then we will own the land. Will you vote when your [sic] big? Then the Fat Man will go to work." And well he should! Item 28. $750.

Next up is a creepy item. It is a bound collection of mimeographed field reports and photographs from the Sociological Department of the Ford Motor Company in 1915. The Sociological Department was designed to improve the lives of its workers, at least in accordance with Henry Ford's vision. It was all-encompassing. Ford wanted to encourage workers to live in clean and neat homes, save money, make sure their children went to school. For immigrant workers, and there were many, there were free classes that instructed not only how to speak English, but how to act like Americans. Workers' wives, aka housekeepers, were trained in the necessary skills. However, Ford's methods were intrusive to say the least. They would make unannounced visits to workers' homes, check on school attendance, check on transactions in workers' bank accounts to make sure they were saving money. This was social engineering to the extreme, and Henry Ford was determined to mold his employees into cookie cutter workers, fitting the ideals of this highly bigoted man. The program, started in 1913, was discontinued around 1920. Item 11. $2,000.