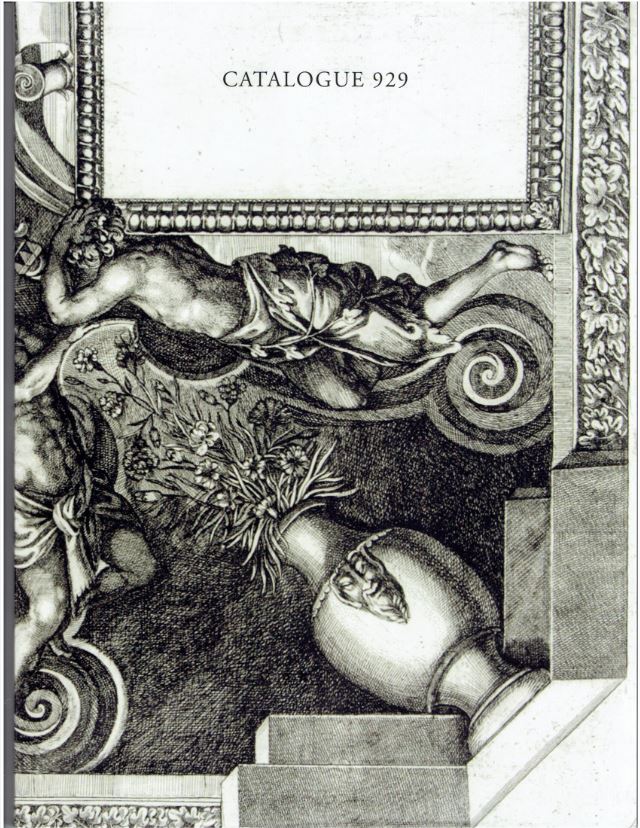 Erasmushaus has released their Catalogue 929 Rare Books. Along with being rare, most of these books can equally be described as antiquarian. While a few are as late as the 20th century, all but five of the 61 items date to the early 19th century or earlier. A few fit the parameters of incunabula, with the oldest being a German bible from 1477. With Erasmushaus being a Swiss bookseller, it is not surprising that most books are of continental European origin, notably German and French. Of course, going back to the 15th and early 16th century, there weren't many books being printed anywhere but continental Europe. Here are a few samples from this latest Erasmushaus catalogue.

Here is one of those incunables, and one of the most important books of the 15th century. The title is Liber Chronicarum, though it is more familiarly known as the Nuremberg Chronicle. It is so named for its place of publication, and the fact that author Hartman Schedel wanted to make sure his hometown got its due on the world stage. However, it is about much more than Nuremberg. It was the first comprehensive history of the world, covering time from the Creation up to the present, which was then 1493. This was a seriously ambitious project, even going beyond the present to predict the future. What is missing is any discussion of the New World. Columbus returned to Spain shortly before the book was published, but Schedel was not yet aware of his discoveries. Along with its historical text, which at times might be fanciful in attempting to reach all the way back to Creation, it contains 1,809 woodcut illustrations. Schedel cheated a bit using many multiple times. There were 645 blocks. The book was published by Anton Koberger, and some of the woodcuts were undoubtedly produced by his godson, a young Albrecht Durer, who worked in the shop that produced the woodcuts. Item 4. Priced at CHF 160,000 (Swiss Francs, or approximately $162,830 in U. S. dollars).

Albrecht Durer would be much older by the time this book was published in 1525. Durer is best known for his art, but he was also one of the most notable mathematicians of his time. He combined the two, using mathematical formulas for creating accurate representations of objects in space. Along with instructions for artists, he provides a guide based on mathematical proportions for architects, builders and the like. Item 9 is Durer's Underweysung der Messung... his four books on measurement. It is bound together with Eliche underricht... a 1527 treatise on fortifications. CHF 68,000 (US $69,229).

Next we have an early collection of fables with an unusual publishing history. Item 17 is Spiegel der Naturlichen... by Daniel Hotzmann, published in 1572. Holtzmann, who Erasmushaus describes as a "fur trader," was little more than a literal translator of these fables by the Bishop of Cyrillus. He did not pretend to be more in his self-deprecating preface. The fables were intended to teach children right from wrong, and Christian values. Holtzmann's publishing history of this book is unusual. He issued it nine times between 1571-1574, each using a different title and dedication. Evidently, the body copy was printed at once and then inserted into each of the separate issues. Each was obviously published in small numbers, making them very rare today. CHF 9,800 (US $9,920).

Item 5 is the masterwork of the very erudite scholar and government official Anicius Manlius Torquatus Severinus Boethius. You may call him "Boethius," as does everyone else. The title is The Philosophico Consaltu, the Consolation of Philosophy. The book is very old, published in 1501, but it was written almost a millennium before then. He died in 524, with a little help from his friends, at the age of 44. Boethius wrote about various topics, including math and music, but his views on philosophy were his most notable. The publication of this book is testimony to his lasting influence on Christian thought a thousand years after he died. The book is an imagined dialogue between himself and philosophy, in the image of a woman. Boethius argued that despite the troubles in the world, all of this is secondary to divine providence. Boethius was an important official and advisor to King Theodoric in Rome in the days after the fall of the Roman Empire. However, the suspicious King feared that Boethius was sympathetic to his rivals. He ordered Boethius imprisoned. It was during his imprisonment that Boethius wrote this book. Unfortunately, his imprisonment did not end with freedom, but with execution. Still, his reputation remained intact long term, with Boethius being recognized as a saint in 1883. This Strasburg 1501 edition includes commentary from Thomas Aquinas. It contains 78 woodcuts from 60 blocks produced by the studio of printer Johann Gruninger. CHF 19,000 (US $19,218).

Item 10 is Martin Luther's response to a text by the contemporary Catholic theologian Erasmus (in whose house bookseller Erasmushaus resides). Erasmus was a reformer, but unwilling to split from the church as did Luther. Erasmus had written a text in response to Luther's views on salvation. The question had been whether people could contribute to their own salvation or whether it was determined by predestination. Erasmus wished to avoid speculative subjects like predestination, while basing salvation overwhelmingly on grace, but leaving a little room for man's moral behavior. Luther was having none of it, demanding answers to questions Erasmus was willing to leave unclear. Luther's response is contained in this book published in 1525, De Servo Arbitrio ad D. Erasmum Roterdamum. CHF 24,000 (US $24,284).