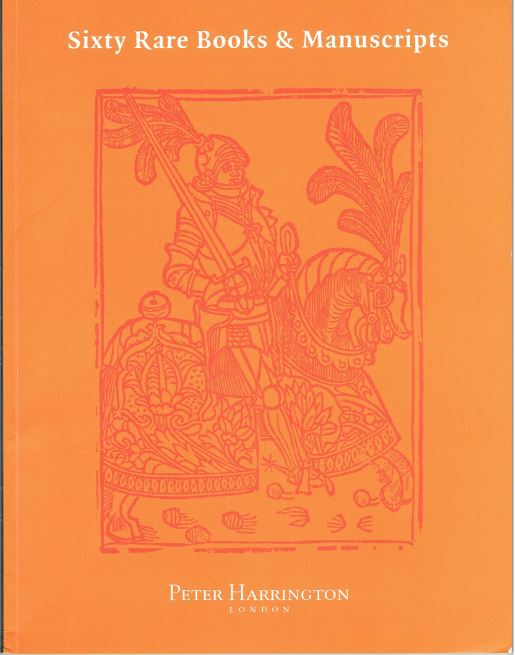 Peter Harrington has published a catalogue of Sixty Rare Books & Manuscripts. It contains... well, just what the title says. Harrington generally offers a wide selection of material. Rather than subject specific, the items are tied together by importance and condition. This is all very highly collectible material at the top level. Here are a few examples.

We begin with a book from a very accomplished Italian mathematician/scientist of 16th century. His last name will be familiar, though not because Vincenzo Galilei is well known. It is because his son, Galileo, is remembered as one of the most important scientists to ever walk the earth. Vincenzo was also deeply involved in the study of physics, but his field was acoustics rather than astronomy. Vincenzo was a lutist and composer, but more notable is his study of the physics of sound. He conducted detailed studies of pitch, using mathematical formulas to determine what lengths of strings and tension applied produced sounds at another octave. It is likely that Vincenzo's focus on practical applications of mathematical formulas to physical events inspired his son's interest in real world use of these tools, rather than as more of an academic pursuit. This would cause Galileo some problems with the Church later in his life, but those arose because of the advancements he made in scientific knowledge. Item 3 is Vincenzo Galilei's 1581 book, Dialogo...della musica antica, et della moderna. Priced at £22,500 (British pounds, or approximately $28,895 U.S. dollars).

Black Beauty has long been a favorite of young people, girls in particular, though that was not the author's original intention. Anna Sewell lived a difficult life. Injured in an accident while in her teens, she could never walk much the rest of her life. As she became older, Anna was bedridden, cared for by her mother. Her inability to walk led to her taking many carriage rides, which in turn led to her love of horses. She was upset by how many were abused and overburdened in the 19th century and wrote her book in an attempt to generate more sympathy for them. Black Beauty was her first and only book, published in 1877, when she was 57 years old. She died five months later. Item 38 is a presentation first edition from Anna "For dearest cousin Emma," dated Christmas 1877. It comes with three letters to Emma Curtis. The first came shortly after the book was sent. The second is a response to what were evidently positive comments Anna received from her cousin. Emma was also an author, so her approval was particularly gratifying to Anna. "I am delighted that you like my book," she writes. The third is terribly sad. Written by Grace Sewell on April 25, 1878, the day Anna died, it says, "Dear Anna particularly requested her affectionate love to be sent to you – April 25, 1878." £50,000 (US $64,289).

Next up is a book, actually two, fit for a king. Item 6 is a 1634 edition of Samuel Daniel's The Collection of the History of England (first published in 1612) bound together with John Trussell's A Continuation of the Collection, a first edition from 1636. It bears the arms of the then Price of Wales, the future King Charles II of England. Perhaps it was from learning his nation's history through these books that Charles II avoided the terrible mistakes of his father, Charles I. Dad found himself in the midst of an uprising in the 1640's he could not control. Oliver Cromwell's army defeated him, Charles I being executed in 1649. With the defeat of his father, Charles II officially became King, but he wasn't waiting around to assume the throne. He hightailed it off to Europe, where he waited out the remainder of Cromwell's de facto rule. After the latter's death, England, tired of Cromwell's puritan rule, invited Charles II back home, where he reigned until his death 25 years later. £15,000 (US $19,285).

Percy Bysshe Shelley is noted for his poetry, produced in a few short years before drowning in a storm just short of his 30th birthday. However, before anyone knew his poetry, he visited Ireland, where he supported the cause of Catholic Emancipation and repeal of the Act of Union, which placed Ireland under English control, but did not permit Catholics to serve in Parliament. In 1812, Shelley published this pamphlet "to awaken in the minds of the Irish poor, a knowledge of their real state." He priced it at just 5 pence so even the poor could afford it, though it appears he also gave many copies away. Not surprisingly, it didn't make Shelley particularly popular with English authorities, but he was not a notable figure at the time. Item 21 is Shelley's An Address to the Irish People. £100,000 (US $128,517).

Next up is a large collection of books from the personal library of Ernest Hemingway. It contains some of his own books, books given him by other authors, and books given him by family members, some when he was still quite young. These books from his childhood were often Christmas or birthday presents. Harrington notes that the inscriptions show that Hemingway was inquisitive as a youth, and well-loved by his family. Harrington also says that his lengthy annotations and doodles reveal Hemingway to be engaged "with moral issues as well as having a short attention span." The books were stored for many years in a saloon owned by a friend, not ideal conditions, so they are in less than the normal pristine condition the bookseller offers, but this is a one of a kind, so you won't find such a collection in better condition. Thirty-nine books in all. £45,000 (US $57,810).