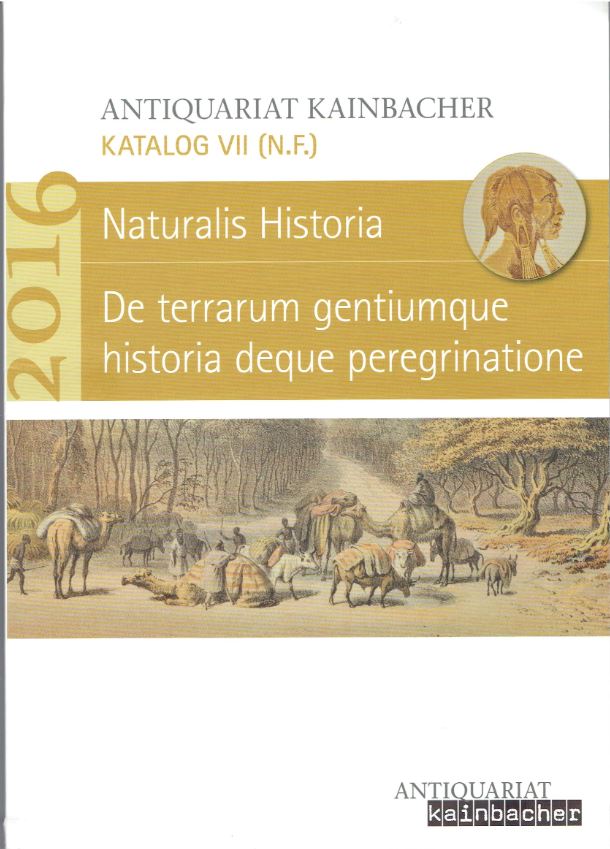 This month we received out first catalogue from Antiquariat Kainbacher of Baden, Austria. This is their Katalog VII. As you might suspect, the catalogue is written in German, so some familiarity with the language would be very helpful. The books themselves are mostly in German, but not entirely so. English and French make occasional appearances.

The catalogue is divided into two sections. The shorter first section is Naturalis Historia, or Natural History, the longer second section covers De terrarum gentiumque historia deque peregrinatione, or nations of the world, history and travel. Here are a few of the books we found in this catalogue.

We begin with an important and pioneering study of meteorites. Peter Simon Pallas was a German professor called on by Catherine the Great to teach at the St. Petersburg Academy of Sciences. He traveled around the country collecting specimens of natural history. One of those he found was a huge meteorite. No one was certain of their origin at the time, the predominant belief being they were volcanic in origin. Enter Ernst Chladni. He had a different theory. He described it in this 1794 book, Ueber den Ursprung der von Pallas gefundenen und anderer ihr ähnlicher Eisenmassen... (On the origin of the iron masses found by Pallas and others similar to it...). Chladni, whose primary expertise was in the field of acoustics and musical instruments, believed meteorites came from outer space. The theory was extremely controversial at the time and subjected Chladni to his share of ridicule. However, after a meteorite was observed crashing to earth in England, and some others similarly in France, and they were then examined, scientists came to realize that Chladni correctly understood their origin. Priced at €25,000 (euros, or approximately $28,065 in U.S. dollars).

This next book presents the most important compendium of early voyages ever assembled. Its collection of early American voyages is second in importance only to the Columbus letter, but it also presents the account of Vasco da Gama's trip to India, of comparable significance to Asian discovery. The compiler was Fracanzano da Montalboddo, an Italian scholar from Montalboddo (now known as Ostra), about whom little is known. His account was first published in Italian in 1507. This is the first German edition, from 1508, titled Newe vnbekanthe landte Und ein newe weldte in kurtz verganger zeythe erfunden (new land and new world...). Among the voyages herein described are the first three of Columbus, the third of Vespucci, da Gama's exploration of Africa, Arabia, and India, Cabral's discoveries in South America, the earliest explorations of the west African coast dating back to the 1450's and 1460's, a voyage to Greenland, and others. Da Gama's travels, which within a few decades would lead to European domination of lands from Arabia to India, were first reported in this collection of voyages. Interestingly, Fracanzano refers to his countryman and contemporary, Amerigo Vespucci, as Alberto. If he was correct, Americans may need to change the name of their country for the sake of historical accuracy. €250,000 (US $280,646).

Richard Burton was England's most notable explorer of the 19th century. His most important discoveries were in the Africa and the Middle East, including a rare visit by a westerner to Mecca (that was illegal – he had to disguise himself as an Pakistani Muslim). He did journey to America on one occasion. In the early 1860's, he was named British consul to the island of Fernando Po, off the west coast of Africa (today part of Equatorial Guinea). It was not a prestigious assignment and Burton used every chance he could to visit the mainland for more exploring. He wrote about such an adventure a decade later, Two Trips to Gorilla Land and the Cataracts of the Congo, published in 1876. It contains information about his trips and the customs of the natives, as seen through not entirely objective British eyes. However, Burton failed in his major goal, to capture a gorilla. He was fascinated by the animals, but never saw one outside of a cage. €6,000 (US $6,737).

Here is a British explorer from the prior century. Well, he wasn't so much an explorer, though he did circumnavigate the globe. He was more a pirate, though he was officially an admiral in the British Navy. George Anson was sent to harass and steal from Spanish shipping out of South America in 1740. This was the time of the infamous War of Jenkins' Ear, and England intended to make Spain pay big time for snipping off Mr. Jenkins' ear. Anson set out for South America with eight ships. By the time he made it through the Straits of Magellan, he was down to two, the others either having sunk or been turned back by winds. One more had to be abandoned along the west coast of the continent. Meanwhile, Anson had very little to show for his efforts and the loss of lives and ships. His mission would have been deemed a terrible failure were it not for his capturing a Spanish ship near Manila, which turned out to be loaded with treasure. Anson returned home a hero and a rich man. Never mind that only 188 of the 1,854 men he took made it home alive. Collateral damage. Taking so much treasure from the Spanish was sufficient to make him a hero and an admiral. This is the German translation of Anson's account, published in 1749, a year after the first edition: Des Herrn Admirals, Lord Ansons Reise um die Welt... €2,900 (US $3,257).