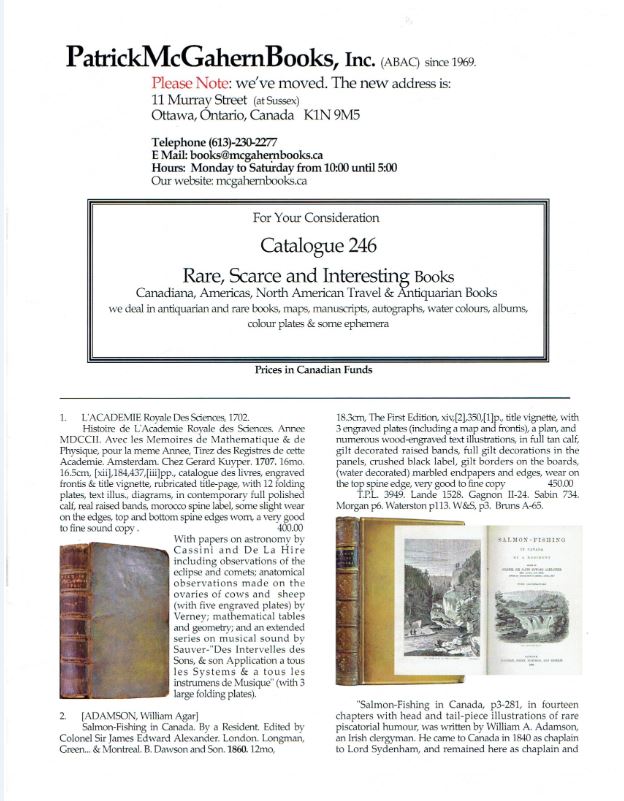 Patrick McGahern Books recently issued a new catalogue of Rare, Scarce and Interesting Books. Canadiana, Americas, North American Travel & Antiquarian Books. That places most books from or about North America, with a few exceptions, mostly from England. With only a couple of outliers, the items are in the English language. Here are a few.

While McGahern carries much in the way of Canadiana, as befits an Ottawa bookseller, this book will be of primary interest to American collectors, even if it is written in French. The title is Mémoires de Paul Jones... or, the Memoirs of [John] Paul Jones in English. The remainder of the long title in French translates to, "it describes his principal services, and recalls what happened to him most remarkably during the course of the American Revolution, particularly in Europe, written by himself in English, and translated under his eyes by the citizen André." Americans will remember John Paul Jones as the "Father of the American Navy." At the time of the Revolution, America had no navy, so it was an opportune time for a father to emerge. Despite an absence of boats, the Americans did manage to scrounge up a few, and Jones commanded several. His most notable feats came when, undermanned, he harassed shipping off of England's coast and improbably won a battle. It was then that he uttered his most memorable words, "I have not yet begun to fight." Jones was honored not only by the Americans, but the French as well, whose antagonism toward the British long preceded that of the Americans. It was in connection with the French honors that Jones prepared a manuscript of his adventures fighting the hated British. Since Jones did not speak much French, his aid, Benoit André, prepared a translation, which was presented to King Louis XVI. The book of his exploits, the first printed biography of Jones, was not published until 1798 in André's French translation. Item 27. Priced at CAD $10,000 (Canadian dollars, or approximately $7,670 U.S. dollars).

Next up is a look at primarily Atlantic Canada in the first half of the 19th century, which contains a notable reference to the early days of the nation's national pastime. Sir Richard George Augustus Levinge was a 7th Baronet of something, but also a captain in the army. He was sent to Canada around the time of the rebellion (1837) and stayed a few years. He recorded his observations, and wrote them in his book, Echoes from the Backwoods: or, Sketches of Trans-Atlantic Life, published in 1846. Levinge provides tips for emigrants, covering costs of provisions, clothing, livestock, and farming tools, reports on trade and the proposed railway, hunting and fishing trips. He describes the tense political situation at the time in Lower and Upper Canada, and his trip to the U. S. Of particular note, he describes the still new game, imported from England, being played in Canada. It involved knocking a ball around with a stick until you could get it in a goal, but since Canada is frozen over so much of the time, they were playing the game on ice. Levinge provided the first description of hockey in Canada, other than one presented earlier by explorer John Franklin, when the men on one of his expeditions to the far north played the game on a lake in the Northwest Territories. Item 34. CAD $1,500 (US $1,150).

Here is a book of interest to collectors of both Canadiana and Americana. Alexander Ross was born in Scotland, but emigrated to Canada as a young man. He spent most of his career in the fur trade in the west, often living in the wilderness. This was an area whose ownership was contested, primarily by the U.S. and Britain (for their Canadian colony), with lesser claims by Spain and Russia. Item 50 covers a relatively brief period in Ross' career: Adventures of the First Settlers on the Oregon or Columbia River: a Narrative of the Expedition Fitted out by John Jacob Astor, to Establish the "Pacific Fur Company;" with an Account of Some Indian Tribes on the Coast of the Pacific. This first edition was published in 1849, though Astor's trading post at Astoria had a brief lifespan, from 1811-1813. Astoria is notable as the first American outpost on the Pacific coast, part of the justification for America's claim to Oregon. It was hard to make a go of Astoria, particularly with trade disruption caused by the War of 1812. Astor sold his Pacific assets to the North West Company, and Ross went on to work for them and later the Hudson Bay Company. Item 50. CAD $2,000 (US $1,530).

France supported the aforementioned John Paul Jones and the American Revolution not so much out of a love for freedom as their hatred for their long-time enemies the British. Similarly, the British aided South American revolutionaries not out of love for freedom but out of their desire to dismantle their rival, Spain's, empire. This is why George Washington warned against becoming involved in entanglements with European powers. Their wars never ended. Gustavus Hippisley was a colonel with the First Venezuelan Hussars, a brigade sent to South America to assist Bolivar and the revolutionaries in their war for independence. The account covers his journey to South America and stops along the way, the work of the brigade, and includes an appendix of various documents including orders issued by Bolivar and others. It was a terrible experience, most of the men succumbing to disease rather than battle wounds. Hippisley provides a warning to others. McGahern notes that this is "a fascinating account of South American independence movements," despite Sabin's claim (quoting an 1834 issue of Blackwood's Magazine) that "Lord Byron made use of this work to put himself to sleep." The title is, A Narrative of the Expedition to the Rivers Orinoco and Apure, in South America, published in 1819. Item 24. CAD $3,000 (US $2,297).

John Stuart Mill was a philosopher, a Utilitarian, who supported many liberal causes of his day – democracy, freedom of speech, women's rights – all controversial in the 19th century. Utilitarianism preaches that choices should be made on the basis of what provides the most good for the most people. However, Mill realized there was a problem with this. The majority could impose tyrannical rule on the minority, even in a democratic society. There needed to be protection of individual liberty within a utilitarian society. Mill described his ideals in On Liberty, this first edition published in 1859. McGahern notes that this was the second most famous book published in England in the year 1859, it also being the year that Darwin published his On the Origin of Species. Item 37. CAD 4,500 (US $3,447).