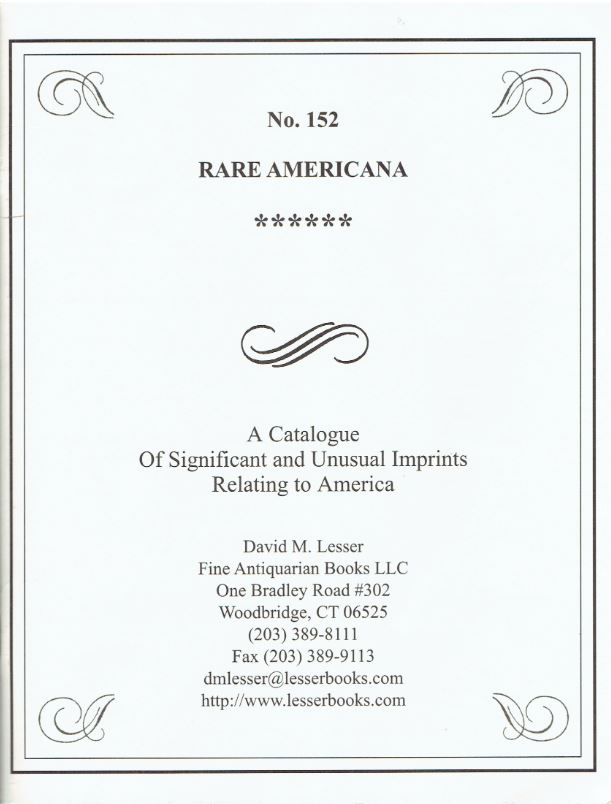 David M. Lesser Fine Antiquarian Books has published their Catalogue 152 of Rare Americana. There are books, pamphlets, broadsides, manuscripts and ephemera, overwhelmingly American with a few British entries. They cover all sorts of issues, from highest theological and political issues, to the lowest lives of crime. A lot is always going on in America. Here are a few examples.

Steamboats elicit romantic notions of large boats paddling up the river in olden times. We tend to forget a certain shortcoming they had. Occasionally, they would blow up. Such was the case with the Moselle, one of the fastest boats running the rivers from Cincinnati to St. Louis. It was built for speed, and had already proven how fast it could move when less than four weeks after her maiden voyage, the Moselle exploded. More exactly, its boilers exploded, all four at once. Something applied way to much internal pressure shortly after pulling out of the dock in Cincinnati. The Captain may have been pushing her too hard, but there must have been design issues as well. The boat quickly sank to the bottom. Over half of her almost 300 passengers died. Item 19 is the Report of the Committee Appointed by the Citizens of Cincinnati, April 26, 1838, to Enquire into the Causes of the Explosion of the Moselle... This investigation includes an eyewitness account of the disaster, along with a drawing of a proposed safety device, a "New Spring Manometer." Manometers are designed to measure pressure, so presumably Dr. Locke, its inventor, designed it to either warn the Captain of too much pressure, or perhaps shut down the boilers in such a circumstance. Priced at $650.

Here is one of those British items, and it helps to explain why Americans never understood the British in those old days (nor the British the Americans). Sir Eyre Coote had a long and distinguished career in the British military. He signed up at the age of 14, and fought throughout the American Revolution, from 1776-1781, being captured at the end. He was released, returned home, and participated in numerous of the ongoing battles Britain was constantly engaged in with its European neighbors for the next three decades. His bravery and performance led to many promotions in rank, all the way to General, and being knighted as well. For three years, he served as Governor of Jamaica. However, he became a bit eccentric as the years wore on. One of eccentricities finally brought him down. Coote walked into a boys' school and paid some of the boys for the right to flog them. He then paid some more to have them flog him. A school nurse caught him in the act. He managed to evade prosecution by making a large contribution to the school, but the military got wind of the incident, and after some debate, determined it had to investigate. It found his conduct unbecoming of an officer. He was dismissed from the army and removed from the Order of the Bath, to which he had been knighted and derived the title "Sir." Item 33 is an account of the military investigation of Coote's conduct, published in 1816: A Plain Statement of Facts, Relative to Sir Eyre Coote... Item 33. $250.

The internecine warfare within the Republican Party today is nothing new to politics. There have been previous party nominees who have incurred the wrath of other notable figures within their own party. Take the Federalists in 1800 as an example. John Adams was running for reelection when fellow party stalwart Alexander Hamilton wrote this Letter from Alexander Hamilton, Concerning the Public Conduct and Character of John Adams, Esq. President of the United States. Hamilton was not impressed with his party's nominee. He says Adams suffers from "great and intrinsic defects in his character, which unfit him for the office of Chief Magistrate." Among them, Hamilton cites "a vanity without bounds, and a jealousy capable of discoloring every object." It seems like there is nothing new under the sun when it comes to politics. Hamilton did not support the opposing party candidate, Thomas Jefferson, but rather fellow Federalist Charles Pinckney, who was running for Vice-President. This was the day when electors voted for presidential and vice-presidential candidates without distinction, meaning either could become president with a little engineering. Item 53 is Hamilton's letter. Hamilton was not the one to publish his private letter. Jefferson's supporters did it. $850.

Here is a political party that had a brief lifespan in the mid-1850's, but for a short period, it burned very brightly. Item 43 is Know Nothingism; or, the American Party. By Franklin, published in 1855. Safe to say, "Franklin" wasn't Ben. He claims to be a "spectator," not a member of the party, but his pro-Know-Nothing bias makes that claim dubious. He justifies the party's anti-immigrant stance as being a response to "the peculiar exigencies of the time." Specifically, he is referring to "the vast flood of immigration to the country from foreign parts," people who are "ignorant, many brutish... They are in no sense or degree Americans." This somehow sounds familiar. The undesirable immigrants, in the Know-Nothings view, came from Europe, though not England or the more northern parts of the continent. It was Catholics, or "Papists" as they are described. "Franklin" explains, "...ours is a Protestant country...and the American people, as a body, never intended it should be anything else." The "Papal hierarchy," on the other hand, "is a political corporation, animated by political designs." It is "the last thing in the world to be trusted." As a political corporation, "Franklin" concludes, "it can only be opposed by political action." The Know-Nothings made a credible run for the presidency in 1856, with former President Millard Fillmore as their standard-bearer, but the party quickly disintegrated thereafter as Americans became more consumed by the battles between North and South. $250.

Before there was "Just Say No," there was the National Cold Water Army. This was the era when it was drink rather than drugs that was the primary issue, and adults were trying to convince the young to just say no to alcohol. The time was the 1840's, and the Cold Water Army was a children's temperance group. The temperance movement would be a major force in America right up to the time it finally succeeded in banning the sale of alcohol – Prohibition, the passing of the 18th Amendment to the Constitution in 1919 (repealed in 1933). Item 92 is a certificate to be given to a young person in 1842 who took the pledge (no name has been filled in on this copy). The pledge begins,

To all that can intoxicate;

I'll never use the filthy weed,

Then from its evils I'll be freed."