A Variety to be Found in Jeff Weber's Bookseller's Cabinet 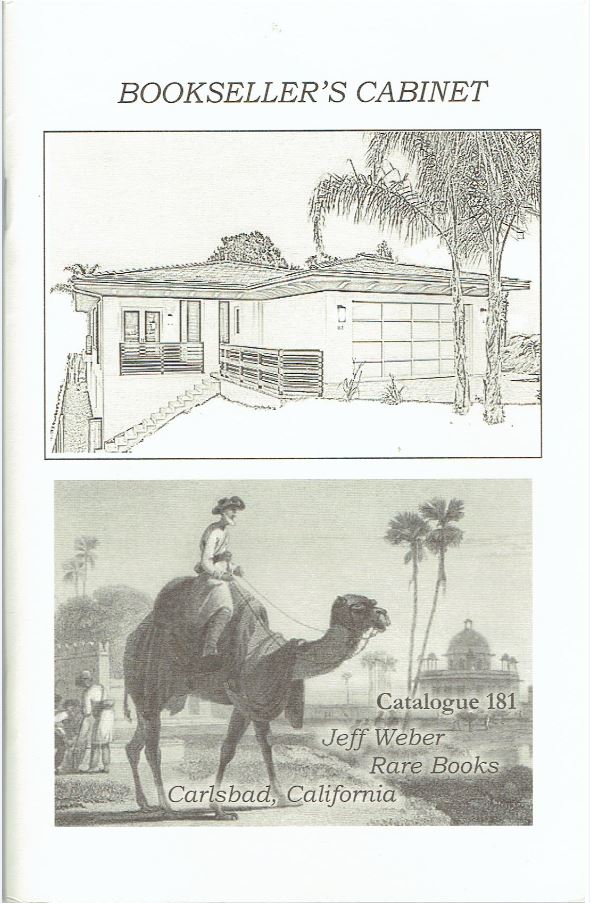 Jeff Weber Rare Books has issued their Catalogue 181 Bookseller's Cabinet. What's in the bookseller's cabinet? Turns out there are four types of not closely related material. Weber carries many other varieties of books, but his cabinet holds four categories: Americana & California; Early Printed Books; Fine Printing, Books on Books, Illustrated & Literature; and Sports, Pastimes & Etc. There are books from very old to quite recent, with many well within the reach of even a beginning collector. Here are a few samples of the books you will find.

We begin with a piece of notable Californiana. On January 24, 1848, James Marshall was building a water-powered sawmill for John Sutter. James S. Brown was part of the "Mormon Battalion" working on the mill. Marshall wrote a book about the event, and another was finally prepared many years later. That would be James Brown's account published in 1894: California Gold. An Authentic History of the First Find With the Names of Those Interested in the Discovery. According to Brown, Marshall picked a few tiny pieces of something from the water and exclaimed to the others, "Boys, I have got her now." The other men weren't very interested, but Brown says he took the largest piece and tested it with his teeth. When it did not give, he proclaimed, "Gold, boys, gold." The Gold Rush was on. Only 55 copies were reported to have been printed of this small book. Item 1. Priced at $3,500.

William Pemble was a Puritan theologian who wrote at least 11 books, many popular at the time (though not now). All were published after he died in 1623 at the age of just 32. His tutor and mentor had them published. This book strays from his typical theological treatise, though the influences of his religious beliefs affect some of his conclusions. Item 25 is A Briefe Introduction to Geography containing a Description of the Grounds and generall Part thereof, very necessary for young Students in that Science, published in 1630. Pemble sought not to provide the usual geography describing specific lands and coasts, but rather to speak of more general properties, such as climate zones, longitude and latitude, and the nature of general features such as mountains, oceans, and continents. Pemble concluded that the earth and water are round. As he noted, it is not square, "nor three-cornered, nor Piramidall, nor conical on Tapperwise, nor Cylindricall...nor hollow like a dish." He did not consider mountains and valleys contradictory to the earth's roundness as those are incidental variations, and the roundness of water is demonstrated by watching a ship at sea dip below the horizon. However, he did not accept Copernicus' theory that the earth revolves around the sun. He stated that the earth is immovable, a conclusion he was able to reach from personal observation. Never believe your eyes. $2,500.

Henry Wadsworth Longfellow was a brilliant student in college. He there determined his success in life would be based on literary accomplishments. He also wrote some minor poems that were published in magazines, to no great account. However, his talents quickly got him a job as a professor, and his literary talents were put to work translating European texts. That's where he stood at the age of 32 when he published his first book of poetry. It contained numerous translations of others' poems, but also nine of his own. It was an immediate success, and Longfellow was on the journey that would make him America's most popular and beloved poet in the 19th century. Item 69 is a copy of Longfellow's first book of poems, Voices of the Night. This is not the first edition, which was published in 1839, but an 1845 issue printed to meet the continuing demand. In time, though Longfellow's name continues to be well known, his poetry lost its earlier luster, now being seen more as unoriginal and derivative of European styles. Nonetheless, his contemporaries did not feel that way about him, treating him with the honor of one of America's greatest statesmen. $25.

The best known exploration of the Colorado River and the Grand Canyon was conducted by John Wesley Powell in the 1870's, but it was not the first. In 1857, Joseph Christmas Ives (so named because he was born on Christmas day) headed an official expedition up the river. Unlike Powell, who was taking on the more treacherous rapids from the north, Ives built a steamboat and went upstream from the river's mouth. He made it to the canyon, and then set out by land to Fort Defiance in today's Colorado with his report. Ives reported on the geology, botany, and native tribes living in the area. He was more interested in the land's practical uses than its beauty, concluding the dry barren land wasn't good for much of anything. Item 6 is the Senate version of his account, Report upon the Colorado River of the West, explored in 1857 and 1858 by Lieutenant Joseph C. Ives... published in 1861. This copy includes various associated reports, illustrations by his accompanying artist German Heinrich Balduin (Baldwin) Mollhausen, and maps of the canyon by topographer Frederick W. von Egloffstein. Item 6. $1,400.

We conclude with a recent book containing detailed information concerning a unique form among the book arts – for-edge paintings. These are those remarkable paintings drawn upon the fore-edges of books, requiring an unusual skill. The title is An Annotated Dictionary of Fore-Edge Painting Artists & Binders (Mostly English & American). The Fore-Edge Paintings of Miss C. B. Currie; with a Catalogue Raisonné. The author is bookseller Jeff Weber himself, the work published in 2010. With 432 pages and many illustrations (along with being signed by the author), you won't find a more detailed treatise on the subject. It contains essays on the history of the art and the challenges it entails, and a comprehensive dictionary of every artist and binder known to create fore-edge paintings. Finally, there is a section on Ms. C. B. Currie, perhaps the most prolific of all fore-edge painters, but about whom little is known. She probably painted close to 200 fore-edges in the early 20th century, working with bookseller Sotheran's and bookbinders, and her name is known because, unlike most who preceded her, she signed and numbered her paintings. However, virtually nothing is known of her personal life. $400.

Jeff Weber Rare Books may be reached at 323-344-9332 or weberbks@pacbell.net. Their website is found at www.WeberRareBooks.com