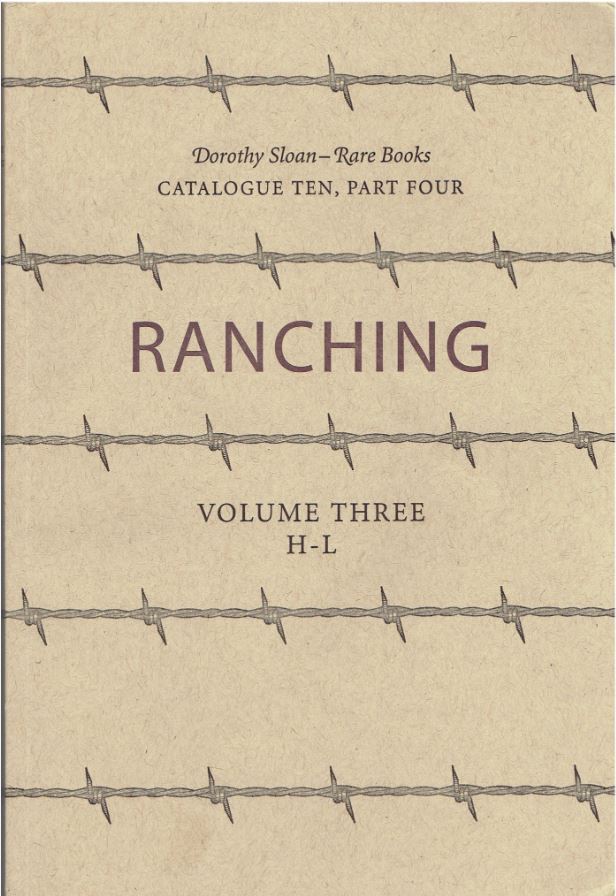 Dorothy Sloan Rare Books of Austin, Texas, has issued a massive catalogue entitled Ranching. It contains almost 1,000 books related to the field. Actually, this is hardly all in the collection, as it is Catalogue Ten, Part Four, Volume Three H-L. This is the third volume on ranching, covering only a small part of the alphabet, and it still manages to offer almost 1,000 items. This is a thorough collection.

It should be noted that the focus is ranching in the American West. Ranching takes place in the East and South and North, and in many other countries as well, but ranching plays a deeper role in the life of the West, and is certainly more part of a romantic history in that part of the nation.

Sloan notes that cattle raising precedes the colonization of America. It took place in Europe and Africa long before. However, ranching requires a lot of land. As agricultural and industrial uses that required less land, and consequently were more productive per acre, arose, ranching was pushed more and more to the outskirts of society. That would come to be America in particular for the English. From colonial times up to the Civil War, ranching was conducted mostly in the South and East, and then in what was still referred to as the "West," but today is more Midwest or South, still east of the Mississippi River. Finally, with the end of the war and the rapid rise of settlement of the lands west of the Mississippi, the raising of cattle moved to the West. There was much land available. As farms took over the more fertile areas, cattle raising moved even farther west, much to the more barren areas such as West Texas. It wasn't suitable for agriculture, but still had enough plant life for cattle to forage.

This began the romantic era of ranching. Cattle raisers branded their cows and let them run free over the great open spaces. No one owned the land; it was available to all. Cattle would be fattened off the land as much as possible and then driven hundreds of miles across open prairies to railroad stops where they could be shipped to consumers to the east. As Sloan points out, the era lasted only about twenty years. Ranchers in the Northeast were more scientific, using feedlots, fencing in their land for their own exclusive use. They were the descendants of southern England, where land was less available. Southern ranchers were the descendants of the Scotch-Irish, who had raised their cattle on open land, a practice they continued in America. The two came into conflict in the West. The wealthier, established ranchers wanted to fence off land for their own use, the smaller and less wealthy ranchers wanted the open spaces, where cowboys could feed, herd and drive their cattle across the land. Money talks. The government, not surprisingly, sided with the wealthy and powerful. By the latter part of the 19th century, the land was fenced off, and the romantic era of cattle drives was over. Ranching became a big business, with some ranches achieving enormous size. The old-time cowboys, and all that the trade attracted – gunslingers, western movie style lawmen, hanging judges, and the Old West that we imagine came to an end.

These books describe both eras of ranching. They also cover much more, particularly from the Old West period. You will find books about the outlaws and sheriffs and all you would expect from the time, but they will also in part describe ranching. The two were too closely tied together not to. Here are just a few samples of what will be found in this enormous selection of books.

We begin with a book that brings us back to the early days of western ranching. Item 2734 is The Trail Drivers of Texas: Interesting Sketches of Early Cowboys and Their Experiences on the Range and on the Trail During the Days that Tried Men's Souls, edited by J. Marvin Hunter. It includes both volumes, published in 1920 and 1923. Much of the work compiling these stories was done by George Saunders, President of the Old Time Trail Drivers' Association. Saunders founded the organization in 1915 and set about gathering the accounts of those who participated in these drives between the end of the Civil War and the late 19th century. For many, the excitement and danger of the drives that took them from Texas to Kansas behind a herd of cattle were the high points of their lives. Of course, there were differences in their exact memories, these stories being reminiscences of old men many years after they rode the range. Nonetheless, there is no better book for a feel of what cattle drives were like in the golden age of the open range. Adams describes this book as, "perhaps the most important single contribution to the history of cattle driving on the western trails." Priced at $600.

Saunders insisted most cowboys were good men, no more criminals among them than in any other profession. Here is one of the bad seeds. I. P. Olive (Isom Prentice "Print" Olive) emerged from the Civil War a hardened man. At the time, there were many longhorn running loose in the chaos of the war, and Olive was one who rounded them up and took them to market in Kansas. There were many rustlers as well, of which he might be considered one, but Olive was not about to tolerate anyone taking his cattle. His response was not to tell the Sheriff or take people he believed were stealing his cows to court. Rather, it was to shoot them. He did this many times. Finally, he concluded it was time to leave Texas and moved to Nebraska. He became a successful rancher, but his habits towards rustlers, and settlers he felt were invading his "private" land (actually, government land) did not change. That brings us to the next book, Olive's Last Round-Up, by A. O. Jenkins, circa 1930. It concerns an incident with settlers Luther Mitchell and Ami Ketchum. Olive's brother Bob paid them a visit, but evidently it was not a friendly encounter. Bob ended up dead. "Print" returned the favor. He always claimed he never killed anyone who didn't deserved dying, but not everyone shared that point of view. Olive would be on the move again, eventually ending up in Colorado, where one day, entering a saloon unarmed, he encountered a man with a grudge against him. Olive, then age 46 (the year was 1886), finally found himself on the wrong end of a gun. Item 2846. $300.

Charles Goodnight started along a similar path as I. P. Olive, but his trail led to a very different conclusion. Like Olive, a Confederate veteran of the Civil War, he too participated in the round-up of escaped cattle in Texas after the war, driving them from West Texas to New Mexico. However, he also became a respectable member of his community, eventually settling down to operate a huge ranch in the Texas panhandle, where he built an enormous herd of cattle. He helped to preserve the buffalo, was first to breed "cattalo" (also called "beefalo"), a crossbreed that didn't work out as well as hoped. He established a college for the children of ranchers and later had a town named for him. He wasn't perfect, and apparently approved of some extrajudicial justice for rustlers, but for the most part was highly respected. Many regard him as the most important rancher Texas ever produced. He was also one of the longest living. After his first wife died, he married a distant relative who was also his nurse at the age of 91. She was 26. Two years later, she inherited when he died in 1929, long into the modern ranching era. Item 2326 is his biography, Charles Goodnight: Cowman and Plainsman, by J. Evetts Haley, published in 1936. $850.

There is no more famous rancher than this man, though his fame is attributable more to other ventures. Theodore Roosevelt was a young man when he went on a hunting trip to the Dakota Territory in 1883. He purchased a ranch, but had no intention of staying. The following year, he was struck with an unimaginable tragedy. Both his wife and mother died on Valentine's Day 1884. He needed to get away. Roosevelt headed back to Dakota, purchased another ranch, and stayed until a bad winter and political callings pulled him back to New York. Nevertheless, his time on the ranch was very important to the values Roosevelt developed. His role as one of America's great conservationists was formed during his time operating a ranch in the distant hinterlands. Item 2309 is Roosevelt in the Badlands, by Hermann Hagedorn, published in 1921. It is a close look at this formative time in Roosevelt's life. $75.