Cartography from the William Reese Company 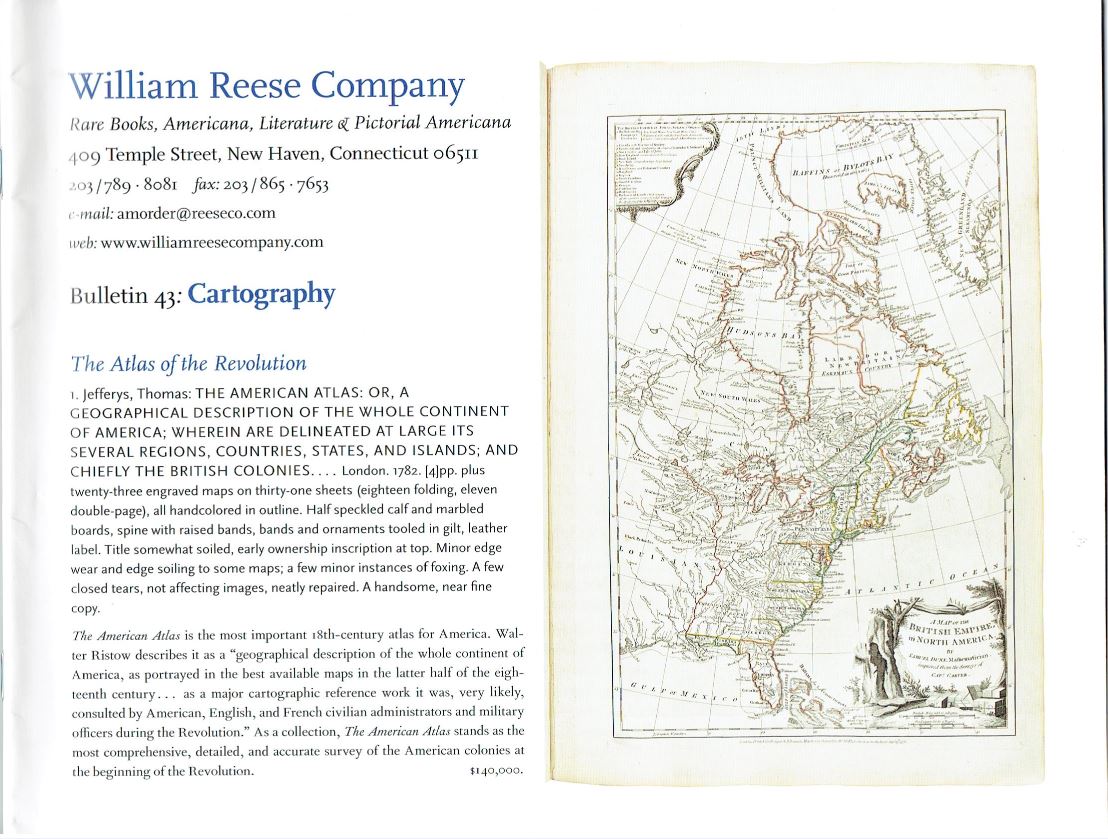 The William Reese Company has prepared one of their bulletins, this #43, with the title Cartography. That one word describes it well. It is filled with maps, many separate, some in atlases. The maps are of America, though not necessarily created in that land. Going back to the days before the American Revolution, most American maps came from England, a few from France or other Europeans countries. It is not until the nation is independent that we see a serious production of maps and atlases on American soil. Here are a few examples of these maps, both pre and post Revolution.

We begin with one of the earliest reasonably accurate maps of a portion of today's United States. It comes from England's first attempt to colonize America, not the Pilgrims in Plymouth, but the ill-fated Roanoke colony of the 1580's. The map is titled Americae Pars, Nunc Virginia Dicta. It comes from Theodor De Bry, who published an account of the colony in 1590, though he relied on the reports of others, not having gone there himself. The map was copied from John White, who was Lieutenant Governor of the colony, and the creator of maps and illustrations of it. Reese notes that this was the most accurate map of any portion of America produced in the 16th century. It depicts a section of the Virginia coast, which Reese points out is mostly part of today's North Carolina. Item 53. Priced at $23,000.

Eighty years later, when French mapmakers Nicolas and Guillaume Sanson produced their map Amerique Septentrionale (1669), America's east coast was fairly well known. The same could not be said for the west. This map, taken from Sanson's atlas, depicts the colonies of the east, the Caribbean, and the Gulf of Mexico with a high degree of accuracy. However, Sanson was lost when it came to the west. The only part of the American west coast displayed is California, which in keeping with a belief that persisted through the first couple of decades of the 18th century, is shown as an island. It was believed that the Gulf of California was not a gulf at all, but part of the Pacific, surrounding California. Above California, and most of the area which in time would become the Louisiana Purchase, is not depicted at all. It is a large blank, waiting for later generations to fill. Item 46. $3,500.

Next we have an American first, an important atlas of great rarity. It is the work of Matthew Clark, published in 1790: A Complete Set of Charts of the Coast of America from Cape Breton to the Gulph of Mexico. This is the first atlas that was entirely produced in America, previous ones coming from England. Only individual charts had been made in America of the American coast and continent before. This is one of only eight copies known to exist, the others being in institutional collections. Reese notes that this copy "is likely to be the last complete example that is ever offered on the open market." Item 8. $650,000.

Item 41 is a travel account, rather than an atlas, but it contains some of the most important American maps. It is An Account of Expeditions to the Sources of the Mississippi, and through the Western Parts of Louisiana...and a Tour through the Interior Parts of New Spain, by Zebulon Pike, published in 1810. What is notable is the second journey, the one into what was still part of the Louisiana Territory and northern New Spain (Mexico), both of which today comprise much of the American Southwest. Pike was sent to explore territories south of those visited earlier by Lewis and Clark. It took him to the Colorado Rockies, and the discovery of his namesake, Pike's Peak. He then headed south, ostensibly missing his route home, but more likely to see what the Spanish were up to. It got him and his men confined to a Mexican prison for a while until American officials were able to free them. The book is Pike's account of his journey, while the maps were the first well-drawn ones based on first-hand exploration of the Southwest. This copy belonged to, and carries the bookplate of, Dewitt Clinton. Clinton was a naturalist, though he is better known as a New York governor, the man who promoted construction of the Erie Canal, and the first Clinton to run for the presidency (he was the Federalist candidate in 1812, losing a close race to James Madison). $18,500.

When Pike headed west, he was leading an expedition to explore land never seen by Americans. A few decades later, ordinary Americans would be heading west in droves. They were seeking to settle the newly opened territory of Oregon. Item 43 is what you wanted to have to get there. It is Charles Preuss' Topographical Map from Missouri to Oregon Commencing at the Mouth of the Kansas in the Missouri River and Ending at the Mouth of the Wallah-Wallah in the Columbia, published in 1846. This is your Oregon Trail map. Preuss had been the cartographer on Fremont's first two expeditions, so he knew the area, along with being skilled at drawing maps. The map comes in seven individual sheets, with the 1,670-mile route drawn to scale. $7,500.