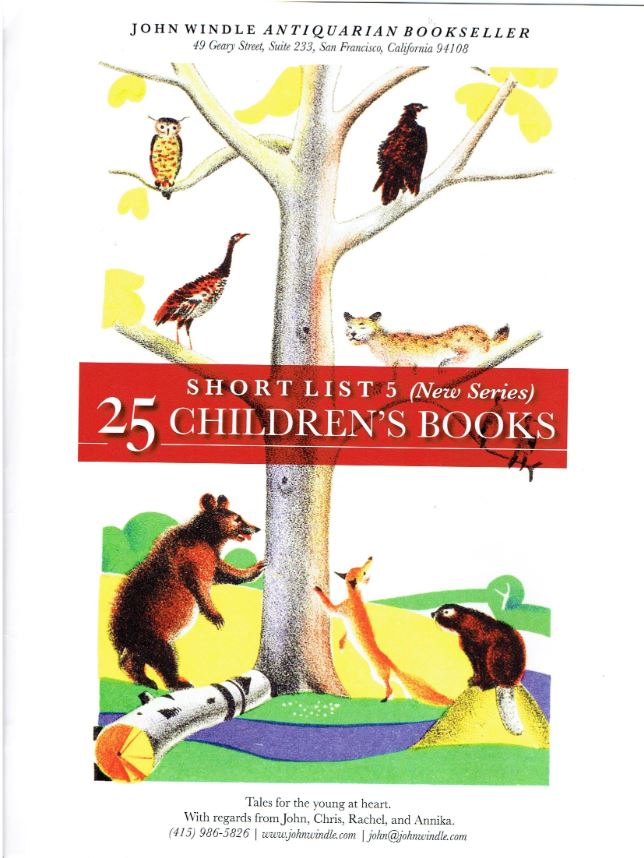 John Windle Antiquarian Bookseller recently released their Short List 5, featuring 25 Children's Books. The title covers the type of books offered, though the styles are different from most of the books we publish for the young today. The dates range from the 18th century to the middle of the 20th (with one more recent reprint). While the styles and, at times, moralisms might not quite be what we would present today, these are not offensive works, as was often the case in the past, with racial and ethnic stereotypes and various sorts of ugliness. While maybe not your first choice to give the kids today, you won't be embarrassed by these books either. Here are some samples.

This is an example of a book that might be somewhat dated, though the basic principle behind it is still valid. Gelett Burgess was a humorist who wrote between the turn of the century and the middle of the twentieth. He created a series, and even comic strip, based on characters he called "Goops." They were somewhere between children and aliens. They had round, hairless heads, but childlike bodies, regularly interacted with adult humans, and behaved like spoiled children. Their bad behavior was there to teach children how not to behave, or more exactly, how to behave. These were humorous books designed to teach children good manners. While what is considered good manners has in many ways evolved over the past century, the formalisms of such things as table manners having changed, the lesson of teaching children to be polite and respectful of others is hopefully not totally passé today. Item 2 is one of Burgess' harder to find titles, Blue Goops and Red: A Manual of Manners for Children, published in 1909. Burgess is best remembered today for one short poem you can probably recite from memory – Purple Cow. Item 2. Priced at $495.

Here is another short poem you also most likely have committed to memory, although its origin and meaning are a mystery today. It was first recorded in the 18th century, but it may well refer to events from much earlier (or maybe contemporary). Various theories have been posited. Item 13 is a unique printing and format of this old rhyme: Pictorial Humpty Dumpty. [The story of Humpty Dumpty in pictures, with versions of the rhyme in English, French, Hebrew, Latin, Welsh, Greek, German, and Italian]. The creator of this version was "Alquis," a pseudonym for Samuel Edward Maberly. It was published in 1843. What Maberly created was an accordion fold, hand-colored panorama based on this strange tale. On one side, there are illustrations with verse in English and French, on the other, are the verses in the other languages. Item 13. $3,750.

Item 22 is a short book, just six pages. The cover has a celluloid plaque of a young girl set in. It is a first and only edition, published in 1888. The title is Children of Summer. The writer of the three pages of verse was poet Edith M. Thomas. Thomas is mostly forgotten today, but was very much in demand at the turn of the century, magazines seeking the limited amount of verse she wrote. The illustrator was Maud Humphrey, equally popular in her field at the time. She is best known for her drawings of children, classical children's portraits of that era. What I didn't know before about Maud Humphrey was that she was married to Dr. Belmont DeForest Bogart, and that her son was the still very famous actor Humphrey Bogart. Thank Maud for Bogart having that uncommon first name. $895.

Here is that recent book, but based on an earlier work: The Tale of Peter Rabbit. A New Printing from the original line-blocks made for the first Private Edition of 1901. Introduced by Maurice Sendak. Of course, the author is Beatrix Potter, the very popular children's writer of the beginning of the 20th century, with the introduction by the comparably popular children's author of the end of that century. The book has been signed by Sendak and printer Iain Bain. The original story of Peter Rabbit was written in a letter by Potter to cheer up a sick child of a friend. Several years later, she thought it might make a good children's story. She wrote it up, but publishers were not interested, at least not unless she made several changes. Potter was uncompromising, so instead, she self-published the book in a run of 250 copies. Those fortunate enough to receive a copy loved it, and publisher Frederic Warne relented, agreeing to publish a second edition with few changes. However, there is one major difference between the first (self-published) edition and the first trade edition. Outside of a color frontispiece, the illustrations in the true first were pen-and-ink drawings, just black and white. In the first trade edition, the illustrations are in color. It is those simpler, first edition drawings, which most fans of Peter have never seen, that are reproduced in this 1995 edition. Item 15. $795.