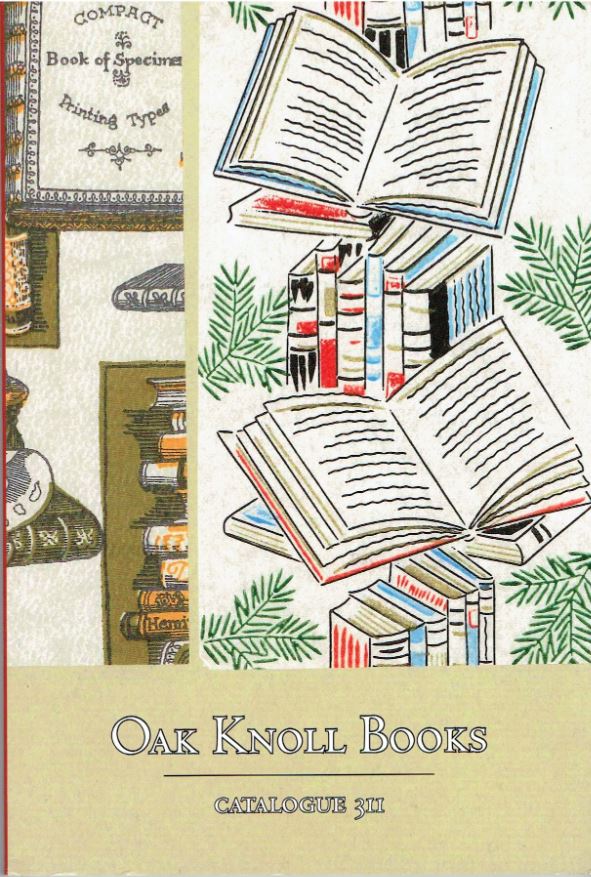 Oak Knoll Books has released their Catalogue 311. Miniature Books, Fine Press, and an Assortment of Books About Books. Oak Knoll specializes in the trade of books that represent more than just their textual content. That can include books that are works of art as much or more than text, or books that are about the book arts. This catalogue is divided into seven sections:

Here are a few selections from the over 300 items offered.

This catalogue contains a wide selection of miniature books and will be of great appeal to collectors of the genre. Here is a perfect representative sample – a bibliography of miniature books that is itself a miniature. It is a Bibliography of REM Miniatures, 1962-1978, Embellished with Original Illustrations, published in 1978. It was published by Robert E. Massmann of REM, and covers the early years of the Connecticut professor/miniature book publisher's career. It consists of two volumes, printed in a run of 250 numbered copies, bound dos-a-dos (bound together with the spine of one volume adjacent to the fore edge of the other). It contains hand-colored illustrations, which required a fine hand as it is only 2" x 1.75" in size. Item 105. Priced at $100.

Here is a miniature book that dates back to 1953, though it celebrates what is still the most recent British coronation. Item 28 is the Coronation of Her Majesty Elizabeth II, a very small book celebrating a large event in England. Queen Elizabeth II has reigned for over half a century, recently becoming Britain's longest ruling monarch, exceeding the 53 years of Queen Victoria. Considering that the 90-year-old queen's mother lived to 101, she may be reigning for many years to come. This miniature was published by the miniature book publisher Achille J. St. Onge of Worcester (the one in Massachusetts, not the one in Elizabeth's homeland). It was published in 2,000 copies, this one containing the miniature bookplate of Arthur A. Houghton, Jr., collector, philanthropist, and business executive of the family that founded the Corning Glass Works. $165.

Next up is a book about a man whose invention, Oak Knoll points out, "has almost as much impact as Gutenberg's printing press." Nonetheless, you've probably never heard of him. Nicolas Louis Robert was a French artilleryman who obtained a job as a clerk in the Didot publishing house around 1790. As he rose to foreman, Robert became acutely aware of the problems in the process of making paper by hand, not the least of which was discontent by the workers who slowly produced the paper. Robert set about to devise a machine that could produce much greater volumes of paper, while reducing the need for human labor. After several years of design, he came up with a machine that, rather than slowly producing single sheets one at a time, could roll off long lengths of paper, all of consistent, high quality. It was an invention that would allow for the production of mass quantities of affordable books. In 1798, Robert obtained a French patent. The drawings for his patent application were unknown until 1976 when Leonard Schlosser purchased them at auction. Schlosser made copies of Robert's drawings, but most of these were lost. However, he gave one set to his friend Henry Morris of Bird & Bull Press, Morris noted as a papermaker himself. In 2000, Morris published this book: Nicolas Louis Robert and His Endless Wire Papermaking Machine. Printed in only 150 copies, it contains information about Robert, paper collector and historian Schlosser, and reproductions of Robert's five patent drawings. It was Robert's invention that was later used to design the better known papermaking machines of Henry Fourdrinier. Item 143. $400.

Item 225 is not a book at all, not even a work on paper. It is a medal, cast in bronze. However, it commemorates the birth of the inventor of the printing press, Johannes Gutenberg. Happy 500th birthday, Johannes. Gutenberg was born in 1400, or thereabouts, and the medal was struck in 1900. It was produced by R. Hoe & Co, which made far more money off of Gutenberg's invention than Johannes ever did. One side of the medal depicts a 15th century printing press, the other a large newspaper press. The latter is in deference to Hoe & Co., the major manufacturer of newspaper presses at the time. The business afforded Robert Hoe the funds necessary to build America's greatest book collection of the era. $250.

For competing, inventor-of-printing medals, there is one celebrating the 400th anniversary of the invention of printing with movable type in 1823, which puts printing back to 1423, 30 years before Gutenberg. The claimant to precedence was Lourens Jansz Koster, of Haarlem, the Netherlands. It was not Koster himself who made the claim. Indeed, the claim first appears in a book from 1568. That seems a bit late, since Gutenberg books from the 1450's are known. Nothing allegedly printed by Koster is known to exist. Few credit Koster today with the invention, except, perhaps, in Haarlem. Item 226. $275.

Item 288 is a catalogue of greeting cards offered for sale: Prang's Christmas & New Years Cards. It was published by L. Prang & Co. circa 1891. Louis Prang was a German immigrant who tried his hand at a number of printing ventures. He achieved success printing high quality engravings – reproductions of art works, Civil War maps, and such. However, he also came up with the idea to print holiday greeting cards. He launched his initial line of Christmas cards in 1875, a novel idea at the time. As a result, he is frequently referred to as "the father of the American Christmas card." This catalogue includes 205 of his designs for cards and miniature calendars, including product number and price per set. $2,500.