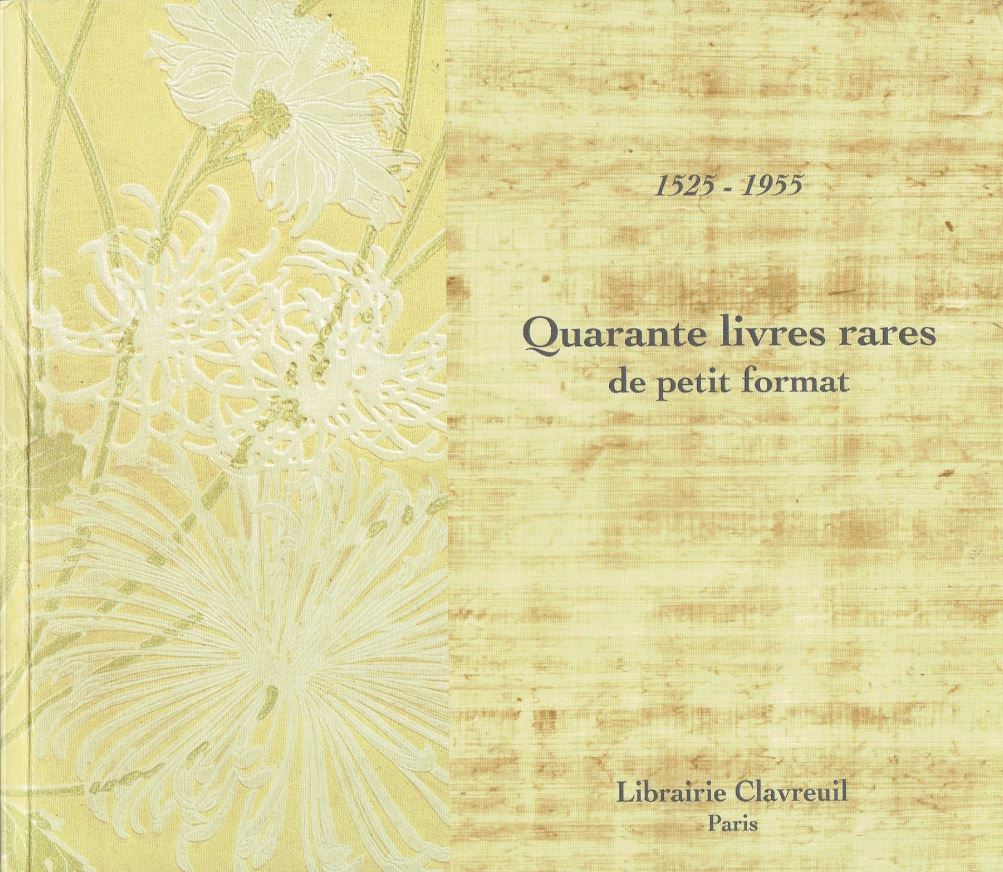 Librairie Clavreuil of Paris has issued a catalogue of Quarante Livres Rares de Petit Format. That would be 40 rare books in a small format. The dates range from 1525-1955. This catalogue, obviously, is in French. It is also true of the books presented. You will need some familiarity with the language to fully appreciate the books and descriptions. My own familiarity is quite limited, but we'll give it a shot. Here are a few of the books available.

The best children's books are those that appeal equally to adults. There is no greater children cum adult stories written in the French language than the Fables Choises, Mises en Vers of Jean de La Fontaine (selected fables in verse). La Fontaine was a 17th century French poet remembered mostly for these fables. The first set was issued in 1668, the last volume in 1694. The fables were meant to be instructive to children, filled with moral lessons taught by animals. Indeed, the fables were for the Dauphin, son of King Louis XIV, when he was 7 years old. This would be the Grand Dauphin, the great Dauphin, versus the Petit Dauphin, the small Dauphin, his son. Both waited to succeed to the throne while Louis XIV lived on and on. He outlived them both. Item 19. Priced at €85,000 euros, or approximately $93,442 in U.S. currency).

Speaking of the Sun King, Louis XIV, some writers were not above ridiculing him, though hiding behind anonymity. Louis was first married in 1660 to a proper royal connection. It was not a perfect marriage, Louis taking on lovers, though no worse than many such arranged royal marriages. He had a couple of illegitimate children with a favored lover, who would later be legitimized. Madame de Maintenon would first appear in the royal household as a caretaker for those children and aid to the King's lover. In time, The King took a shine to Madame de Maintenon in place of his former love. That was the situation when the Queen died in July 1683. Just three months later, the King apparently married Mme de Maintenon. We say apparently as there was no official announcement, or public record of a marriage, though historians generally agree the two were married, and so remained. Mme de Maintenon was not of proper blood. She could not be Queen or such official position. The result of her status often led to digs about her and the King. Here is one from many years after the marriage – 1710. Item 26 is Entretien entre Louis XIV, Roy de France, et Madame la Marquise de Maintenon. It is supposedly a conversation between Louis and Mme de Maintenon that was an attack on the lady. €1,200 (US $1,320).

This book is something of an obscurity from a writer who was friendly with some of the most important names of his era, but has mostly faded into time. Pierre Simon Ballanche was a philosopher and theologian, a man who came of age during the French Revolution, and spent much of his life trying to make sense of it all. His problem was that he perhaps made it even more confusing to his readers. He had some kind of theological-philosophical construct that put him in no one else's view. It represented some sort of Christian aspect of the world, fall and rebirth, and various other forces I won't try to explain since I can't even understand explanations of his explanations. His acceptance of return to monarchy made him unpopular with those who had supported the Revolution, while his belief that the Revolution was part of the way things worked and therefore acceptable made him unpopular with monarchists. Meanwhile, his hard to decipher theories undoubtedly made him unpopular with most readers. Item 34 is L'Homme Sans Nom, the man with no name, published in 1820. It is quite a rare book, it having been rare even when new, published in just 100 copies. Ballanche instinctively knew it would not be a best seller. €1,200 (US $1,320).

This is a first French edition of a novel published in England three years earlier. The story of how Mary Shelley, wife of English poet Percy Bysshe Shelley, came to write her best-known book, Frankenstein, is well known. While on vacation, a group of friends had a contest to see who could write the best ghost story. Mary was but 19 years old at the time, and while I have never seen any official results of that contest, I would guess Mary won. Frankenstein is still Frankenstein, even when translated to French, so the title is the same. The first French was published in 1821, and may be hard to find in a search as this edition misspelled her last name as "Shelly." It is also dedicated to William Godwin, saying it was written by his niece, which is one I can't figure out, since she was Godwin's daughter. Perhaps just another mistake. Item 36. €30,000 (US $32,963).