The Fascist Era in Italy from Marc Selvaggio, Books & Ephemera 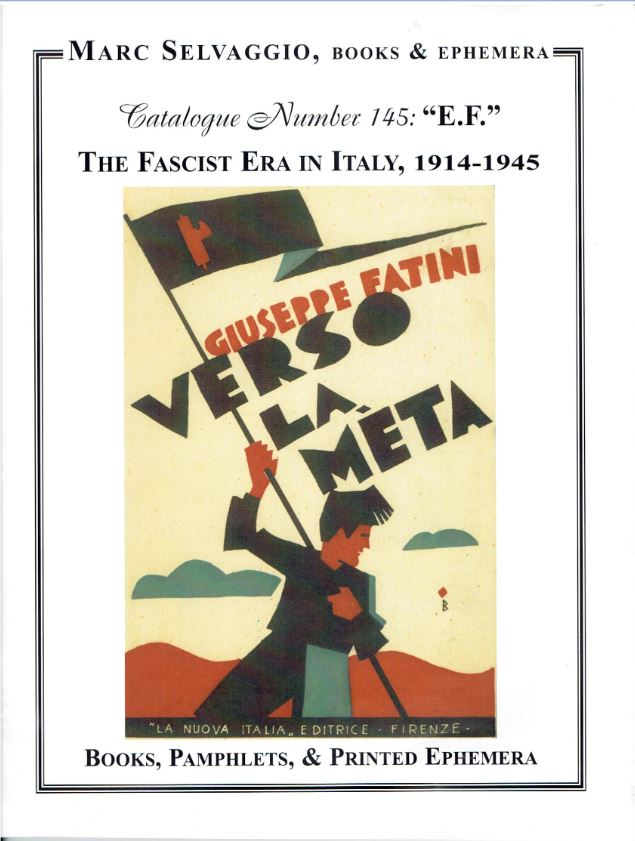 Marc Selvaggio, Books & Ephemera has issued a catalogue of The Fascist Era in Italy, 1914-1945. Many happy memories here! While some may think of the Fascist era as beginning with the March on Rome in 1922, Selvaggio dates its beginnings back to the start of the war in 1914. The ending is dated to the final fall of the Social Republic, after Mussolini's last two years as puppet head of northern Italy under Hitler's thumb, and his execution by Italian partisans.

Italy was on the winning side, one of the Allied Powers during the First World War. However, Mussolini did not believe Italy was given its due at the end of the war. He believed that the country was entitled to more land, be it in Europe or overseas colonies. England was holding them back. Italy's population was burgeoning and needed room to expand, and Mussolini believed it had a right to take that held by weaker countries to fill its need. Besides which, he felt the Italian people were racially superior to Slavs and Africans, so taking their land was justified, in his mind. For historical precedent, he cited ancient Rome as delineating the kind of empire to which modern Italy was entitled to rule. With the March on Rome in October 1922, Mussolini forced his way to power, and once there, began dismantling democratic institutions, gaining dictatorial power within a few years.

The books, pamphlets, and broadsides in this catalogue reflect Italy during the Fascist period. Some are specifically about Fascist rule and the worshiping of Mussolini, which were sentiments one wanted to display in this era. Other items are non-political, advertising material, nonpolitical art, and the like. Much combines other fields with Fascist promotion, sort of like Soviet art and everything else which always contained Communist propaganda. With a few exceptions early in the Fascist regime, you will not find anti-Fascist material from Italy until after the Second World War.

As a note, the catalogue is written in English. However, with only a handful of exceptions, the material offered is in Italian. Here now are a few samples of what is offered.

This book will give you a look at early Fascist leaders, quite literally. It is filled with their biographies and pictures. Item 172 (1924) is I Pionieri dell'Italia Imperiale, al Parlamento Nazionale, descriptions of the Fascist pioneers in Parliament. It starts with four pages devoted to "The Man of the Age," Benito Mussolini, of course. It follows with 67 single-page descriptions of members of parliament, including many portraits. Some of these people would stick with Mussolini to the bitter end, the end of a rope. Priced at $125.

Mussolini had his personal priorities, and whatever were his priorities were also those of the state. The result was great public interest in aviation. Item 123 is a 1930's paean to Mussolini on aviation, L'Aviazione Negli Scritti e Nella Parola del Duce, aviation writings of il Duce. It is an anthology of his writings on the subject, editorials, speeches, letters, and other documents. Some go back to his days prior to reaching power. The book contains 37 illustrations in poster style. $100.

Fascism reached into every aspect of society. Here is an example of just how widespread it was. Item 37 is Confederazione Fascista dei Laboratori dell'Agriculura. Vita e Problemi dei Pastori d'Italia. This translates to Confederation of Fascist Agricultural Workers. Life and Problems of the Shepherds of Italy. Even the shepherds had to be Fascist shepherds. This is a bit unsettling, given the gentle, peaceful images of shepherds and their flocks in the Bible. Fascist shepherds is an uncomfortable concept. This book is a report on their meeting in Rome on December 19, 1937. It includes a paper on Shepherding in the Empire, undoubtedly a recognition of Mussolini's dreams of empire building. $100.

Or, speaking about reaching into every aspect of society, item 42 is La Stella Moderna, by Ferruccio Faelli, published in 1937. This is a booklet portraying the design and operation of a modern cow barn. Nonetheless, it contains obligatory Fascist propaganda and quotes from Mussolini. Even cow barns needed to be Fascist. $35.

This is a rare anti-Fascist item from this era. It was published in 1933, and undoubtedly would have put someone in deep trouble had it been printed in Italy. It was printed in Chicago. That year, Italian aviation leader Italo Balbo flew from Italy to Chicago for the Century of Progress Exposition. Balbo was more of a fascist leader than aviator, one of those who designed the March on Rome and became a party and government leader. However, he also shared Mussolini's love for aviation. He quickly learned to fly and was appointed to various military positions, eventually Marshall of the Air Force, along with other government roles. In 1933, he was warmly welcomed to the U. S., honored in a parade in Chicago, was cheered at Madison Square Garden, and was invited to lunch by President Roosevelt. Still, America was not without vigorous opponents of Fascism by that time. This card stock piece from the Italian Anti-Fascist United Front and Anti-Fascist Committee of Chicago proclaims, "ITALO BALBO who has completed a mass-flight from Orbetello to Chicago to glorify Italian imperialism and fascist terror, is a MURDERER." Balbo had his differences and rivalries with Mussolini, who placed him in charge of their colony in Libya to get him out of Rome. He was still in charge of much military planning, though he would be the only substantial Fascist leader to oppose the alliance with Nazi Germany and the country's racial laws. He was killed in 1940 by friendly fire when his plane was mistaken for British. Item 147. $35.