The American Civil War from the George S. MacManus Co. 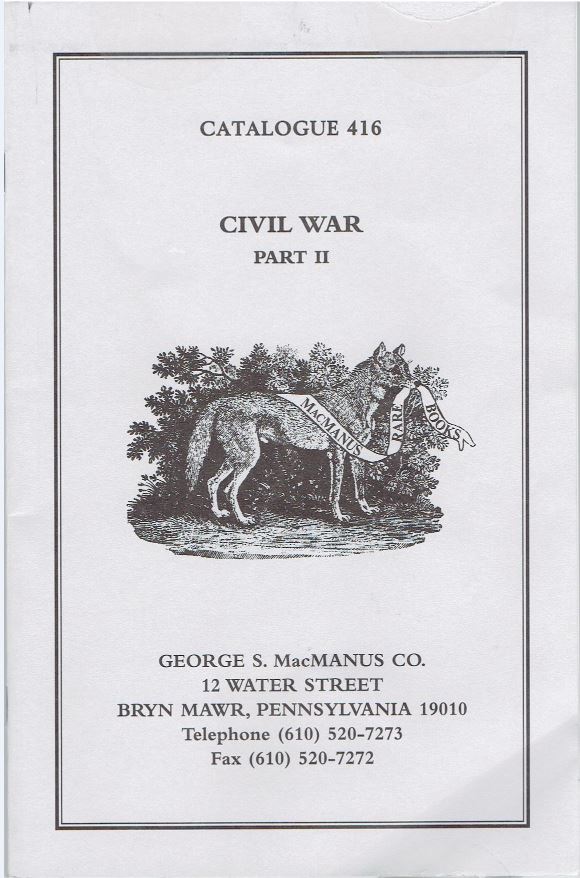 Books about the Civil War.

The George S. MacManus Company has released the latest installment of their current series on the Civil War: Catalogue 416 Civil War Part II. I suspect there will be many more to go, as this one covers the alphabet from BR to only CR. Nevertheless, they managed to come up with over 500 items in this narrow alphabetical range. Obviously, MacManus has a large collection of Civil War items, meaning just about every aspect of it, including obscure battles and regimental biographies, can be found. If you are looking for something about the Civil War, and if in particular you're trying find an author between Br and Cr, this is the place.

We begin with an account of the last days of the Civil War from a Confederate perspective. Rev. Giles Buckner Cooke was the last survivor of an era. He studied under Stonewall Jackson at Virginia Military Institute (reportedly he was a very mediocre student), joined the Confederate Army at the outbreak of the war, and then served on the staffs of several generals, including Benjamin Bragg, P. T. Beauregard, and finally, from 1864 until the war's end, Robert E. Lee. He was with Lee in the days leading up to the latter's surrender at Appomattox. After the War, Cooke settled into a long career as a minister, including operating schools and churches for blacks in the South. His pamphlet is entitled Just Before and After Lee Surrendered, published in 1922. By that time, Cooke was already the last surviving member of Lee's staff. He was not done yet, as this copy of his pamphlet contains a letter Cooke wrote in 1931, at the age of 92, to his "old friend" Mrs. Charles R. Hyde. He reminisces about her father, who likely served during the war. Even then Cooke was not finished, living to 98. Item 414. Priced at $750.

Next up is Sketches of the Rise, Progress, and Decline of Secession; with a Narrative of Personal Adventures among the Rebels, by William Gannaway Brownlow. This may sound like a post-war recounting of the rise and fall of the Confederacy, but it was published in 1862. Parson Brownlow was ahead of his time. He was a Methodist minister, newspaper publisher, and after the war, Tennessee Governor and Senator. Brownlow was never afraid to state his opinions, which were often radical and extreme, and to vitriolically attack those who disagreed with him. Some of his causes, and he had many, were righteous, others not so much. He attacked religions other than his own, Democrats and Republicans alike (he had been a Whig), drunkards (he was pro-temperance), abolitionists (he was pro-slavery), immigrants (he supported the Know-Nothings). Despite all this, he was a strong defender of the Union in border state Tennessee, so much so that he was jailed for awhile and forced into exile in the North during the war. He returned with a vengeance, his governorship so controversial that as recently as 1987, his portrait was banned from the Capitol in Nashville. Brownlow had been dead over a century by then. As a post-war governor, he became a Radical Republican, and despite his former support for slavery, believed freed blacks more deserving of civil rights than disloyal whites. He also aggressively fought the Ku Klux Klan during his terms as governor. His book, targeting the Confederacy, was prepared while in exile in the North, during which time he conducted a well-received speaking tour of many Union states. Item 57. $150.

Did you know that Abraham Lincoln was born in North Carolina, not Kentucky? Probably not, primarily because he wasn't. Tell that to James C. Coggins. Item 339 is a copy of his 1927 revised second edition of Abraham Lincoln: A North Carolinian with Proof. The accepted story is that Lincoln's mother, Nancy Hanks, was born in what is now West Virginia in 1784. She was likely illegitimate. Her mother, Lucy, lived with her siblings and parents (Abe's great-grandparents), but they all moved shortly after Nancy's birth to Kentucky. Lucy married Henry Sparrow in Kentucky, and Nancy later moved in with her mother, then with an uncle and aunt, and finally, she married Thomas Lincoln in 1806. Her son, Abraham Lincoln, was born in 1809. So they say. According to Coggins, based on stories handed down by old-timers in North Carolina, Nancy Hanks was actually raised in that state. She was also an illegitimate daughter in this story, but is raised with relatives in North Carolina, grows up, and is sent to work in the home of one Abraham Enloe. Enloe later moves away, but one day returns to the old homestead to visit tenants and then has his way with young Nancy. Mrs. Enloe is displeased to say the least, but Enloe feels responsible. He first gets his tenant to put up with Nancy and her baby. Gratefully, Nancy names her baby "Abraham" after his father, Abraham Enloe. Next, Enloe convinces his daughter and son-in-law to take Nancy and her baby to Kentucky. Finally, Enloe pays Thomas Lincoln to marry Nancy, whereupon Abraham Hanks, or Abraham Enloe, or Abraham Whatever, becomes Abraham Lincoln. Conspiracy theorists will love this book. $150.

Along with the famous, like Lincoln, this catalogue offers books about the obscure. Item 52 is A Colonel at Gettysburg and Spotsylvania, published in 1931. That colonel, who miraculously served in the Confederate Army through the entire Civil War and lived to tell about it, was Joseph Newton Brown of Anderson, South Carolina. During the 1850's, he worked for his father as a merchant, then trained for and became a lawyer in his hometown. However, at the beginning of the rebellion he signed up for the army. He was near Fort Sumter when the first shots were fired. Brown would wind his way through many battles, including Gettysburg, and was injured several times. He persevered. He was finally taken from the battlefield by Union troops on April 2, 1865, barely a week before the war ended, at the fall of Petersburg. He was released in July, returned to Anderson, and had a long and very successful career as a lawyer, mill operator, banker, and even served a term in the South Carolina legislature. Brown lived to the age of 88, dying in 1921. This biography of his war years was written by Brown's daughter, and his devotion to the Confederacy can be seen by the name he gave her – Varina Davis Brown, named after Jefferson Davis' wife. She was so named despite being born two years after the Civil War ended. $250.

Here is another Confederate soldier named Brown, even more obscure than the last. Philip E. Brown had come from the countryside to work as a hotel clerk in Richmond, then Petersburg, Virginia, when that state joined the rebellion. The next morning he volunteered. He recounts what happens next in his Reminiscences of the War 1861-1865, published in 1912. Now an elderly man, Brown recounts his time in service. His story is both ordinary and horrific. It was run-of-the-mill for what soldiers endured in that war. They were constantly on the move, exhausted, short on food, short of blankets. Then, they would face the enemy, bloody battles took place, and the fields were covered with the dead and wounded, the latter moaning in agony. It is a story repeated until finally it is Brown's turn to be wounded. Fortunately, his wound is in the arm. In retreat, he ends up reaching a group of Union soldiers, one of whom, remarkably, looks after him, brings food and water, and takes him to a Union surgeon. There, the surgeon treats him kindly while going through the arduous, and painful to Brown, task of removing a bullet embedded deeply in his arm. He is taken prisoner, sees more doctors who say his arm has to be amputated, but he evades them. Despite the pain in his swollen arm, he manages prison life well, and is fairly soon sent home in a prisoner exchange. The doctor at home questions why his arm was not amputated, and says it must be. Brown has to escape his own side's doctor this time, makes his way back to the hotel in Richmond where he had worked, finds a better doctor who can fix his arm, and lives out the remainder of the war as a hotel clerk once again. However, that does include the burning of Richmond and his hotel at the tail end of the war. Despite his trials, this Brown does not turn out to be an unreconstructed Confederate. He believes the Union has become better than ever and is glad to be part of it, his kind treatment by Union forces after being injured leaving a lasting impression. Item 47. $250.