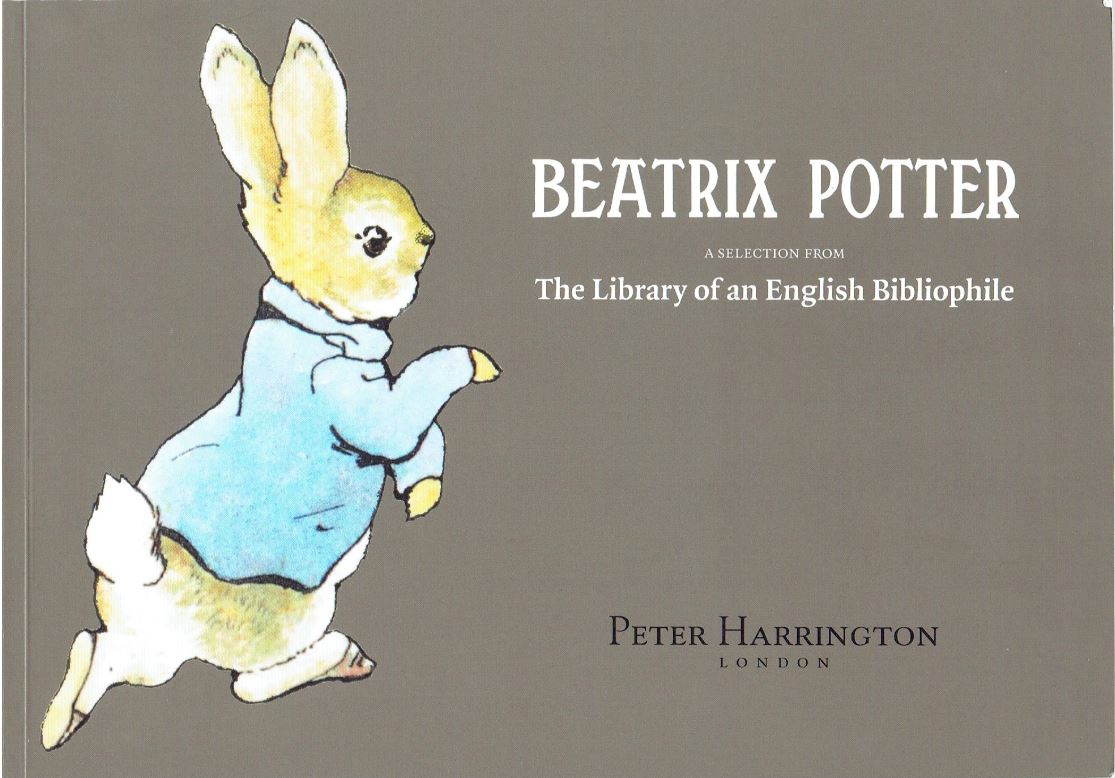 Peter Harrington has created a catalogue designed, quite literally, for the young at heart – Beatrix Potter. A Selection from the Library of an English Bibliophile. Ms. Potter will forever be linked to Peter Rabbit, the naughty bunny she created in a letter to entertain a friend's child. To her surprise, Peter "grew up" to be an institution. She went on to create many more anthropomorphic animal tales, her following among children in England and America wide and deep. Her truest fans know all of the rest, while everyone else knows Peter.

Despite her celebrity writer status, Ms. Potter was never a very public woman. Her father dominated much of her life. While adored by children, she had none of her own. She was not married until age 47, though she was first engaged at age 40 to her publisher, who sadly died before the wedding. If her parents controlled much of her life, Potter did control those of Peter and his friends. She was quite demanding about the details of her books, size, format, and such. These books, from start to finish, are very much Beatrix Potter. Here are a few of them.

Potter was both the writer and illustrator of her stories. She started out as an illustrator, and it is unlikely she ever would have achieved such success as a writer alone. It was her drawings that caught people's eye. As such, she created greeting cards and such featuring her drawings. The first book in which she participated was published in 1890, and she was the illustrator only for it. The book is A Happy Pair. It is a set of six poems written by Frederic Weatherly. Weatherly was mostly a song writer, and like Potter, he is by far best known for a single creation, in his case, Danny Boy. Potter was not hired specifically to illustrate this book. She sent her illustrations to a couple of publishers. The first returned them, the second, Hildesheimer & Faulkner, loved them, using them for this book and for Christmas cards, and immediately ordered more. The pair she has illustrated are humanized rabbits, looking remarkably like Peter and his family. This first Potter work is extremely rare. Item 1. Priced at £30,000 (British pounds, or approximately $40,015 in U.S. currency).

Here is the one you know Beatrix Potter for. Item 6 is a copy of the first edition, first impression, of the privately printed Peter Rabbit, published in December 1901. In 1893, Potter wrote a letter with illustrations to the five-year-old son of her governess from her youth. The child was frequently ill and she sought to cheer him up. In 1900, she thought the drawings might make the basis of a good story and wrote the boy back to see if he still had them. Fortunately he did, and sent them to her. Potter created her book, the Tale of Peter Rabbit. She wanted the book published in a smaller format than preferred at the time so that children could easily handle it. No publisher wanted her book under those conditions, and Potter was uncompromising in her demands. The result was she published it herself, 250 copies, some of which she sold, others she gave to friends. They liked it so much she printed a second impression, and with that, publisher Frederick Warne & Co. gave in to her demands. Item 6 is a copy of that private first edition in the first impression. £75,000 (US $99,920).

Item 7 is a second impression of the first edition of The Tale of Peter Rabbit, one with an inscription that reflects a lesser known part of Beatrix Potter's life. It reads, "For J. Squire, from Miss Potter. March 26, 1902." I don't know much about Mr. Squire other than, in her diary, Potter said she went "to ask him about dry-rot." Fascinating subject, no doubt! It turns out that Miss Potter was something of an amateur expert on fungi. Though quite knowledgeable, she was limited in her studies since, at the time, women were not permitted to seriously pursue science. Nonetheless, she learned enough to write a paper on the germination of fungi that was sufficiently expert that her uncle had it presented to the Linnean Society (she could not do so herself being a woman). £35,000 (US $46,618).

Peter may have been a naughty rabbit, but this one was bad, fierce bad. Item 34 is The Story of a Fierce Bad Rabbit. This rabbit didn't just steal from humans, he stole from other rabbits. Published in 1906, this story featured a different format. It was a fold-out panorama, unfolding from its wallet-like case to 14 pages of text and 14 of illustrations. It may have seemed like a clever idea, but booksellers hated it. People would unfold it in the store but struggle to fold it back up when finished. Three such panoramas were planned, but only two were published before the format was dropped. Both this story and the other were later printed in standard book format. This copy comes in a rare red variant binding. Most were in a green binding. Two copies in Warne's archives were in red, so perhaps this was an earlier trial binding rejected in favor of the green. £3,250 (US $4,334).

Potter wrote prolifically through 1913. After that, her production dropped off precipitously. She didn't publish again until 1917, and the gap between books, particularly new ones, expanded. Much had changed in her life. She had been buying up land in the countryside for several years, using the wealth from her books plus an inheritance from an uncle. In 1913, she finally married and moved to the country. The following year, the First World War started, and her dominant father died. She was focused on farming and her husband and his family. Meanwhile, her eyesight deteriorated, making illustration difficult. Most of what followed either used earlier books or were stories she had written years before but never had published. She died in 1943, after 30 years of happy married life. Her final book was published years later. Item 87 is The Sly Old Cat, published in 1971. It was written in 1906, intended to be the third panorama book. It had been retrieved from the mothballs in 1916 by Warne, with Potter suggesting another illustrator to complete her sketches because of her weakened sight. It didn't happen until this first edition was finally published over half a century later, using Potter's original sketches. While this was her last book, it should be noted that a more recently discovered unpublished Potter story is scheduled to be published this month, illustrated by another. £100 (US $133).