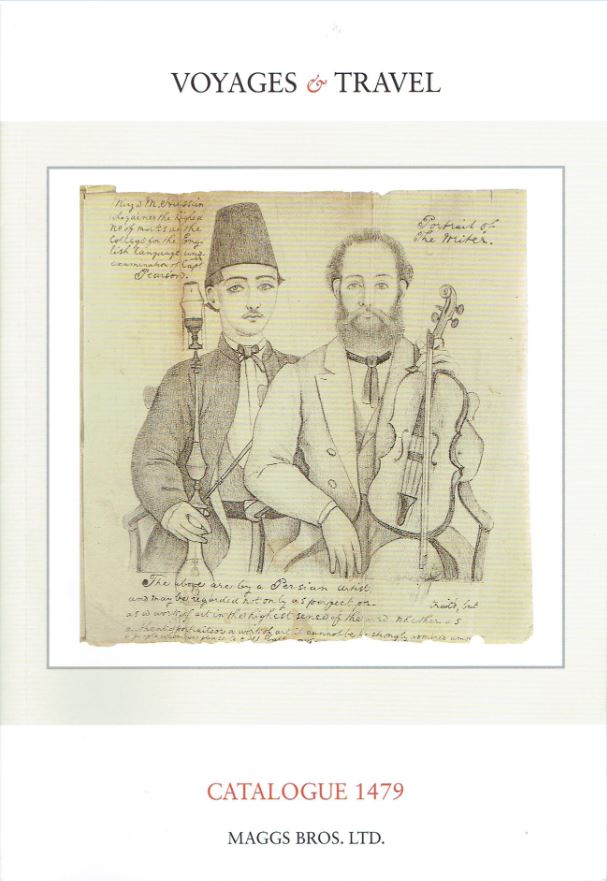 Maggs Bros. Ltd. has released their Catalogue 1479 Voyages & Travel. The journeys are all from long ago, their destinations as diverse as the rest of the world, outside of England. Maggs has neatly divided the catalogue into sections based on those destinations, making it easy to find the books of greatest personal interest. Here are the finish lines:

Egypt, the Near East & Middle East

Slavery is not quite a destination in the traditional sense, but the works offered pertained primarily to the slave trade, some of the most horrific of voyages humans were ever forced to endure. Here are a few of the books in this latest selection from Maggs.

Since we only have to read these travel books, not participate in the trips, we can begin with one that was absolutely horrible. Perhaps the title is an exaggeration, but if so, not by much. Item 75 is The Worst Journey in the World. Antarctic 1910-1913. The author was Apsley Cherry-Gerrard, a young man with a large inheritance who managed to convince Robert Falcon Scott to take him along on his journey to be the first to reach the South Pole. Cherry-Garrard was appointed assistant zoologist. He was not one of those who made the final attack on the South Pole. He was assigned to a supply station along the way. Scott and two others made the final leg. They reached the Pole on January 17, 1912, only to discover they were not the first. Norwegian Roald Amundsen has beaten them by five weeks. Scott and his men never made it back, succumbing to the extreme conditions. Cherry-Garrard would be one of those who located their bodies, though it took almost a year before they were able to do so. But, that was not the worst part of the worst journey for Cherry-Gerrard. Prior to Scott's attempt to reach the Pole, he was sent along with two others to collect emperor penguin eggs in his role as assistant zoologist. They too experienced extreme storms and cold, along with difficult conditions for dragging their sledges. The other two died as a result of the terrible conditions, only Cherry-Gerrard making it back to camp to tell about it. This copy of the Worst Journey is inscribed by Edith Cherry Garrard, most likely his mother. Priced at £3,800 (British pounds, or about $5,008 U.S. dollars).

This book describes some very different journeys, the one element they had in common with that of Cherry-Garrard being that they were comparably terrible. Item 81 is An Account of the Slave Trade on the Coast of Africa, by Alexander Falconbridge, published in 1788. Falconbridge had served as surgeon on four slave transports. In 1787, he could take no more and exited the slave trade. Returning to Bristol, he was discovered by Thomas Clarkson, one of England's leading abolitionists. Falconbridge not only had witnessed the horrors of the trade, Clarkson found he was willing to talk about them. Falconbridge gave testimony to the Privy Council, and then put down his experiences on a slaver in this book. The cruelties and the abominable conditions on the ship were described by the author. He writes of the decks on which they were held, their floors covered in blood and vomit from the prisoners. He wrote that it "resembled a slaughter-house. It is not in the power of human imagination, to picture itself a situation more dreadful and disgusting." He writes about the slaves' diet and medical condition. He explains that sailors could have intercourse with slave women if they consented, and one can only imagine what methods were used to gain consent. Officers did not even need consent, they being "permitted to indulge their passions among them at pleasure, and sometimes are guilty of such brutal excesses, as disgrace human nature." Falconbridge also notes that many of the sailors became terribly diseased and died without ever making it back home. £1,250 (US $1,645).

Here is a book that makes you wonder why anyone should have produced such a book. Item 42 is Voyage Autour du Monde sans la Lettre a par Jacques Arago, published in 1853. That title translates to "voyage around the world without the letter 'a' by Jacques Arago." Arago meant that quite literally. The words employed in the title notwithstanding, Arago wrote the book without using the letter "a." Try that and see how easy it is! Arago was not a mere crackpot. He was the official artist on Freycinet's circumnavigation on the Uranie. He participated in writing the official account of the voyage along with his own strange one. It occasionally required some oddities, such as attributing the discovery of the Society Islands to Cook rather than Wallis since Cook's name didn't have an "a." Arago later wrote some humorous dining guides, so presumably his sense of humor explains this bizarre book. He also admitted on his deathbed that he cheated, using the letter "a" once, in the word "serait" (would be) on page 27. £2,500 (US $3,290).

This book is extremely rare, having never been published. Some small number were put together, without a title page, with but four copies known to survive. Printed in 1839, the book is Reminiscences, by George William Manby. Manby took part in several sea excursions, and these, along with some personal events, provide part of the narrative. Manby at one point was shot in the head by his wife's lover, perhaps some of his distinctive traits being the result of the effect on his brain. Mostly, Manby was an inventor, and much of his focus is on one of his inventions, the result of another traumatic experience in his life. In 1807, he witnessed a ship go down in a storm, barely 50 yards offshore, watching helplessly as hundreds drowned. In response, he developed what he called a "System for Preserving the Lives of Shipwrecked Persons." It was better known as the "Manby Mortar." His device would fire a thin rope into the rigging of a wrecked ship, which in turn could be used to pull a thicker rope to the boat. The thicker rope could be used to pull the ship to shore. That may sound like a strange device, but several stations along the English coast were set up and it has been estimated that 1,000 lives were saved by the Manby Mortar. Item 24. £6,500 (US $8,541).