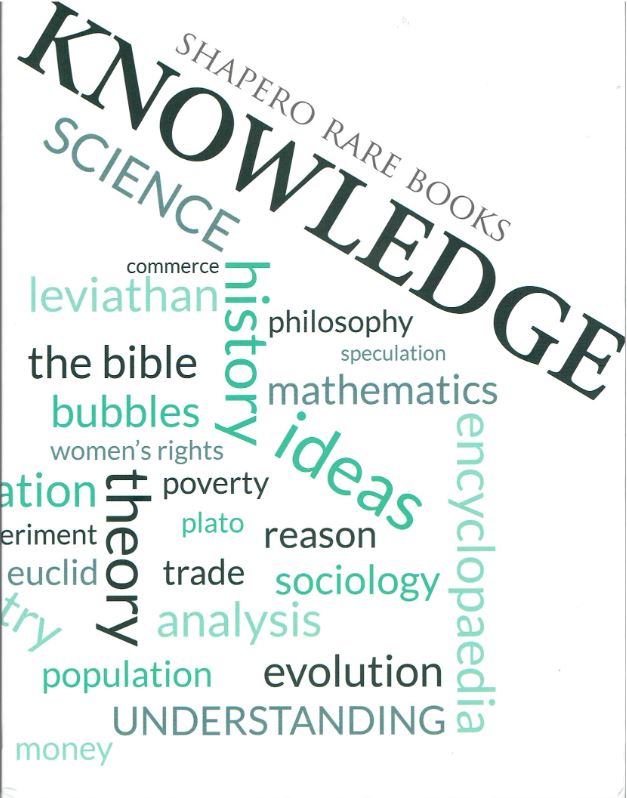 Shapero Rare Books has issued a catalogue of Four Centuries of Knowledge 1525-1891. There is no light reading here, no fiction, at least not intentionally so. These books are for thinkers, containing science, math, philosophy and explorations for starters. There are even a couple of encyclopedias for those who want to know everything. Some of the intellectual topics covered can be seen printed on the catalogue's cover. I'm not sure how "bubbles" fits in there, but the rest are quite thought-provoking. Maybe investment bubbles? Here are a few of these works from the age of reason and science.

We begin with a book that would prove to be of monumental importance to scientific discoveries of the 19th century, though it was not entirely obvious at the time. Charles Lyell started his career as a lawyer, but his real interest was geology. He studied it thoroughly and from 1830-1833 published the volumes of his groundbreaking conclusions, Principles of Geology, being an attempt to explain the former of the Earth's surface, by reference to causes now in operation. Lyell studied such geologic processes as erosion and sedimentation, shifts in the Earth crust, and such and came to a conclusion perhaps implied by the title. He concluded the pace at which such events occurred in the past was the same as it is today. This was of major import as those processes are slow today, and yet most people back then believed the Biblical account, which placed the Earth's age at around 5,000 years. Events seen in the geologic record, if gradual like today rather than catastrophic, required the Earth be much older than 5,000 years. Lyell then went on to look at living organisms, and concluded extinction of species was also a gradual process, resulting from changes in the environment, not catastrophic events. He also believed the appearance of new species must also be a gradual occurrence, though he could not explain how this happened. However, off at sea during this time, to study life and geology in Patagonia, was Charles Darwin, who read Lyell's book. That would set the wheels spinning. Darwin's theory of evolution by natural selection, developed after he returned to England, is a gradual process, requiring Earth be much older than a literal interpretation of the Bible. Armed with the knowledge that Earth was indeed very old, the missing piece to enable the development of species by evolution was in his hands. Item 46. Priced at £10,000 (British pounds, or approximately $13,171 U.S. dollars).

Rene Descartes is widely regarded as the starting point of western philosophy. If few today know very much about him, he is still known for one famous quote - "I think, therefore I am." Descartes believed he needed to throw out the philosophies that preceded him, including church doctrine, and start from a new and well-reasoned point. That point needed to be a universal, unassailable truth. To him, the thinking-being connection was it. Descartes distrusted his senses, believing that only reason could determine ultimate truths. While his thoughts became the foundation for modern philosophy, and the rationalists who came after him followed Descartes' model, others would rebel, turning to senses, or more exactly, what was learned through observation, the scientific method, as being the way to understand the world. Item 14 is Descartes' Discours de la methode pour bien conduire sa raison, & chercher la verité dans les sciences, published in 1637. £110,000 (US $144,946).

Next up is a work of political philosophy, a treatise on rights for which much progress has been made, but with many gaps still to fill. Item 39 is A Vindication of the Rights of Woman... by Mary Wollstonecraft. She had started out to write about the rights of man, "man" more its generic meaning rather than gender specific, but her attention turned to those rights denied because of gender. While Wollstonecraft's advocacy of equal rights for women would not be radical today, her book was published in 1792, and was very controversial at the time. Men were in no hurry to abandon their privilege, evidenced by how long it has taken even to reach where we are today. £8,500 (US $11,207).

Here is one of those encyclopedias, and the most influential of all. The project started as a plan to translate an earlier encyclopedia to French, but Denis Diderot, its primary editor along with Jean D'Alembert, convinced the publisher to undertake a much greater project. For the next 30 years, volumes of the Encyclopedie were published, running from 1751-1780. Diderot wrote many articles, but 35 volumes requires many writers. He convinced some of the best of the French Enlightenment to contribute, including Voltaire, Rousseau, Montesquieu, Condorcet, and Buffon. It covered science, industry, just about everything, as an encyclopedia should. However, what is most notable is its promotion of Enlightenment ideals, a democratic government meant to serve its people, rather than the other way around. Naturally, that made it controversial and at times it was banned. Item 29. £55,000 (US $72,814).

Richard Mulcaster was one of the earliest leaders in English education. In 1561, he was appointed as the first headmaster of the Merchant Taylors' School, still in existence today. In 1581, he published Positions wherein those primitive circumstances be examined...which are necessary for the training of children, either for skill in their booke, or health in their bodies. Mulcaster was noted for his reverence of education and was also an advocate for learning in English, at a time when most serious study was conducted in Latin. He even put together a long list of English words, earning a reputation as a pioneering lexicographer, though he did not offer definitions. It was good more for spelling. However, what is perhaps most lasting from this book is the "or health in their bodies" part of the title. Mulcaster strongly believed in the value of physical education. He felt physical and mental health were closely aligned. He promotes such sports as "wrastling," "fensing," running, swimming, and riding. Of greatest importance, however, was a word he coined to describe a street game for which he provided the foundation for an organized team sport – "footeball." He was first to use that name for the game we now know as football (his game featured use primarily of the feet – what Americans call "soccer" rather than American football). Item 4. £25,000 (US $33,129).