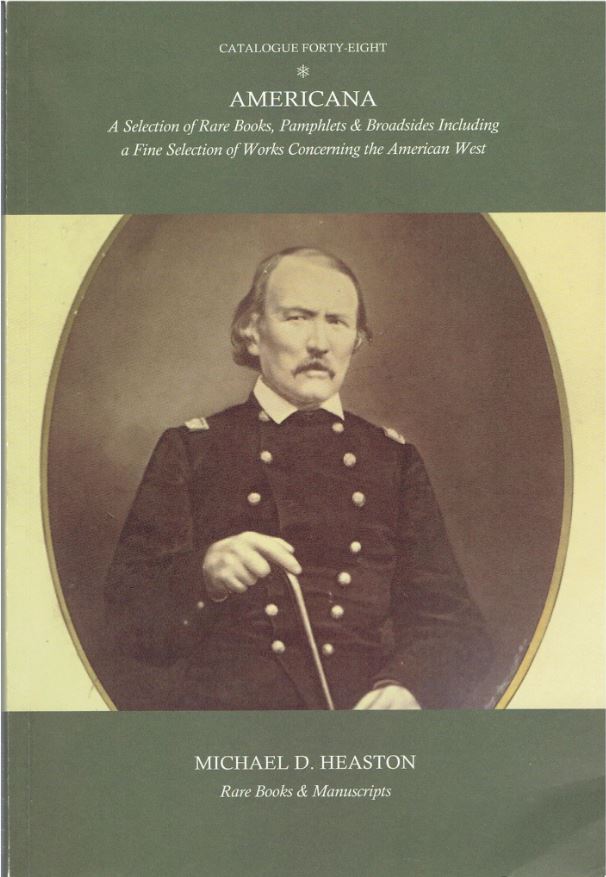 Americana from Michael Heaston, with Kit Carson on the cover.

Michael D. Heaston Rare Books & Manuscripts has issued a catalogue that will appeal to collectors of a wide range of Americana, particularly the American West: Americana. A Selection of Rare Books, Pamphlets & Broadsides Including a Fine Selection of Works Concerning the American West. There are some things that will appeal to those looking for the obscure, such as personal archives of unknown people, or the western book written by an author described as a "senile braggart." Then next, you may find a rare and very important piece of American history. They are all here together in a fascinating look at American history. Here are a few samples.

We begin with one of those items of great significance. There are many names from the Old West that are still familiar today, cowboys, gunfighters, buffalo hunters and the like. Those were from the second half of the 19th century. Fewer names are remembered from the even older West, the first half of that century. Here is the best known of them all – Kit Carson. The early days were ones of exploration and living off the land, rather than settling it. The first to explore were the trappers, beaver pelts being in high demand for fashion hats in Europe. At the age of 17, Kit Carson ran away from home and headed west. He hooked up with fur traders, and spent most of his time from 1826-1840 as a mountain man, trapping, trading, and at times fighting Indians. Carson could be both brutal and uncaring in his relations with the country's natives, and at other times friendly and concerned (he twice married Indian women). By 1840, fashions in Europe had changed, and the beaver had been to a large extent hunted out anyway. Carson turned to hunting to supply food for soldiers. In 1842, he got his biggest break, the one that turned this unknown trapper/hunter into a household name across America. He was hired by John C. Fremont as a guide on his western explorations. Fremont undertook three expeditions, the final one ending up with his securing California for the United States during the Mexican War. In his accounts, Fremont wrote up Carson's exploits. He became an American hero, the subject of numerous dime novels. He would next be appointed an Indian Agent, and come the Civil War, he joined the Union Army and received a command, fighting in New Mexico (yes, there were Civil War battles as far west as New Mexico). After the war, he was placed in charge of a fort in Colorado, but that lasted only briefly. Carson's health was declining and he died in 1868. That leads us to item 25, a remarkable document. It is the official conferring of the rank of Brigadier General by Brevet on Christopher Carson. It was made on April 9, 1866, by President Andrew Johnson. Johnson's signature was made via his rubber stamp, but that of Secretary of War Edwin Stanton was made by hand. Carson's appointment is accompanied by a photograph of him, an enlargement of one by Matthew Brady by G. Grelling of Detroit. The picture was both taken and printed sometime in the early 1860's. That photograph of Carson, likely at the age of 53-55, is seen on the cover of this catalogue. The appointment and photograph are priced at $35,000.

One of the most collectible of subjects is Mormon history. This is a major document in that history, a turning point in the life of the community. Driven by unfriendly neighbors in Missouri to Nauvoo, Illinois, the welcome was no friendlier there. In 1844, church founder Joseph Smith and his brother were killed by a mob, and by 1846, the Mormon community found the local hostility to be untenable. New leader Brigham Young made a decision of monumental consequence to the community. Item 12 is the first printing of the announcement, a broadside headed A Circular of the High Council. To the Members of the Church of Jesus Christ of Latter Day Saints, published on January 20, 1846. In it, the Council of Twelve announces for the first time that they will all move west. It had previously been announced that they would leave, but no specificity of where they would go was given. In this proclamation, they reveal, "Our pioneers are instructed to proceed West until they find a good place to make a crop, in some good valley in the neighborhood of the Rocky Mountains, where they will infringe on no one, and be not likely to be infringed upon." This is one of only four copies of this proclamation known. Item 12. $20,000.

America has seen three notable declarations of independence. There was, of course, the one in 1776, the Texas Declaration, and then this one. Item 19 is a broadside declaration headed En El Puerto de Monterrey de la Alta California, published in 1836. This is the California Declaration of Independence. The revolution of sorts was spearheaded by Juan Alvarado, one of the local officials displeased by interference in their affairs by officials in Mexico City. In time, the disputes were resolved and Alvarado officially appointed as Governor, but the desire for independence would arise again a decade later with the Bear Flag Revolt. This time, with immigrants from the United States rather than from Mexico leading the way, with the force of the U. S. Army in the Mexican War behind them, California would be separated from Mexico, to become a territory and then a state of the U. S. A. This copy of the extremely rare document was once part of the great Americana collection of Thomas Streeter. $65,000.

The Mexican government was struggling with both rebellious American settlers and finances in their northern lands in this era. Item 149 is a document from the Ministerio De Hacienda, adopted in 1837, printed in 1839. It provides security for loans from London bankers. In it, the Mexican government agrees to secure debts with lands in Texas, New Mexico, California, Sonora, and Chihuahua. Each pound of debt is secured by four acres of land, with an extra 100 million acres held as security. It is interesting that Texas lands are included as security as by 1837, Texas had secured its independence from Mexico, even if the latter had attempted to go back on Santa Anna's granting of independence, obtained under the barrel of a gun. $850.

For a look at life in the West, particularly Montana, during the 19th century, here is an account: Thirty-One Years on the Plains and in the Mountains; Or, the Last Voice from the Plains. Authentic Records of a Lifetime of Hunting, Scouting, and Indian Fighting, by Captain Wm. F. Drannan, who went to the Plains when 15 years old, published in 1899. Be careful about taking everything Drannan says too literally. He evidently had a different meaning for the word "authentic" than do most of us. This is the book Howes described in his USiana as, "Reminiscences—chiefly of adventures that never happened—by a senile braggart." In a later catalogue, Howes elaborated, "Old Cap Drannan was, he claims, associated with Fremont, Carson, Beckwith and Bridges and served as Chief of Scouts under Crook, Connor and Elliot. To write out all of his deeds and enumerate all the Redskins he slaughtered would fill a catalog page, so it can only be said here that if truth is stranger than fiction, this narrative is true." Still, Howes gave it a rating of "aa," not for accuracy, but rarity, meaning it is an uncommon title. Item 43. $375.