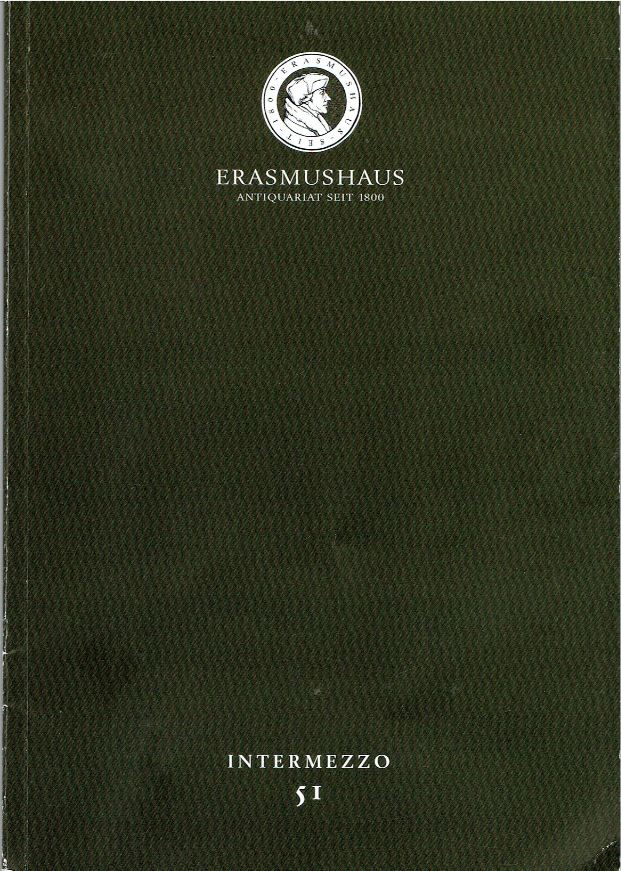 Erasmushaus recently issued a new catalogue, Intermezzo 51. Erasmushaus specializes in antiquarian books. They have been in business since 1800 and most of the books they offer could have been sold as being old even then. Topics vary and so do the languages of these texts. European languages are most common, especially German, French, and as so many items are very old, Latin. However, you will also find some books that are in English. Being located in Basel, Switzerland, it is something of a guess which language will be used for the catalogue. This time it is in German. For English speakers, they note that they provide English descriptions on request. Here are a few of the items offered in this catalogue.

We begin with a classic book from the beginning of the machine age, Theatrum Machinarum Novum. This is a 1661 first edition of the masterpiece from the very inventive Georg Andreas Boeckler. There weren't a lot of things being done by machine in those days, but milling was one area that was employing new technology, and many of Boeckler's devices were intended for this field. There are mills, waterwheels, water pumps and windmills described. Still, his devices go beyond milling to such things as fire engines, knife sharpeners, a roasting pit, and water fountains. Some machines were powered by water, others by animals and humans. Boeckler not only describes the machines, but provides illustrations. There are 154 engraved plates. In some cases, the machines were a bit ahead of their time, but it was not fanciful equipment that Boeckler was brainstorming but practical machinery that could be employed at the time. Item 10. Priced at CHF 12,500 (Swiss francs, or approximately $13,066 U. S. dollars).

Next up is a work which was very much fanciful, a classic of fantasy that revealed deeper intentions than an ordinary work of the genre. Item 90 is Travels into Several remote Nations of the World. By Lemuel Gulliver, First a Surgeon, and then a Captain of several Ships. Of course, the alleged author, Lemuel Gulliver, was as fictional as everything else in the book. Nevertheless, being the lead character, the book is now commonly known as Gulliver's Travels, while the actual author was Jonathan Swift. Swift sent his protagonist to various far-off lands, a book written to sound similar to the travel books of its time, the heyday of distant explorations. However, as amazing as what real explorers discovered was, Gulliver's finds were totally fantastical. There were lands of giants and of dwarfs, Utopian societies in an era when people imagined Utopian ideals, perhaps because their own societies were so less than ideal. While this book is now generally read as a fantasy and a favorite of children, it was meant more as a look at society, Swift making fun of the Court. As such, it had to be clandestinely printed. Offered is a first edition from the first date of October 28, 1726. There are some complex issue points because of the way this first edition had to be printed which we leave to the experts. CHF 65,000 (US $67,814).

Next is another fantastical book, this one from the field of science fiction. It is also one of the newest books in the catalogue: Le voyage de l'Isabella au center de la terre (the voyage of the Isabella to the center of the earth). The author was Frenchman Leon Creux, his journey to the center of the earth published in 1922. As with all such journeys that are not immediately consumed by molten lava, this is fiction. An engineer by the name of Gare rides a cylindrical ship that is able to drill its way into the earth. There he finds a new cosmos, replete with its own stars and constellations. Creux was himself an inventor, gaining patents on a scroll compressor, a device that uses rotary motion to compress air. It does not appear that he was ever able to create a successful working model of his invention, though others developed similar devices many years later. Item 26. CHF 500 (US $522).

Here is another work of science fantasy, and it too comes from a man with some serious endeavors. Louis Guillaume de La Folie studied physics and chemistry, and while his name is not renown as a great scientist, he did apply his learnings to practical uses in industry. He developed a superior method of dying thread red, not exactly a Newtonian achievement but still a useful one. In recognition of his achievements, he was appointed an inspector for royal factories. Sadly, he died as a result of an accident while working on a chemical experiment while still in his 40's. Fortunately, five years earlier, in 1775, he published this fantasy, though based on scientific knowledge of the time: Le Philosophe sans Pretention... It is a story about a scientifically advanced civilization on Mercury that sends an explorer to earth. His spaceship is a wondrous combination of parts that runs on electricity, a force just beginning to be understood at this time and considered a wonder. It is forced to make a crash landing on earth, leaving him stranded on this planet. Item 68. CHF 11,800 (US $12,240).