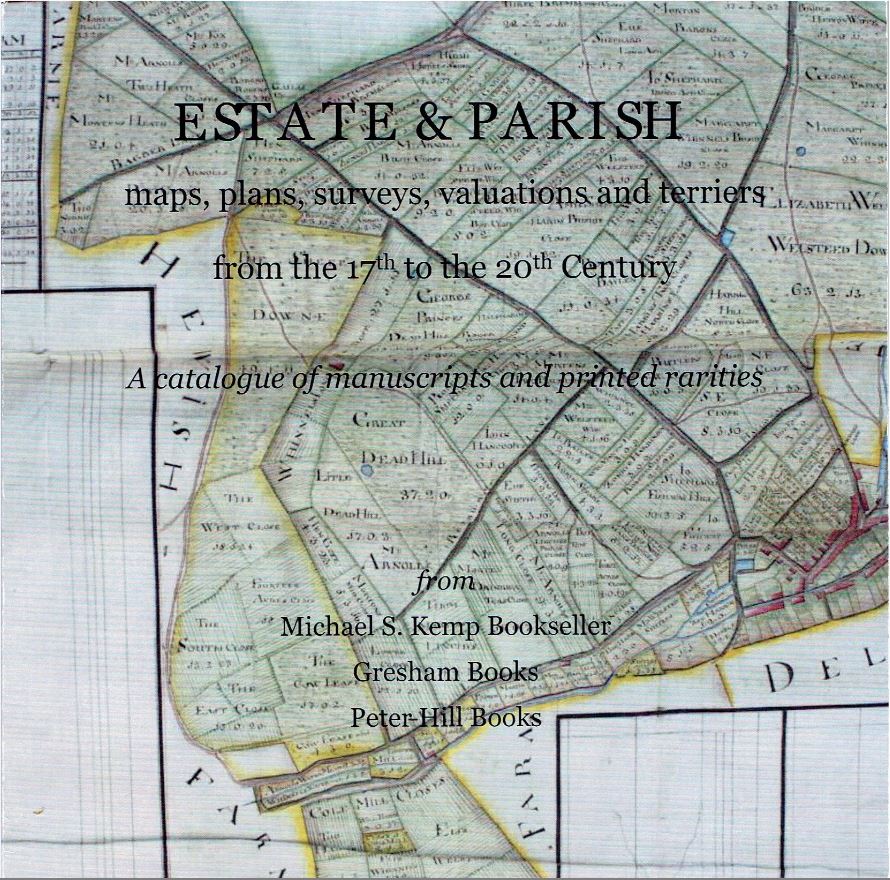 Estate and parish maps and plans.

Michael S. Kemp Bookseller, together with Gresham Books and Peter Hill Books, have combined to create a catalogue of very specific, unusual material. The title is Estate & Parish Maps, Plans, Surveys, Valuations, and Terriers from the 17th to the 20th Century. A Catalogue of Manuscripts and Printed Rarities. This contains primarily rural British material, which is why its title may seem odd to Americans. Why are they offering small dogs with things such as maps and surveys? It turns out "terriers" has another meaning in England I have not seen before. It refers to registers landowners kept, containing such information as land descriptions, a list of tenants, accounting of rents, and the like. This type of terrier fits better with maps and surveys than with a kennel.

The three partners made a joint purchase of a few early estate plans a few years back, which led them to think a catalogue of such material has not been seen in a very long time. The result was a continued pursuit for more such items and the production of a catalogue of them. Most of the items are in manuscript though there are some printed ones as well. Here are a few examples of the material you will find in this uncommon selection.

We begin with the Plans of Estates Belonging to William Witham Esq. 1796. This contains 13 hand-colored plans for Witham's estates in Yorkshire and Durham in the north of England. It also contains a list of the property and field names. While the surveyor's name is not given, it was likely one of the Fryer family, who were the notable surveyors in Durham at the time. Witham, of Cliff (or Cliffe), had inherited the estate from his father, which in turn likely went back several generations. However, he had no children. As a result, it all went to his niece, Eliza, who married Henry Silvertop. Silvertop thereby adopted the Witham name and coat of arms, becoming lord of the manor. Silvertop Witham is of some note for his research with fossils. It is likely that William Witham put these plans together in preparing his will and for the passing of his estate. He died six years later, in 1802. Item 7. Priced at £2,500 (British pounds, or roughly $3,671 in U. S. dollars). Note: Overseas buyers may now find better prices as these are pre-Brexit exchange rates.

Next up we have a set of plans for an estate on the other end of England, in Netherbury, Dorset. Item 24 displays the Cultivation of Hincknole Oates Farm in 1847. It was put together by a Mr. Ackerman, perhaps an overseer. It contains six field plans showing such things as crops, boundaries, fences and gates. Additionally, there are 19 pencil drawings of the farmhouse and the outbuildings. Among the outbuildings are stables, coach house, rickyard (hay storage), and bailiff's house (overseer). This may have been prepared for a new owner or tenant, or perhaps the manager of the extensive operation. £2,500 (US $3,671).

Rather than just admiring someone else's estate, here is a chance to purchase one of your own. Perhaps it is a bit late since this offer was made in 1850. Item 27 is a single sheet describing the Plan of Thorn House, and Estate, in Somersetshire. It was being offered "For Sale by Private Contract." You may contact Slade and Vining solicitors if interested, though they may be hard to find. They filed for bankruptcy in 1857. This sheet features an engraved image of the fine house along with a plan of the land. It notes that the house has "commanding views of the celebrated Montacute and Hamdon Hills." The booksellers note that it appears that the estate was owned by Charles Pearson, who was succeeded by his son Charles Knight Pearson, and a sale to someone outside the family was not completed until 1869. £100 (US $147).

The adjacent county of Hampshire is home to Portsmouth Harbor. Item 15 is a plan for that harbor, a pen and ink drawing with watercolors. It is headed Plan of Portsmouth Harbor with Sketches of the Adjacent Places Taken by the Masters Attendant in the Years 1784 and 1785. Revised and Corrected Shewing All Alterations Which Have Taken Place Since Those Periods. This update of the original plan was made circa 1820. The Master Attendant at the time was James Park, who served from the 1790's to most likely 1822 or 1823. £1,800 (US $2,639).

This town plan shows later markings and coloring reflecting a great tragedy. Item 18 is The Ground Plan of the Town and Environs of Collumpton From a Survey Made July 1831 (the preferred spelling for this Devon town today appears to be Cullompton). The survey by R. P. Davey has been marked to show which homes were insured, including those just for contents but not structures. Cullompton suffered a great fire in 1839, some 145 houses and other buildings (maybe more) destroyed. The key also shows which lots had "ruins from the late fire." Cullompton today has 8,500 residents and, according to Wikipedia, "features many low points such as flooding, poor waste management, poor communication, lack of community spirit, low police presence and high council tax." Is this objective or does some Wikipedia writer have a grudge against this town? £1,500 (US $2,203).

Orders and questions concerning this joint catalogue should addressed to Michael S. Kemp Bookseller. Kemp may be reached at +44 (0) 1795 663675 or orders@kempbooksellers.co.uk. The website is found at www.michaelkemp.co.uk.