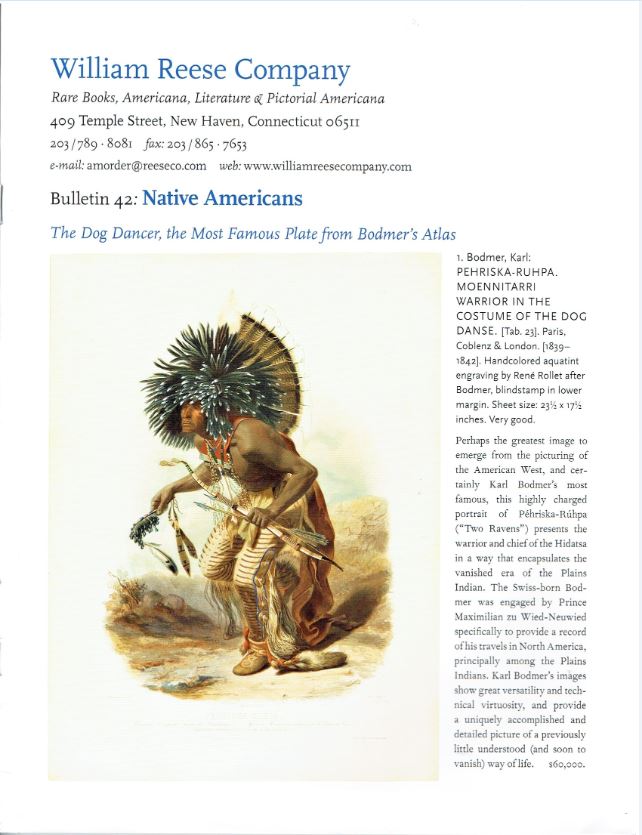 The William Reese Company has published their Bulletin 42: Native Americans. The words in that title won't be found in these books. They range from the 16th through the 19th century, and in those days, America's natives were known exclusively as "Indians." The moniker stuck for centuries, all because Columbus didn't know where he was. The material here begins with some of the earliest contacts with America's natives, particularly of those in North America. It continues through to the last days and last remnants of independence within their ancestral homeland. Here, now, are a few items from the days of transition, from rulers of the land to residents of the confines set out by others.

We begin with one of the earliest looks at North American natives. A group of French Huguenots attempted to start a settlement in Florida long before the Pilgrims. Under the direction of Jean Ribault and Rene Laudonniere, they at first settled along the east coast of Florida in 1564. They later moved up to today's South Carolina, but then returned to Florida. The situation deteriorated. They had to contend with Indians, with whom they at first enjoyed good relations, but that relationship turned sour. Then, the Spanish at St. Augustine, wary of French competition, set out to slaughter them all. Those who survived fled back to Europe. One of those who managed to make it out was Jacques Le Moyne. Le Moyne was the official artist and cartographer for the settlement, and it is most fortunate that he escaped as he was able to bring back some of the earliest images of the natives, unspoiled by European influences and still in control of their land. His original drawings were destroyed by the Spanish, but Le Moyne was able to reproduce them from memory. These would later make their way to travel publisher Theodor De Bry. Item 21 is the first German edition of De Bry's account, Der Ander Theyl, Der Newloch Erfvndenen Landt-Schafft Americae, published in 1591. This is a particularly notable copy as it is one of the rare ones to feature contemporary hand coloring. Priced at $300,000.

The image on the cover of this bulletin is a hand-colored engraving after Karl Bodmer of a Plains Indian from the 1830's. Bodmer accompanied German Prince Maximilian to America when the latter came here to learn about its natives and preserve their culture, at least on paper, before totally overrun by Europeans. Maximilian was the writer, while Bodmer was the artist, and his drawings of the American Indians are among the finest ever created. When Maximilian returned to Europe, he published his account (1839-1842) while Bodmer's drawings appeared in an accompanying atlas. Item 1 is what Reese notes is "the most famous plate from Bodmer's atlas." It is that of Pehriska-Ruhpa (Two Ravens), Moennitarri (Hidatsa) warrior and chief in the costume of the dog dance. Pehriska-Ruhpa graciously agreed to pose for Bodmer in his spectacular attire for participation in the Hidatsa ritual. $60,000.

Item 4 is another outstanding hand-colored engraving of Bodmer's artwork. This one was drawn inside the hut of Dipauch, an elder of the Mandans. Bodmer worked on it from December 1833 to April 1834. It depicts in great detail the home and several members of the family. Reese points out that this may be "the most accurate extant depiction, taken from life, of the domestic arrangements of the Plains Indians." $24,000.

Overlapping Maximilian and Bodmer's 1830's tour of the plains, and with similar aims, was that of George Catlin. Catlin also wanted to preserve images of traditional Indian life before they disappeared, and like Bodmer, he was an accomplished artist. In 1844, he published this account: Catlin's North American Indian Portfolio. Hunting Scenes and Amusements of the Rocky Mountains and Prairies of America. From Drawings and Notes of the Author, made during Eight Years' Travel amongst Forty-Eight of the Wildest and Most Remote Tribes of Savages in North America. It contains 20 pages of text, but far more significant are the 25 large hand-colored lithographic plates based on Catlin's exceptional paintings. Item 7. $110,000.

It is hard to have a catalogue of Indian material without some examples of the "Indian Captivity," books written by whites who were held in captivity for a period of time by some tribe. This next one is a great rarity. The Indian bibliography of Thomas Field describes it as "one of the rarest works in western history," and this was back in 1873! The title is An Account of the Remarkable Occurrences in the life and travels of Col. James Smith (Now a Citizen of Bourbon County, Kentucky,) during his captivity with the Indians, in the years 1755, 56, 57, 58, & 59... The book was given a "dd" rating for rarity in Howes' Usiana, the highest rating for scarcity, achieved by only a small number of books. The author of this account, which was published in 1799, Col. Smith, has been described as a brave, chivalric and generous frontiersman in the mold of Daniel Boone. He was captured working for Braddock's army building the trans-Allegheny road during the French and Indian War. He was adopted by the tribe and witnessed much about their culture and activities in war before managing an escape to Montreal in 1759. Item 36. $150,000.