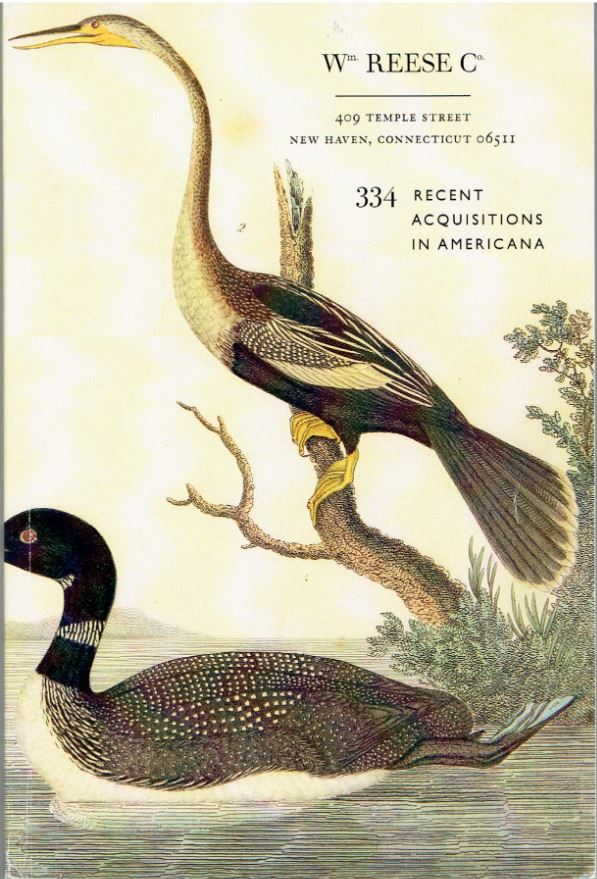 The William Reese Company has issued a catalogue of Recent Acquisitions in Americana, the 334th they have published. These are antiquarian works, overwhelmingly 17th-19th century. Naturally, they in some way relate to America, and they are items you have not seen in previous Reese catalogues, at least not the current copy. They cover different forms of works on paper, primarily books, but broadsides, letters, account books, and images amid various forms of ephemera. Americana collectors will want to check out the 169 items offered herein. These are a few.

If you were looking to head west in the early 19th century, this was the book you wanted to have: The Navigator: or the Traders' Useful Guide in Navigating the Monongahela, Allegheny, Ohio, and Mississippi Rivers, published by Zadok Cramer in Pittsburgh. This is an 1806 fifth edition, the first to contain navigation charts for the Mississippi. In 1806, the West was what is today the Midwest, few yet having ventured far beyond the banks of the Mississippi. This is a unique copy of the guide, one that was clearly used for its purpose as over three fly leaves are filled with an account of his journey by original owner John Seelye. By the end of 1807, he was living in Cape Girardeau, "Masoura" (evidently the natives have always pronounced their state that way). He writes that this book was "my guide to N. Orleans." For whatever reason, he proceeded down the White River toward the Mississippi at one point, but his horse misjudged the depth. He fell in. It was winter. Seelye writes that his "cloths [sic] were frozen as stiff as possible." He made it to a house, and fortunately, the owners weren't home as he had to shoot their vicious dogs to get inside. Locals later told him that the water is so clear "you may see the smallest fish at its bottom when the waters are at the highest." No wonder the horse was confused. Seelye thanks his "creator" that the homeowners weren't around to get revenge for his shooting their dogs, and for his "miraculous escape from the icy waters of the White River." Reese notes that the copy does have some dampstains on the preliminary pages, understandable considering his misadventure. Seelye notes that he paid 75 cents for the book. It has appreciated in value. Item 41. Priced at $10,000.

Benjamin Franklin was America's ultimate Renaissance Man. There wasn't much he didn't know or couldn't do. He was a great diplomat, printer, almanac publisher, and scientist. He was America's greatest scientist of the 18th century, even if we remember him more for his diplomatic efforts on behalf of his country during the Revolutionary War era. His most notable research came in the field of electricity, which he describes in his book Experiments and Observations on Electricity, made at Philadelphia in America... Best known is his discovery of the electrical nature of lightning, but he did far more in terms of experimenting in the field. Item 59 is the fourth and "by far the most desirable edition." The first had been published in 1751 without his knowledge. By the time of this edition, published in 1769, Franklin had collected all of his notes and correspondence with others concerning his findings to include in the book. $32,500.

A desire to split the union overwhelmingly came from those who were pro-slavery. They wished to separate from the non-slave states so as to preserve their "peculiar institution" from the onslaught of abolitionists. However, there were a few in the free states who wished to split so as no longer to be associated with slavery, or to have to enforce repugnant fugitive slave laws. Item 1 is a broadside from the Western Anti-Slavery Society, operating out of Salem, Ohio, circa 1850. It is headed Union with Freemen. No Union with Slaveholders, followed by the large, bold type announcing Anti-Slavery Meetings! The broadside continues, "Three million of your fellow beings are in chains – the Church and Government sustains this horrible system of oppression. Turn Out! And learn your duty to yourselves, the slave and God. Emancipation or Dissolution, and a Free Northern Republic!" While some abolitionists argued that the U. S. Constitution was actually an anti-slavery document, demanding its eventual abolition, this was one of a number of radical groups who believed the Constitution was pro-slavery, and since the South was unlikely to consent to an abolitionist amendment voluntarily, secession of the North was the only answer. $4,750.

Ten years later, the nation was about to break into a horrific, internecine war over the issue of slavery. You would never guess it from this bucolic collection of photographs from A. A. Turner, published in 1860: Villas on the Hudson. A Collection of Photo-Lithographs of Thirty-one Country Residences. This was the first American book to make widespread use of photo-lithography, which Reese notes did not come into common use for another two decades. The photographs were taken of large homes along the Hudson from the upper end of Manhattan Island to Dobbs Ferry, about 30 miles north. These were homes of the wealthy, usually summer residences of New Yorkers who could afford to spend extravagantly on their summer playgrounds. Each of the photographs has one or two colors applied by stencil. Item 150. $7,000.

Next is an 87-page printing of the Gettysburg Address. Huh? What is this, like three words to a page? No, it's not just that Gettysburg Address. Item 5 is the Address of Hon. Edward Everett, at the Consecration of the National Cemetery at Gettysburg, 19th November, 1863, with the Dedication Speech of President Lincoln, and the Other Exercises of the Occasion... Frankly, if it weren't for the inclusion of that short, secondary speech, you would be able to get this book for a couple of bucks. Senator Edward Everett gave a long-winded talk that lasted for over 1 ½ hours before Lincoln spoke his few words. Everett's speech was long ago forgotten, while Lincoln made one major mistake. The world did long remember what he said there. This 1864 Boston printing is the first authorized edition of the address, printed for the benefit of the cemetery monument fund. Item 55. $2,250.

Item 86 is Three Years in Canada: An Account of the Actual State of the Country in 1826-7-8, by John MacTaggart. MacTaggart was an engineer and a Scotsman who came to Canada to serve as clerk of the works on the construction of the Rideau Canal. The Rideau Canal runs from Ottawa to Kingston, at the eastern end of Lake Ontario. Its a distance of 160 miles, connecting with the Ottawa River at its northern terminus. This allowed for a water route from Montreal to Lake Ontario. The St. Lawrence River actually provides such a route, and more direct at that, but after the War of 1812, the British feared the Americans could easily shut off that river which forms the U. S. border in case of another war. The Rideau Canal provided an alternate route to ship arms. While his job was working on the canal, MacTaggart's book covers much more of his impressions about Canada, including its economic and social conditions, natural history, resources, etc. He returned to England in poor health, published his book in 1829, and died the following year. $900.