A Wide Variety of Material from Forest Books 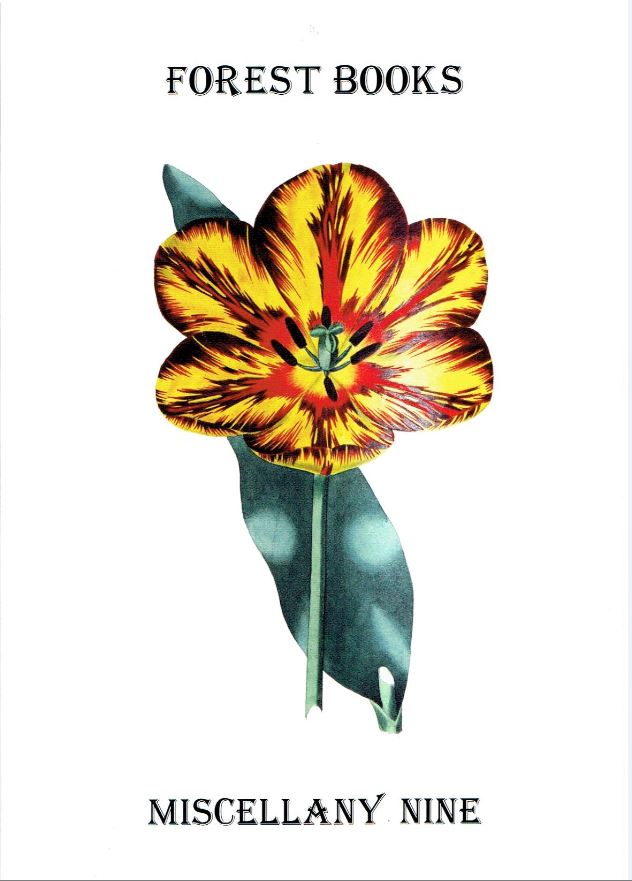 A wide variety of subjects.

Forest Books has issued Miscellany Nine - A Catalogue of Rare and Curious Books, Pamphlets & Printed Ephemera on a wide variety of subjects. They aren't just kidding about the wide variety. They specify agriculture, architecture, botany, children's books, crime & law, cookery, economics, education, English literature, farriery & equestrian, the fine arts, genealogy, geology, horticulture, Ireland, military & naval, natural history, photography, social studies, science & medicine, sporting books, technology, trade catalogues, travel & topography, etc. I'm not sure what's missing, but if it's not on this list, it's probably covered by "etc." Fiction might be the most obvious missing link, and yet there is a group of 18th century novels, the writers somewhat obscure and the books likely quite uncommon. Most of the books are English in origin and language, but there are exceptions. Here are a few samples.

We begin with one of the great English herbals. The author was John Parkinson, who had a couple of official titles under Kings Charles I and James I. He published two great works during his life. The first dealt with the cultivation of plants, and this, the second, is considered the greater of his books: Theatrum Botanicum: The Theater of Plants, or an Herball of Large Extent, published in 1640. It was of very large extent indeed, as Parkinson's aim was to create the most thorough English herbal ever published. It describes almost 4,000 plants, about 1,000 more than the previously largest compilation, Thomas Johnson's update of John Gerard's herbal. It was intended for use by apothecaries, as he had been the official apothecary to James I. Parkinson combined what he gathered from other published works, some unpublished works, and his own field research (quite literally in fields). Completing the work took many years, it not being published until Parkinson was 73 years old. Item 120. Priced at £3,750 (British pounds or approximately $5,408 in U.S. currency). Note: Overseas buyers may now find better prices as these are pre-Brexit exchange rates.

George Ensor was an Irish patriot and political writer of the early 19th century. He was also a strong voice on behalf of the poor, a man unafraid to make his sentiments known. Item 50 is a copy of his book published in 1823, The Poor and their Relief. How influential was he? A writer for the Quarterly Review expressed it this way: "His works have been ungratefully suffered to fall still-born from the press, neither read nor praised by the friends of reform; and it must be grievously mortifying to him to reflect, that while Cobbett and Wooler have formed the political creed of thousands, he has not yet been able to alienate from his sovereign, or from the constitution of his country, the affections of a single individual." While it does not appear that Ensor was the most influential man of his time, I suspect that he must have gotten this reviewer's goat as he does not appear to have been treated as joke either. He did write/publish around 20 books, and was friends with very influential people such as Jeremy Bentham and John Stuart Mill. Give the man his due. £295 (US $425).

Medical practices of 200 years ago seem creepy to us today, and few are creepier than this one, though the practice is still used to good effect in certain circumstances today. Item 127 is A Treatise on the Utility of Sangui-suction, or leech-bleeding in the treatment of a great variety of diseases... by Rees Price, published in 1822. Having one of those blood suckers attached to your skin is gross, and yet they are used in some cases today to draw off excess blood forming around a wound. They can target the blood that needs to be removed without making the patient lose what they need. However, Mr. Price saw much more extensive medical uses for leeches. They were in something of a medical vogue in the early 19th century. Those were the days when bloodletting was something of a cure-all, and for people like Price, leeches performed the numerous types of cures believed accomplished by bleeding, but in a more controlled, less dangerous manner. £95 (US $136).

Mary Ann Dixon of Godmanchester, Cambridgeshire, married Thomas Weems. It was a terrible mistake for both. They quarreled, he left, and went to seek employment in Essex. About ten days later, he returned. Weems told his wife he found lucrative employment and wanted her to come with him. He promised he would behave well in the future, so she reluctantly agreed. Weems had other thoughts in mind. On the way, he brutally killed his wife. She evidently bravely resisted, but he broke several of her limbs, her neck, and used her garter to strangle her. Apparently, Mr. Weems wished to marry another, and this was his way of dealing with past obligations. Item 20 is A Full Account of a most Atrocious Murder, Committed on Friday, May 7th, 1819, a single sheet description of the events. Exactly two months later, Weems was executed for the crime. Mary's headstone contains a long recitation of her marriage and subsequent killing by her husband, that closes, "But marks the sinner with unerring Eye / The suffering Victim hears and makes the Guilty die." £195 (US $281).

Mary Weems could have used this book: The Art of Boxing: With a statement of the transactions that have passed between Mr. Humphreys and myself since our battle at Odiham, published in 1789. The writer was Daniel Mendoza, probably the most notable fighter of his era. Mendoza was a relatively small man, and being a Jew, had to overcome great antisemitism. To deal with the situation, Mendoza developed a style of scientific boxing. Rather than just standing in front of an opponent throwing punches until one fell and could not get back up, Mendoza developed defensive postures, ducking, weaving, sidestepping punches. It proved to be most effective. As for his transaction with "Mr. Humphreys" (Richard Humphries) in Odiham, Humphries won that controversial match in 1788. One of his seconds deflected a Mendoza punch when he appeared to be finishing off his opponent. Humphries recovered and went on to knock out Mendoza (there were no decisions back then – the fighters fought until one was knocked out or gave up). The invective flowed between the two, leading to a highly anticipated rematch later in 1789. This time, Mendoza hammered his opponent into submission, and did so again the following year in a third match. Mendoza went on to be the English champion from 1792-1795. Item 13. £4,500 (US $6,484).