Travel and Exploration from Peter Harrington 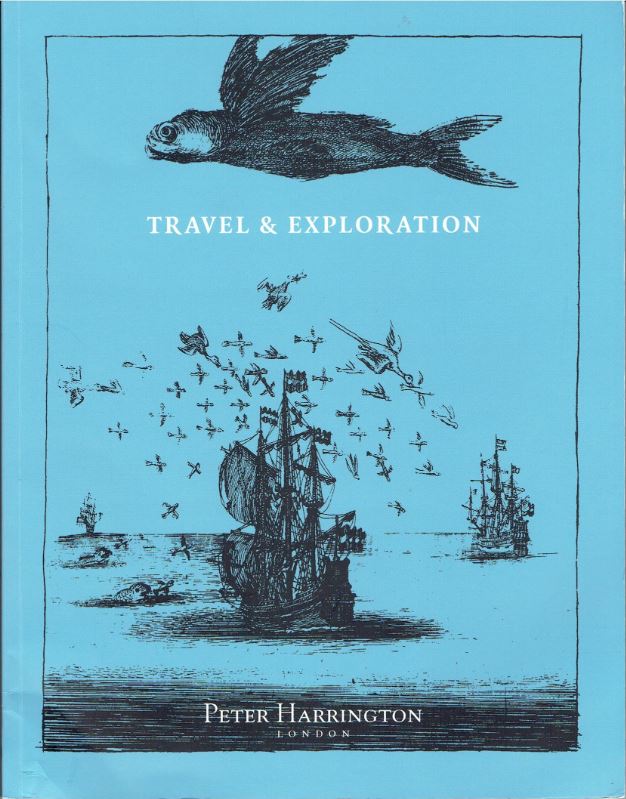 Peter Harrington's latest catalogue targets the field of Travel & Exploration. It covers both the obvious names in the field, such as Cook and Burton, along with many not so well known. While England was the starting point of many of these explorers, other nations are well represented too. Some were intended to be explorations, while others resulted from more immediate concerns, such as fighting wars. Harrington presents a collection of over 200 books, offering many choices for those interested in long ago travels. Here are a few.

We begin with not the oldest book in this catalogue, but the oldest journey. Item 13 is The Voyage of Nearchus from the Indus to the Euphrates... taken from Arrian's ancient account and edited by William Vincent, published in 1797. Nearchus' voyage actually occurred a couple of millennia before this first English edition of his travels was published. Nearchus was the equivalent of a high ranking admiral under Alexander the Great. While Alexander was pushing into India, he sent Nearchus down the Indus River to explore. He entered the Arabian Sea, headed west, and into the Persian Gulf, ascending the Tigris and Euphrates. Nearchus in effect discovered the Arabian Peninsula for Greece, and heard of the Omani Emporium. When this message got to Alexander, he ordered Nearchus to circumnavigate the Arabian Peninsula, but Alexander died before this mission could be undertaken. Priced at £2,500 (British pounds or roughly $3,620 U.S. dollars). Note: Overseas buyers may now find better prices as these are pre-Brexit exchange rates.

Captain James Cook brought back much new knowledge of the Pacific from his three voyages, but here is some information that was not used in the best of ways. He had landed at Botany Bay in Australia, a place that showed promise for settlement. And settle the British did, but not in the way Cook might have imagined. In 1779, the year Cook died on his third voyage, the House of Commons was discussing a problem back home. Their prisons were overcrowded, and the hulks in the Thames that were used as jails were in deplorable shape. There was no obvious answer other than executing more people for petty crimes, not exactly a good alternative. They needed someplace to send prisoners, far away where it was unlikely they would be able to escape and return home. They had used their American colonies at times for this purpose, but with the colonists acting all uppity in 1779, that was not an option. Ah ha. Australia! Item 16 is the Report from the Committee... That there be laid before this House, an Account of Persons convicted of Felonies or Misdemeanours, and now under Sentence of Imprisonment, in the Gaols and Houses of Correction... published in 1779. Joseph Banks, the naturalist on Cook's second voyage, when asked where was the most suitable place to send criminals, answered that Botany Bay would be an ideal location. Within a decade, England would be loading up ships with people convicted of crimes large and small, and shipping them off to Australia. This copy is inscribed by Sir Charles Bunbury, the committee chairman. £9,750 (US $14,121).

This book provides an account of what may well be the most important scientific expedition of them all. It didn't seem so at the time. It consisted of two journeys to Patagonia. The first, from 1826-1830, was commanded by Philip Parker King. The second, from 1831-1836, was commanded by Robert Fitzroy. Their account, three volumes and an appendix, was published in 1839 under the title Narrative of the Surveying Voyages of His Majesty's Ships Adventure and Beagle... King wrote the first volume, Fitzroy the second. Oh, the third was written by the naturalist on board the Beagle on the second voyage – Charles Darwin. Darwin observed flora and fauna on the South American mainland and offshore islands, as well as fossils, and noted similarities and differences between them. He did not express any earth-shattering conclusions about what he saw for another twenty years, but at some point, he put two and two together and came up with a theory to explain it – evolution by means of natural selection. Item 46. £87,500 (US $126,726).

Next is the product of one of the more thorough investigations ever. In 1798, Napoleon, still a general, not yet an emperor, undertook a mission to Egypt. His mission was twofold – control the land, and disrupt British trade with Asia. Since Napoleon planned on controlling the country, he figured it was important for France to fully understand the land. So, he took a large coterie of scientists, artists, historians, antiquarians, and the like along with him. They commenced work on this enormous report, Description de l'Egypte. The leader of this part of the mission was Vivant Denon, founder of modern Egyptology and later first director of the Louvre. Among the mission's many discoveries was the Rosetta Stone. However, things did not go as planned for Napoleon. Internal rebellions, attacks from the Turks, confrontations with the British, and disease all conspired to make Napoleon's situation tenuous. He hightailed it back to France, where his military leadership would prove much more successful... for a time. Meanwhile, work continued on the account after the participants returned, and the information was so valuable Napoleon wanted the report printed anyway, which was accomplished over several years, beginning in 1809. This set has been bound in 26 volumes. Item 37. £225,000 (US $325,829).

John Heygate was a baronet and a writer, though, at least according to Wikipedia, that is not what he is best known for. Rather, it says he is best remembered for having an affair with the wife of the more notable author, Evelyn Waugh. The marriage disintegrated, Heygate married the former Mrs. Waugh, only to have that marriage end in a divorce a few years later too. Oh well, at least he is remembered for something. And, to a lesser extent, he is remembered for Motor Tramp, published in 1935. Heygate drove around Europe in the early 1930's in his MG, and wrote about his adventures. However, this is not a typical travelogue. He visited Germany twice during the period, both just before and just after Hitler came to power. Heygate had very far right political views and was sympathetic to the Nazis. That is not to say he had no reservations, tempering his tendencies to the militaristic, nationalistic enthusiasm that excited him with his innate British reserve. Still, it is hard to imagine anyone not being repulsed by what he saw. Heygate did serve with the British Army during the war, so perhaps his views evolved as Europe devolved. Item 76. £875 (US $1,267).