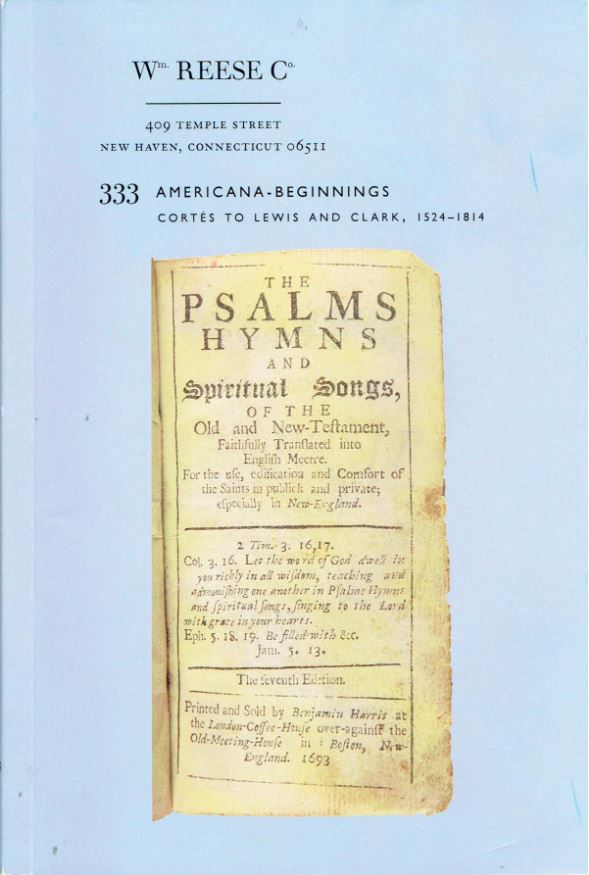 The Bay Psalm Book on the cover of William Reese's Americana – Beginnings.

The William Reese Company has issued a catalogue of Americana – Beginnings. Cortes to Lewis and Clark, 1524-1814. Everything in here is exceptional. These are truly foundational items in American history. These books and related paper are not for the fainthearted collector. They will require a significant budget, but for those so fortunate, with an interest in Americana, this catalogue is a must. For others, it is still a fascinating read, filled with history lessons, and perhaps something to aspire to one day as a collector. Here are a few examples.

We begin where Reese begins, with the first Latin edition of Hernan Cortes' second letter. If you think his first letter would be better, you are right, but that letter has been lost to history. This is as original as it gets. In his letter, Cortes describes his conquest of Mexico, especially his journey to Tenochtitlan, today part of Mexico City. He writes about the spectacular city he found, its buildings, its institutions, and the people who inhabited it. He also describes his battle against forces of his old boss and rival Velazquez. It was in this letter, composed on October 30, 1520, that Cortes gave the land its name of New Spain. Sadly, Cortes not only discovered the Aztec empire, he also destroyed it, hungry for its riches. Cortes letter was first published in 1522, this first Latin edition coming in 1524. As is commonly the case, it is bound with Peter Martyr's De Rebus... also published in 1524. This book is a description of recently discovered islands in the West Indies. Item 1. Priced at $40,000.

Next up is the best source for information about New England prior to the arrival of the Pilgrims. Item 8 is John Smith's A Description of New England: Or the Observations, and Discoveries, of Captain John Smith... published in 1616. It was Smith's book that provided a guide for the Pilgrims looking to settle in the area. Smith described Plymouth as, "an excellent good harbour, good lands, and no want of anything but industrious people." The Indians probably would not have appreciated the last part of that remark. Smith visited the area twice, in 1614 and 1615. He was taken prisoner for a while by the French on the second visit, affording him time to write this book. It was Smith who gave the land the name "New England." It previously was called northern Virginia. $125,000.

The book displayed on the cover of this catalogue represents a milestone in American printing. While the title is The Psalm Hymns and Spiritual Songs, of the Old and New-Testament... it is commonly referred to as the Bay Psalm Book. It was the first book printed in America. Not this particular copy, as it is a 1693 seventh edition of the book first published in 1640. However, it is the earliest edition of this first American book that is at all practically available. There are eleven copies of the first edition still known to exist. Nine are held by institutions unlikely to ever relinquish their copies, one by the Old South Church in Boston, and one in private hands. The one in private hands was recently sold by the Old South Church, which once owned five copies, but is now down to just one. If the privately held copy ever becomes available again (not likely), it may be out of your price range as it sold in 2013 for $14.2 million, the most ever paid for a printed book. Reese points out that there are no known copies remaining of the second, fourth, fifth, or six editions. There are two copies of the third edition, both in institutions and unlikely to ever return to the market. That leaves this seventh edition as the oldest one still available (it is the only surviving copy of the seventh edition). There are a few survivors among editions 8-12 but all of these are held by institutions. Item 16. $750,000.

The first permanent English settlement in America came in 1620. By 1774, the relationship between England and its colonies had totally broken down. Angry Boston colonists, upset by British taxation without representation, threw British tea in Boston Harbor, the Boston Tea Party. Rather than trying to diffuse the tension, the British responded with harsh reprisals. Though some attempts at reconciliation were later made, the relationship was essentially over when in the spring of 1774, England imposed five new laws on the colonies, known as the Intolerable Acts. Of course, that was not the British name for them. They thought them just reprisals for the spilled tea. The Americans saw it differently. The first act closed Boston harbor until the colonists repaid the East India Company damages for the lost tea. The second allowed for the suppression of riots by sending American defendants off to England for trial, where courts were likely to be far less sympathetic. The third placed regulations on the Massachusetts government that reduced the power of the colonists. The fourth required Massachusetts residents to quarter British soldiers in their homes. Naturally, these soldiers would not have been welcome. The fifth gave Quebec control over certain western American lands, along with greater tolerance toward French Catholics, intended to cause greater loyalty on their part to the Crown in disputes between the American colonists and the colonial power. Rather than succumbing, the colonists instead called together the first Continental Congress. The battle was on. Item 28. $35,000.

That spring, England appointed General Thomas Gage as the Military Governor of Massachusetts. It was not a popular choice among colonists. Rather than trying to ease the tensions, Gage just threw more fuel on the fire. In June of 1775, he issued A Proclamation. He would describe it as the imposition of martial law. This came two weeks after Lexington and Concord, and Gage accused the patriots of being cowards, hiding "behind Walls and lurking in Holes." Gage describes the "infringements" upon the Crown as "too many to enumerate," and "too atrocious to be palliated." He follows with much similar hyperbole, but then magnanimously offers to pardon all those colonists who agree to immediately lay down their arms and return to peaceable behavior, except for Samuel Adams and John Hancock, whose behavior was unforgivable. Several printings were made of this proclamation, some by printers sympathetic to Britain, some not. This one comes from Benjamin Edes, who was not. He faithfully prints Gage's words, but above the Proclamation, Edes provides the following introduction:

"The following is a copy of an infamous thing handed about here yesterday, and now reprinted to satisfy the curiosity of the public. As it is replete with consummate impudence, the most abominable lies, and stuffed with daring expressions of tyranny, as well as rebellion against the established, constitutional authority of the American states, no one will hesitate in pronouncing it be the genuine production of that perfidious, petty tyrant, Thomas Gage."