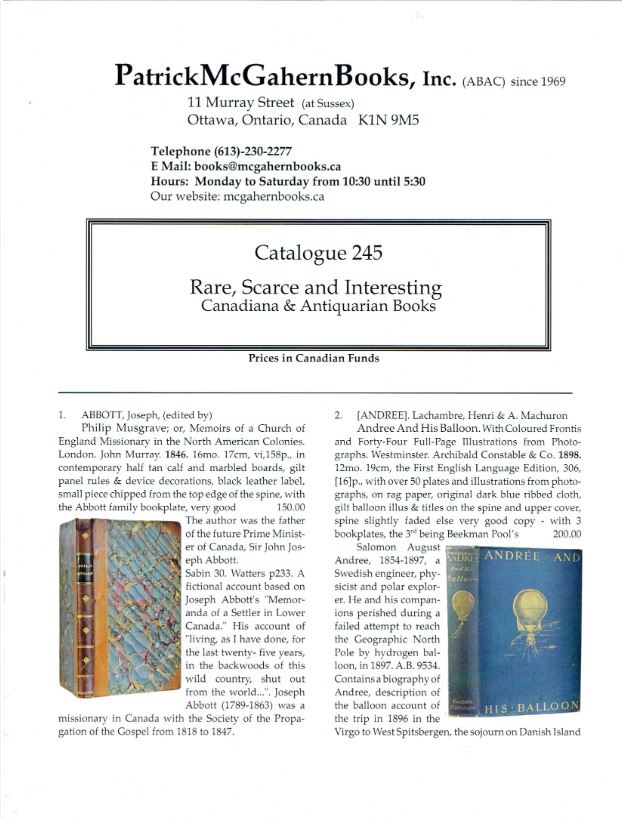 Patrick McGahern Books has published a catalogue of Rare, Scarce and Interesting Canadiana & Antiquarian Books. That does sum up what you will find. Everything will qualify as antiquarian, and a large number are in some way related to Canada as well. Some are not. The United States and Scotland get their due. Here are some items available from the Ottawa bookseller.

We start with Three Years in Canada: An Account of the Actual State of the Country in 1826-7-8, published in 1829. The author, Scotsman John MacTaggart, was not an explorer or a tourist. He was a civil engineer who came to Canada for specific purpose. He was hired to be the Clerk of the Works for the construction of the Rideau Canal. The canal covers 160 miles of what was then back country, running from Ottawa city to Kingston, on the eastern end of Lake Ontario. It combines various existing lakes and waterways with canals in a network which runs from Lake Ontario to the Ottawa River in Ottawa. Through the Ottawa River, it then created a water route from Montreal to Lake Ontario. Since there already is a water route from Montreal to Lake Ontario – the St. Lawrence River – it might seem superfluous. It was. However, the British were concerned that in case of another war with the U. S. (the War of 1812 still fresh on their minds), they feared the Americans could block shipping of arms on the St. Lawrence which forms part of the border. The Rideau provided an alternative. It turned out, the U. S. and Canada never went to war again, so the canal was not needed for military purposes. It was used for commercial shipping for awhile as it was a smoother route than the St. Lawrence until locks made that more direct river route the better choice. Today, the Rideau Canal is still open, used more for tourist travel. You might wonder how the canal can operate. Doesn't the water freeze? Of course it does. It's Canada. It is open for boating May-October. However, in the winter, five miles of it in Ottawa becomes a long skateway, used for recreation or even for commuters working in the city. Icy weather may make the roads dangerous for commuting, but not the Rideau Canal Skateway. As for Mr. MacTaggart, he became ill in 1828, either from drinking, the malaria which killed so many construction workers, or both, and returned to England, where he wrote his account, but died in 1830, two years before the canal was completed. Item 30. Priced at CAD $1,100 (Canadian dollars, or approximately $839 in U.S. currency).

Here is a man not generally associated with Canada, and yet Canada appears in the title of Henry David Thoreau's important collection of essays: A Yankee in Canada, With Anti-Slavery and Reform Papers. It was published in 1866, four years after Thoreau's death, edited by friend Ralph Waldo Emerson and others. Many of the essays had appeared in magazines, or were lectures Thoreau had given. The book's title comes from an 1853 magazine article entitled An Excursion to Canada. He had visited Quebec, and writes about his visit, what he saw, and the French Canadians. It is an entertaining essay, though not one of his heavyweight pieces. Most notable in this collection is an essay that originally appeared in 1849 under the title Resistance to Civil Government, but now renamed Civil Disobedience. In it, he expounds on his view that we are to follow our conscience, not government directives, when we believe the government is wrong. Thoreau believed that not even democratic governments should be blindly followed, as democratic governments could be just as wrong as any other form if the majority was in error. At one point, Thoreau implemented his principle by not paying a tax on the grounds that it was used to support a government that enforced slavery, and had acted as an imperialist power in conducting the Mexican War. He spent a night in jail until someone paid his tax for him. Thoreau's principles would become motivations for Gandhi and Martin Luther King in the next century, though they also are followed by some on the right end of the spectrum these days who deny government authority. Item 54. CAD $1,200 (US $915).

Item 2 provides a biography and a travel account of Arctic explorer Salomon August Andree: Andree And His Balloon, by Henri Lachambre and A. Machuron. Andree was a Swedish engineer who became fascinated with balloon travel. He also was interested in scientific exploration in the far north, in which he participated. He combined the two to plan for a balloon mission to the North Pole, which no one had reached when he first set out in 1896. However, high winds forced the mission to be canceled. The following year he set out again, and once more climatic conditions were less than ideal. This time, with all the backing and interest he had generated, Andree felt he could not back down. He and two companions set out. They immediately had trouble with the ropes that were supposed to drag on the ground, serving as a rudder. They had no control, other than to follow the wind, which was not leading them to the pole. Within three days, the balloon came down on the pack ice, perhaps intentionally as they were going the wrong way. They were well supplied and headed east, but the movement of the ice was greater than their progress and they drifted west. They changed directions and eventually made it to White Island, a far northern part of Norway. However, they were exhausted, and for reasons not entirely clear, perhaps disease, perhaps being worn out, they all died within two weeks. The outcome was unknown to the authors of this 1898 biography, which focuses on Andree's earlier life and missions. It was not until 1930 that their bodies, along with a diary and photographs, were found. Item 2. CAD $200 (US $152).

Catherine Parr Traill grew up in genteel society in England, but in 1832, she, her sister, and their husbands emigrated to Canada. It was a harsher life than they expected. Traill was a writer and wrote several books about roughing it in Canada, and a guide for newcomers. Item 55 is a different type of book. She also loved nature and excelled at writing detailed descriptions of it. This book is Canadian Wild-Flowers. Traill provided the copy while her niece, Agnes Fitzgibbon, provided the paintings and lithographs of the wildflowers. They are displayed on ten hand-colored plates. This is the 1869 issue of the book first published in 1868, which quickly sold out. CAD $1,500 (US $1,146).