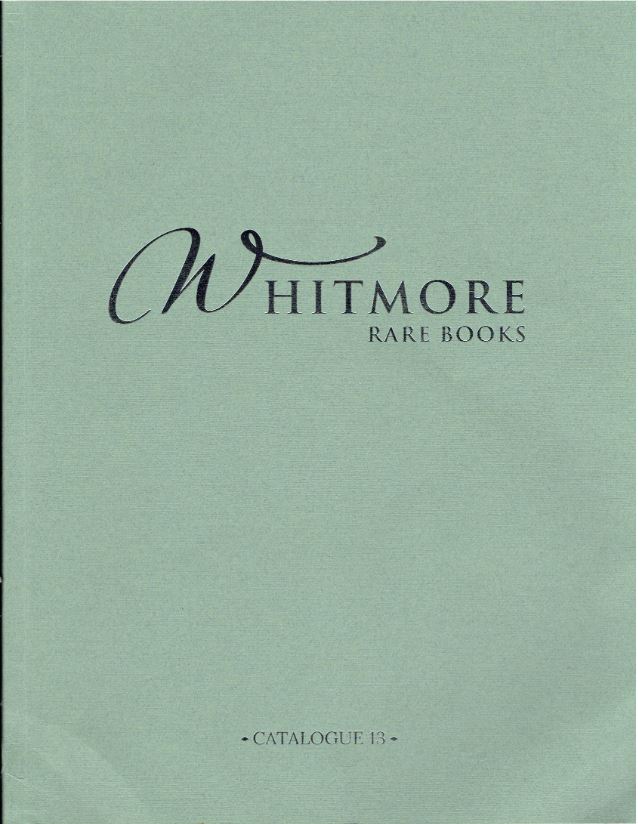 Whitmore Rare Books has released their Catalogue 13. Mostly what you will find are novels, from the 18th-20th century, written by authors ranging from notable to great. You will know their names. A few items stray from the category of novels, though they are novel in the adjective form. There are some poets to be found, and a few books of nonfiction for those interested in the truth, or at least the "truth" as their authors saw it. This is a fine collection of important books in excellent condition. These are some you will find.

We will begin with a book that will appeal both to those who appreciate fiction and those interested in reality. It is a novel that played a major role in American history. In 1850, amidst growing divisions North and South, Congress passed and the President signed the Compromise of 1850. It was designed to make everyone happy. Instead, no one was. One displeased northerner was Harriet Beecher Stowe. The part that most offended many northerners was the Fugitive Slave Act, which required those in the North to return escaped slaves to their "owners," an activity with which they wanted no part. Ms. Stowe responded by writing a novel, fiction designed to show people just how terrible slavery was. Published in 1852, that book is Uncle Tom's Cabin, and it went on to become the most popular American novel of the 19th century. It was beloved by many in the North, despised in the South. Either way, it was influential, playing an important role in forcing America to confront the issue in all its ugliness. This copy is in exceptional condition, apparently never having been read, and comes with a card stating, "Trust in the Lord And do good A sure way to attain happiness here & forever from Harriet Beecher Stowe February 27, 1888." Item 71. Priced at $20,000.

Here is another novel whose realism touched Americans in a way few books do. It expressed their pain acutely. The Grapes of Wrath won numerous literary awards, was cited as the author's "epoch chronicle" when John Steinbeck received a Nobel Prize, and was the best selling book of 1939, the year in which it was published. The 1940 film version, starring Henry Fonda, is also one of the most honored of movies. It was not without controversy at the time, displaying its sympathy for poor farmers at the mercy of large farm owners during the desperation of the Great Depression. However, what it depicted, the misery of an Oklahoma Dust bowl family driven from its home to work for subsistence wages in California, was all too real for many at that time. This is a fine copy in a fine dust jacket. Item 68. $11,500.

Next up is a children's classic, though perhaps better known today for Disney's rendition than the original. Item 18 is the first American edition of 1892 of The Story of a Puppet, or the Adventures of Pinocchio, by Carlo Collodi. Collodi first published his story serially in an Italian magazine a decade earlier. It was a much darker tale the first time around. Collodi was intent on teaching children the importance of good behavior, and the consequences of bad. Pinocchio was less the lovable child who starts out a rogue, but just a bad child. In the end of that version, his enemies, the cat and fox, string him up from a tree and kill him – a lynching. However, once it reached book form, first in Italy, and then in American and English editions, the story was extended, Pinocchio did not die, he learned his lesson, and when he did he turned into a human boy. $5,750.

Item 56 is one of those pieces of nonfiction, an account of an 1840's trip west by a Boston Brahmin, Francis Parkman. Parkman set out on the Oregon Trail in its early days, not to move to Oregon, but to see what was out there. He spent much of his time learning about the Indians, people that most trail travelers did their best to avoid. He only went as far as Wyoming, but Parkman did go off the beaten path to see more of what was there. When he returned, he wrote this account: The California and Oregon Trail. As one might expect from his time and status, Parkman certainly felt his people were culturally superior to the "savages," but with recognition of his times, it is an informative and entertaining account of his journey. Offered is the first edition, second issue, published in 1849. The first issue is essentially unobtainable, only a few copies having been printed, likely for Parkman's personal use. $850.

This is the Holy Grail for American poetry collectors. It has been described as the Declaration of Independence of American poetry. It was not very well received when Walt Whitman privately published his Leaves of Grass in 1855. It was a thin volume (later editions expanded the number of poems), and it was not what was generally expected of poets at the time. It might have died on the vine but for the endorsement Whitman received from America's preeminent poet of that day, Ralph Waldo Emerson. If Emerson liked it, there must be more than meets the eye. Item 92 is the rare first edition of Leaves of Grass. $95,000.

Whitmore Rare Books may be reached at 626-297-7700 or info@whitmorerarebooks.com. Their website is www.WhitmoreRareBooks.com