New Arrivals, Many Signed, from Quill and Brush 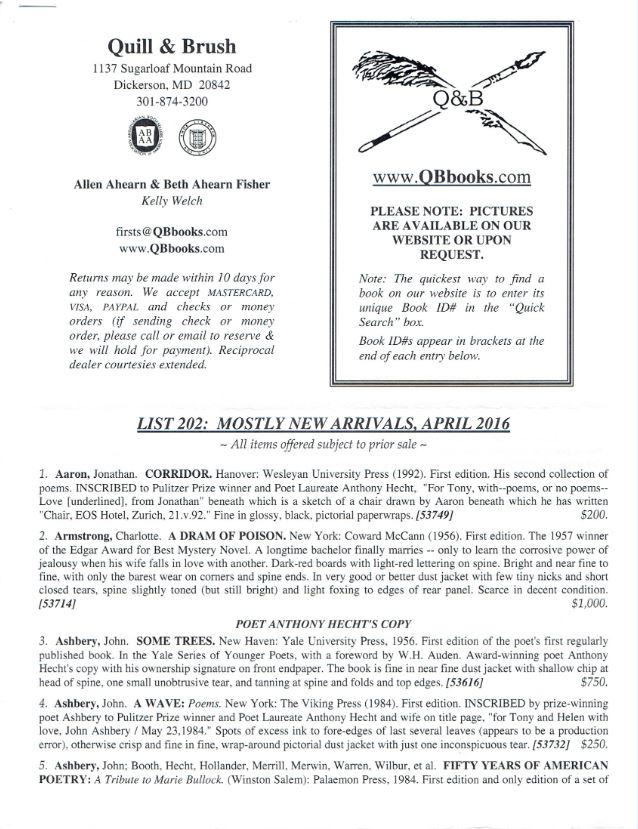 Quill and Brush, of Dickerson, Maryland, has published their List 202: Mostly New Arrivals, April 2016. We're slightly late on this, but printed catalogues don't travel at the speed of light. They travel at the speed of the Post Office. This catalogue is top heavy with literary material, though an occasional exception slips in. There are particularly extensive collections of material from Joseph Conrad and Ford Madox Ford, but many other authors make briefer appearances. Particularly notable is the quantity of signed books. If you focus on books signed or inscribed by the author, you will find a wealth of material here. Now, these are a few of the books and related items we found in this recent selection.

We begin with one of the more chilling tales, particularly because this one is not fiction. Item 10 is a 1965 first edition of Truman Capote's In Cold Blood. It is #483 of 500 signed and numbered copies. Capote conducted intensive research into the killings of a family, including many interviews of the killers. Two ex-convicts, acting on a tip that there was a safe filled with money in a family's rural Kansas farmhouse, entered the home with an intent to rob it. There was no safe and almost no money. For some unfathomable reason, the two killed all four members of the family, with little motive except, perhaps, eliminating witnesses. They were executed for the crime. Priced at $2,500.

Next up we have a signed book from one of the most notorious killers in American history. At least, he pleaded guilty to the murder, though he later unsuccessfully tried to withdraw the plea. For the rest of his life he blamed it on a conspiracy of others, including J. Edgar Hoover and the FBI. James Earl Ray was arrested for the shotgun slaying of Martin Luther King in 1968. His behavior was certainly suspicious, including fleeing to Canada. When he was captured two months later, he entered a guilty plea, but later claimed he only did so to avoid the death penalty. Item 94 is Who Killed Martin Luther King? The True Story by the Alleged Assassin, published in 1992. Ray convinced several people close to King, including family members. Jesse Jackson, who wrote the forward to this book, believed that Ray was at most a small player in a wider government conspiracy. The preface of this book was written by professional conspiracy theorist Mark Lane. Despite convincing some of those closest to King, Ray never got very far convincing those who looked at the situation from more of a distance of his innocence. $300.

Bram Stoker wrote some terrifying tales, but at least his were fictional. He is best known for his bloodsuckingly terrifying Dracula. However, item 105 is a first edition of Stoker's first novel, The Snake's Pass. This copy was inscribed by the author on November 20, 1890, just two days after the date of publication. It was inscribed to J. L. Toole, an English actor who was a close friend to both Stoker and Henry Irving, the owner of London's Lyceum Theater, and Stoker's employer at the time. Stoker dedicated his biography 15 years later to Toole. $7,500.

Here is another signed copy, though rather than 2 days after the publication date it came 18 years later. Item 109 is the Official Program Commemorating the Inauguration of Harry S. Truman and Alben W. Barkley, on January 20, 1949. Truman signed the copy on May 13, 1967. Truman's election was likely the biggest upset in American presidential history. The experts thought he had no chance, but Harry gave them Hell. $2,500.

This next item is signed by another President, but this one is a book. It is My Life, the autobiography of Bill Clinton, published in 2004. This is a first edition, the trade edition that preceded the limited signed edition. Bill could not only speak, he could write – over 1,000 pages worth. $300.

This is a book that might double in price in the next year, based on the price of President Clinton's biography. It comes from another would-be President Clinton, Hillary, who certainly hopes to be President Clinton this time next year. Her book is priced at only half that of her husband, but if she get to become President too (and we provide equal pay for women), a double is only logical. Item 13 is It Takes a Village, published in 1996. It has been signed by Mrs. Clinton. $150.

Whoever becomes the next President will have to deal with the issues raised in this book back in 1958. Item 63 is a first edition of The Affluent Society, by John Kenneth Galbraith. Even back then, when income disparity was much less than it is today, Galbraith was writing about how so many people were being left behind despite a growing economy. The unprecedented level of anger that seems to have been unleashed in this election cycle is a sign that someone needs to deal with those not participating in prosperity before they become angrier still. $250.