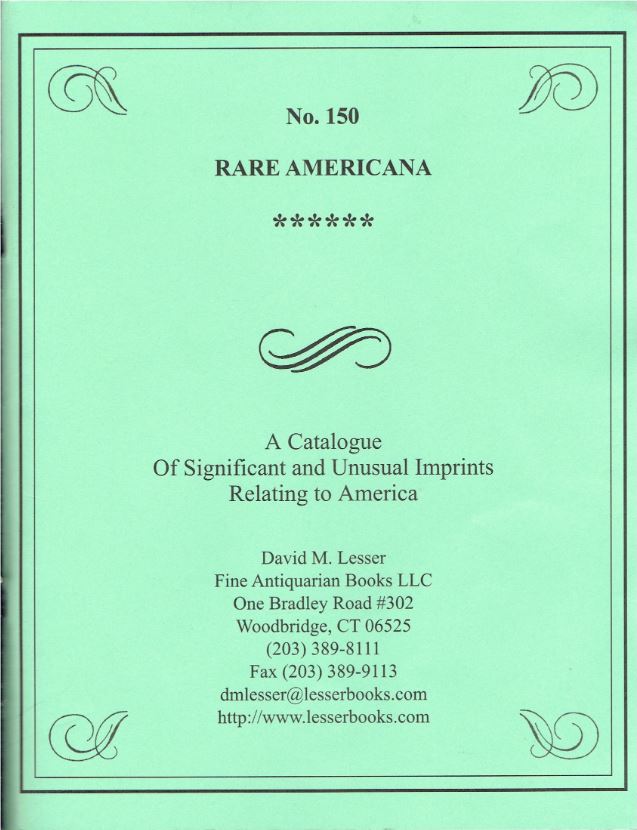 David M. Lesser Fine Antiquarian Books has issued a new catalogue of Rare Americana. This is their sesquicentennial - catalogue number 150. David Lesser regularly publishes selections of primarily shorter form American material – pamphlets, broadsides and the like, with a few full length books. The material is old and always fascinating. As the timing is mostly late 18th and 19th century, there are always many items relating to the days of the Revolution, and the later unending battles over slavery and the inevitable Civil War. Naturally, there is much both political and theological in nature. And then, there is always some crime, western expansion, railroad material, almanacs, personal disputes, entertainment, and whatever else was on the American public's mind. Here are a few samples from this 150th go-round.

We will start with a clever advertising brochure, issued by Austin, Tomlinson and Webster, for their Jackson Wagon. It contains several humorous cartoons promoting the vehicles. One shows a bunch of Jackson Wagons in a tree with the caption, "They come high – but they must have them." Another depicts Africans digging for gold, so they could buy Jackson Wagons. The piece was published in 1898, which was the company's peak. They sold 5,000 wagons that year, produced in their Jackson, Michigan, plant by 200 workers, 120 of whom were prisoners. Evidently, the people at AT&W could not see what was coming straight at them – the automobile. It took them over half a century to reach their peak, but within a decade, the company was on its last legs, soon to go out of business. Adapt or survive. They didn't. Item 6. Priced at $450.

Item 27 is an elephant folio Civil War broadside from the Union point of view. It is headed Panorama of the Seat of War, and it displays portraits of eight Union commanders, beneath which are chronological accounts of battles through February 25, 1864. More intriguing is the back of the broadside. It is headed Comicalities of the War for the Union. The left and right sides display fourteen "Union heroes" each, while in the center are the comicalities, various drawings. For example, there is the monument to the memory of Jefferson Davis, a skeleton atop a pyramid of skulls. Another shows Davis hanging from a gallows with the caption, "Long may HE wave." This is evidently a quite rare item. $2,000.

He was President of the United States, but the man received little respect. Millard Fillmore was not elected. He succeeded to the presidency in 1850 when Zachary Taylor died in office. He reversed Taylor's course by signing the Compromise of 1850, Henry Clay and Daniel Webster's attempt to reconcile North and South, which only inflamed the antagonism even more. In 1852, his party, the Whigs, would not even renominate him. It didn't matter because sectional divisions tore the Whig Party apart that year and it soon disintegrated. However, Fillmore was back in the running in 1856, when he was nominated for President by the American Party, better known as the Know-Nothings. For a brief moment, they were a serious contender. The Know-Nothings were an anti-Catholic, anti-immigrant, nativist party that quickly disappeared from the political scene as the nation focused its attention on the impending North-South disaster. Still, in 1856, it got Fillmore his only presidential nomination and a song. Item 65 is the Fillmore Quick Step as Performed by the Independent Blues Band Composed and arranged by Albert Holland. Was there blues music in 1856? It probably refers to the color. The cover features a picture of Fillmore, emblems for the states, and the quote, "If there be those, North or South, who desire an administration for the North as against the South, or for the South against the North, they are not the men who should give their suffrages to me. For my own part, I know only my country, my whole country, and nothing but my country." Fillmore believed the Republicans were too northern oriented, the Democrats too southern. He was strongly pro-Union and still believed a middle road could be found to keep the country together. His focus was not the Know-Nothings' nativist agenda, but that agenda turned off most of the country, and with it Fillmore's candidacy. This piece was printed in Baltimore, which was fitting, as Maryland was the only state he carried. $500.

This next piece takes us back to the early days of the nativist movement that led to the Know-Nothings – the Philadelphia Nativist Riots of 1844. Many Catholics had immigrated to Philadelphia to work in the factories at this time, with a large number coming from Ireland. Rumors spread among Protestants that they were attempting to remove the Bible, or at least their version, from the public schools. A meeting held by a precursor party to the Know-Nothings in the Irish neighborhood of Kensington led to confrontations and eventually a series of riots. Item 120 is a broadside from that year, headed Philadelphia Riots, subheaded De Philadelphia Riots; or I Guess It Wan't De Niggas Dis Time. This ugly mock black dialect piece was published to promote the Whig candidacy of Henry Clay that year. "Oh in Philadelphia folks say how / Dat Darkies kick up all de rows / But de riot up in Skesin'ton [Kensington], / Beats all de darkies twelve to one. / An I guess it wasn't de niggas dis time..." The Whigs were competing with the American Party for the nativist vote against the Democrats. $375.

Get ready for some startling entertainment this evening. Item 152 is a broadside announcement of Splendid Amusement! Startling Feats of Legerdemain! Mr. A Walker... The spaces for the date and time have not been filled. Along with the magic there is an "extremely laughable performance of Punch & Judy consisting of ten beautiful mechanical figures!" Still, Mr. Walker saved the best for last. "To conclude with the celebrated nose amputation! Large Noses Preferred!" Nose amputation? I have not been able to find any information on how Mr. Walker performed this feat, nor even who Mr. Walker was, and since this announcement was dated 1855, it's too late to check it out. Item 152. $175.