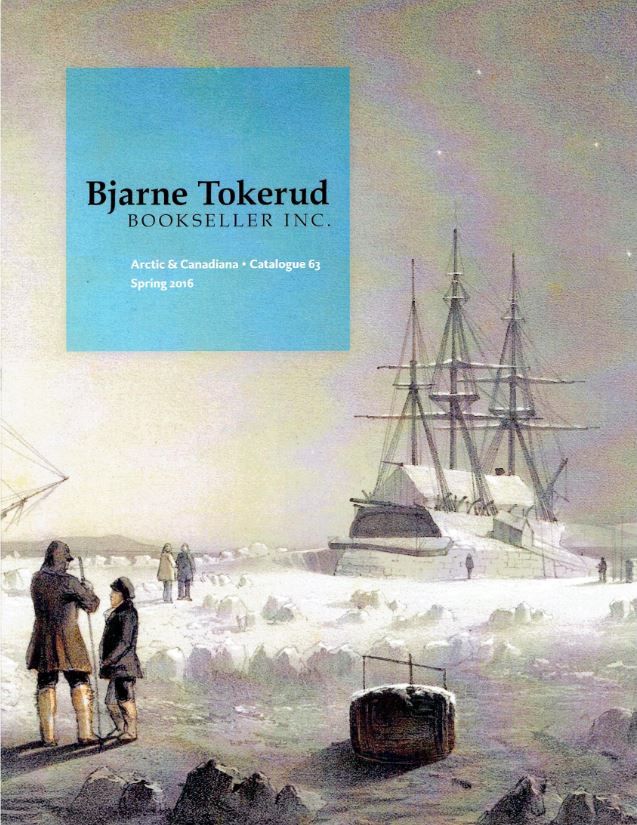 Bjarne Tokerud Bookseller has released a catalogue of Arctic & Canadiana. The image on the cover, drawn by Walter William May on one of the many expeditions to find the lost ships of Sir John Franklin, is a fitting introduction. Much of what you will find here relates to explorations that required overcoming intense cold, while other works refer to places that are just cold, but not so intensely. It took hardy souls to explore the Arctic, or settle Canada. This catalogue is a tribute to them. Here are a few of the works you will find.

The first item is a finely bound set of John Barrow's two histories of Arctic voyages. The first is A Chronological History of the Voyages into the Arctic Regions; Undertaken Chiefly for the Purpose of Discovering a North-East, North-West or Polar Passage between the Atlantic and Pacific... published in 1818. It covers everything from early Scandinavian voyages to the departures of those of Ross and Buchan in 1818. Barrow had proposed those two expeditions. The second volume is Voyages of Discovery and Research within the Arctic Regions, From the Year 1818 to the Present Time... published in 1846. It is a sequel. Barrow himself had visited warmer climes, serving in South Africa and Asia. However, from his position in the British Admiralty, he became the major proponent of Arctic exploration. Like others before him, he vainly sought to find the mystical Northwest Passage, that could have saved so much time for Asia traders in the days before the Panama Canal. This copy of Barrow's voyages came from the Lighthouse Trust. A few years ago, the Trust was tasked with selling books long owned by Britain's Northern Lighthouse Board. The agency had determined it no longer made sense for a board tasked with operating British lighthouses to bear the expenses of maintaining a collection of valuable books of no practical use for their mission. Item 1. Priced at CAD $4,000 (Canadian dollars, or approximately $3,099 in U.S. currency).

Of all the attempts to find a northwest passage, none was as well-known or consequential as the 1845 expedition of Sir John Franklin. That is not because he found the passage or much else. Rather, he got trapped in ice and for many years, no one knew what happened to him. Ultimately, the ending was tragedy. All of his men either starved, died of disease, or froze. However, his voyage led to an enormous number of rescue missions, and once it was recognized that the cause was lost, others to determine the details of his fate. In the process, much new information was learned about the Canadian Arctic. Item 3 is The Last of the Arctic Voyages. Being a Narrative of the Expedition in H.M.D. Assistance, Under the Command of Captain Sir Edward Belcher, C.B., in Search of Sir John Franklin, during the Years 1852-53-54, written by Belcher and published in 1855. This was the last of the official rescue missions, though Mrs. Franklin backed a few private ones. Belcher did not find Franklin, though ironically, he did rescue Robert McClure, who was also out searching for Franklin. Belcher came back with much in the way of scientific and geographical information, though he lost four of his five ships and never again was given such a command. CAD $4,500 (US $3,489).

The ultimate non-practical achievement of Arctic exploration was reaching the North Pole. Many tried, but obstacles, climate and ice, made it extremely difficult. In 1907, Frederick Cook claimed to have reached the pole, but that clearly was incorrect if not downright fraudulent. The goal was finally reached in 1909 by Robert Peary, though he too has his doubters. Item 58 is the first British edition of The North Pole by Peary, published in 1910. Peary, along with Matthew Henson and four Inuits said they reached the pole, and most today give them credit. Questions were raised as some believe a journey to the pole from his last support station would have taken longer than the time claimed by Peary. $450.

Alexander Mackenzie was not attempting to find the colder reaches though he inadvertently did so on his first expedition. Mackenzie was trying to make it across the North American continent well before Lewis and Clark embarked on their journey. The difference is that Mackenzie was taking a route through Canada. On his first journey in 1789, Mackenzie traveled up a river he thought would lead to the Pacific. He thought wrong. What he followed is today known as the Mackenzie River, and it flows into what he called the "Frozen Ocean" – the Arctic. Undaunted, Mackenzie tried again a few years later. This time, he followed the Peace River, then overland to what he thought was the Columbia River, but was in fact the Fraser River. Unable to follow it too far because of the torrential currents and warnings by natives, he went overland again, crossing some mountains before reaching the Bella Coola River. This route finally brought him to the Pacific. He became the first to cross the continent in 1793. Item 38 is his account in an exceptional binding, Voyages from Montreal, on the River St. Laurence, through the Continent of North America, to the Frozen and Pacific Oceans; In the Years 1789 and 1793... published in 1801. $9,000.

Vilhjalmur Stefansson, Canadian born son of recent Icelandic immigrants, was a notable early 20th century Arctic explorer. He was also controversial in his day. His greatest accomplishments came from the Canadian Arctic Expedition of 1913-1918, though he had spent much time in the far north before that. What was notable about Stefansson, that many other explorers neglected, was his determination to understand the ways of the native Inuit, to recognize how they survived the extreme climate and apply their lessons. However, many thought he was a poor leader, particularly after 11 of his men died when their ship became trapped in ice and sank. His reputation suffered further after the expedition when he attempted to settle Wrangel Island, north of Siberia, for Canada when it was recognized as Russian territory, losing four ill-equipped settlers. He moved to the U.S. and focused on teaching and writing. Item 75 is Stefansson's My Life with the Eskimo, published in 1924. It describes his earlier expedition, 1908-1912, in northern Canada and Alaska. $125.