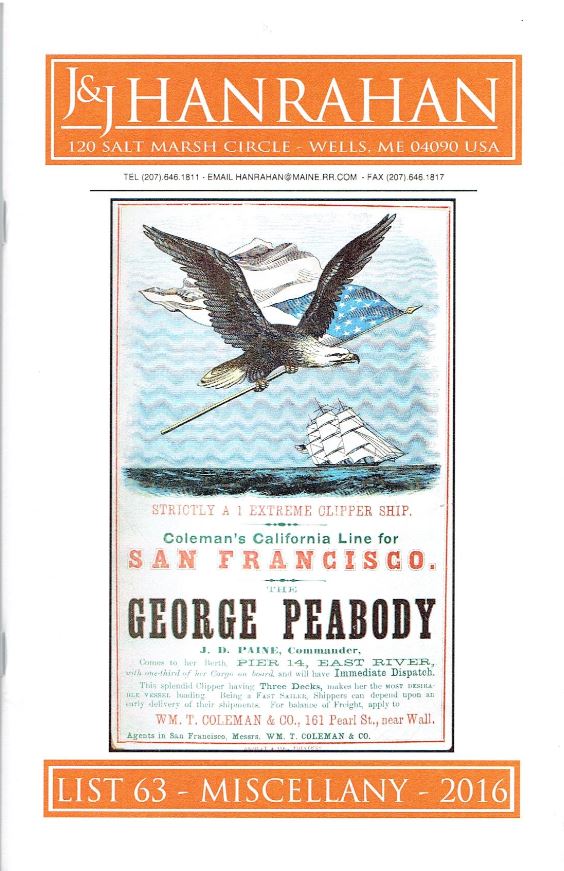 J & J Hanrahan of Wells, Maine has released their List 63 – Miscellany - 2016. Being a miscellany, it's impossible to pinpoint what you may find here. Naturally, there are items from the booksellers' native Maine, but also from places far away, like New Hampshire. But then again, you can find Chicago, California, England, Germany, so the range is wide. There is a goodly number of New Hampshire selections as there is a lengthy section of White Mountain items. The White Mountains cross the northern half of New Hampshire. During the 19th century in particular, it was a favorite getaway spot for wealthy residents of Boston, New York, and other eastern cities. In the summer, it is hot and humid in those cities, and in the 19th century there was no air conditioning, and in those homes, often little air circulation either. Trips to the mountains were impossibly difficult during the beginning of the 19th century, but the railroads made it feasible, though the lack of direct routes still made it a lengthy, complicated journey. Now, we will take off on a journey through the pages of this fascinating catalogue.

While no one person started the American Revolution, perhaps the closest to its father was James Otis. John Adams later described a speech made by Otis in 1761 as the moment "the child of independence was born." Relations between Britain and their American colonists broke down quickly after the French and Indian War ended in 1763. However, Otis was agitating even earlier. He was upset by the writs of assistance England adopted in 1760, which allowed Boston's customs officials to enter anyone's home whenever they pleased to search for contraband. Otis, in a powerful speech, delivered a long, stirring call against the practice. Then, in 1764, Otis published this pamphlet, The Rights of the British Colonies Asserted and Proved. Otis was responding to the Sugar Tax, the first of a series of taxes imposed upon the colonies without their approval. It was Otis to whom the phrase "taxation without representation is tyranny" is attributed. Otis believed people were entitled to freedoms under natural law. Unusual even among revolutionaries, he believed that natural law extended to black people as well. After this pamphlet was published, Otis would continue to agitate against British actions, including the even more hated Stamp Act. Unfortunately, Otis suffered from a deteriorating mental state, aggravated by a blow to the head by a customs official in 1769, so he faded from leadership in the cause as the Revolution grew near. He died in 1783 after being struck by lightening. Item 47. Priced at $1,500.

In 1831, John Quincy Adams delivered a eulogy in Boston to his predecessor as President, An Eulogy: On the Life and Character of James Monroe, Fifth President of the United States. Adams had served as Monroe's Secretary of State for eight years at a time when that position, more so than even vice-president, served as a stepping stone to the presidency. It was Adams who wrote the Monroe Doctrine and was involved in obtaining Florida while serving as Monroe's Secretary of State. This copy is inscribed by Adams to Edward Everett. Everett was a congressman at the time, later served briefly as Secretary of State himself, and was known as one of the greatest orators of his time. It was Everett who delivered the Gettysburg Address – no, not the brief one given by Abraham Lincoln that day on the battlefield. Everett gave the longer, featured address, which was soon forgotten behind Lincoln's stirring words. Item 1. $2,500.

Next up is another presidential presentation copy. Though not highly popular in his time, Adams is well regarded by most historians today. This next President is not. The book is An Expedition to the Valley of the Great Salt Lake of Utah, by Howard Stansbury, published in 1852. This was a scientific mission, though Brigham Young at first feared that the purpose was to push out the recently arrived Mormon settlers. Stansbury was evaluating trails to the west coast, scouting out possible routes for a transcontinental railway. This copy of his book was inscribed to a Dartmouth professor by Franklin Pierce, not yet but soon to be President of The United States. In fact, it is dated November 2, 1852, which was the day before Pierce was elected to the presidency. Item 22. $1,250.

Here is one of those White Mountains items, one designed to bring out their spectacular beauty. Item 66 is Gems of American Scenery Consisting of Stereoscopic Views Among the White Mountains. With a Descriptive Text. It contains 24 views and a double-page map of the White Mountains. Stereoscopic images are where they have two almost identical, but slightly shifted images side by side. You look through the viewer and it creates an illusion of three dimensions, like 3-D glasses. You can even view these images steroscopically today as the viewer is still attached to the book, but can be extended so as to look through it at the pictures. This was a patented addition by publisher and photographer Edward Bierstadt, lesser known brother of artist Albert Bierstadt. This book was published in 1878. $1,000.

The tallest of all of New Hampshire's White Mountains, and the highest of any in the northeastern United States, is Mt. Washington. It stands 6,288 feet tall, which may not sound like much to those living in the West, but it starts almost from sea level. The weather on Mt. Washington would make even the Rockies feel like Florida. It is cool in summer, but tolerable. Many take the railroad to the summit during the season. In the winter it is regularly below zero, with the lowest ever around -50 degrees. Still, this is not the worst part of the weather. Its relative height and location can make for fierce winds. The gales reach hurricane force 110 days a year, and it holds the record for highest wind speed ever recorded in the northern hemisphere – 231 mph. Wind chills can exceed -100 degrees. Long before official records were kept, Nathaniel Noyes made the trek up the mountain and recorded conditions for 100 consecutive days, June 8 – September 16, 1854. During that period, temperatures ranged from 24° – 66°. It must have been a warm summer, as it reached 60° 17 times, compared to a normal of 13-14. However, by September 11, signs of winter appeared, temperatures below freezing all day, winds reaching hurricane force, and snow covering the ground. Noyes was ready to go five days later when his 100 days on the mountain were up. His account is entitled Temperature of the Weather at the Summit of Mount Washington New Hampshire, published in 1854. Item 93. $1,500.