The American West and Much More from Back of Beyond Books 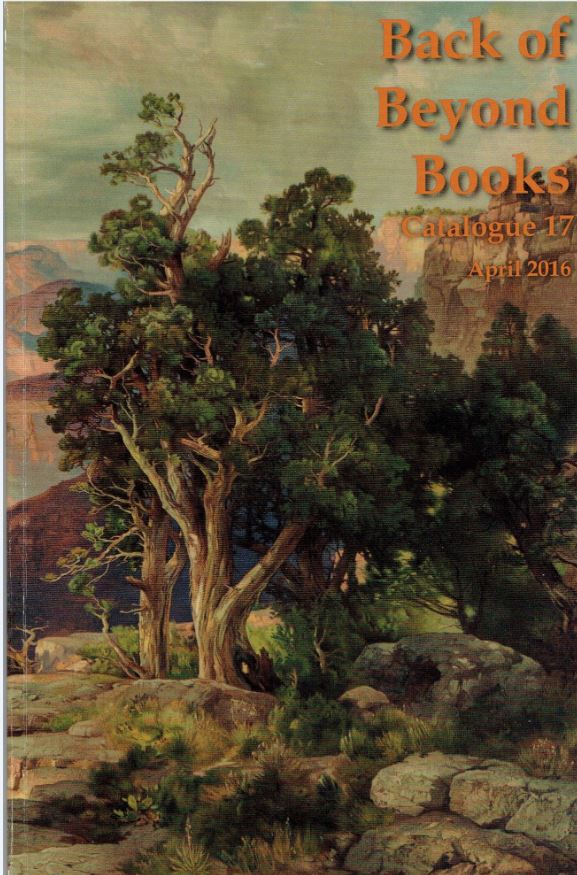 Back of Beyond Books Catalogue 17.

Back of Beyond Books has published their Rare Book Catalogue 17. Back of Beyond is noted for their concentration on the American West, the Southwest in particular, the Four Corners region in even more particular. However, this catalogue stretches way beyond those borders, and not just geographically. Yes, they have material that goes east, but also books unrelated to any specific geographical area, unless places like the Hundred Acre Wood are considered geographical locations. The catalogue is divided into categories, which should be helpful in gauging what you might find (except for the last category): National Parks, Western Americana, Mormon History, Classic Literature, Native Americana, Trade Catalogues, Natural History, Mining, Maps, Pocket Maps, and Miscellaneous. That last category means anything else you can imagine may be here. It's where you will find the 24-piece Charles Dickens plate set. Here are a few items on which to feast your eyes, rather than your palate.

General George Armstrong Custer couldn't have appreciated the irony of the title of his book when it was published in 1874: My Life on the Plains. Or, Personal Experiences with Indians. Custer will forever be remembered for his unfortunate final personal experience with Indians two years later. Up until that time, following his service during the Civil War, Custer spent most of his time in the West, pacifying Indians. Herein he tells about those times. The Indians got their revenge. Item 44. Priced at $950.

Probably the event San Francisco is most known for was its worst one. That always seems to be the case. Item 106 consists of two broadsides issued just after the disastrous earthquake of 1906. These are two slightly different versions of the "Shoot to Kill" broadside warning would-be looters to beware. It was issued by the Mayor, federal troops, and the police. It warns that all of these forces "have been authorized to KILL any and all persons found engaged in looting or in the commission of other crimes." Having to drag offenders off from the burning ruins to court was not a distraction they felt they could afford in this situation. One of the broadsides is dated April 18, 1906, the other April 13. Since the earthquake struck in the early morning hours of April 18, we can presume the latter date was in error. $1,950.

Item 152 is a boudoir card (large mounted photograph) of ten Indian prisoners taken in 1889, printed circa 1890. One of them is the Apache Kid. The Apache Kid had been captured by a rival tribe while a boy, but was freed by the U. S. Army. With no place else to go, he hung around army camps, becoming a scout, and because he was so good at it, rose to the rank of sergeant. However, after a drunken brawl with other scouts in which some were killed, he was court-martialed and sentenced to death. That sentence was reduced to life, then ten years, and then overturned. Unfortunately, some locals pushed for his rearrest. This time, he was sentenced to seven years. Several Indians escaped, but a couple of guards were killed. The Kid was on the run. Most of the Indians did not survive long thereafter, but what happened to the Apache Kid is uncertain. The most common theory is he lived thereafter rustling horses and was killed by a posse four years later, but others claimed he was still stealing horses decades later. No one knows for sure. $4,000.

What happened to Apache leader Geronimo is known. After a long and determined resistance to Mexican and American forces, he was finally subdued, the rest of his life spent as a prisoner, but also a celebrity, permitted to attend fairs and sign autographs, even invited to participate in President Theodore Roosevelt's inauguration parade. Item 158 is a photograph of Geronimo and three other adult Indians, one being Geronimo's son holding a baby. It was a posed photograph by Tombstone photographer Camillus Sydney Fly, taken in 1886, before his surrender. $5,200.

Item 285 is a stock certificate for a company whose name is still well-known today, even though they have been out of business for 90 years. The Stanley Motor Company, and its Stanley Steamer car, was one of the best in the early days of automobiles. The steam car competed well against the internal combustion engine cars for awhile, but as those became cheaper and easier to use, the steam cars lost their competitive advantages. Instead, they became weaker performers for more money. F. O. Stanley sold the declining company to Prescott Warren, who sold stock in the company. This 1917 stock certificate is signed by Warren. It comes with a couple of related documents, including a 1923 announcement the company was in receivership, and one from a stock broker in 1924 stating the stock was worthless. Not quite. The company was worthless, but today, the stock certificate is worth $600.

You may think you have the most thorough collection of maps imaginable, yet here is one you probably don't have. How about a map of potato rot? Item 219 is Map Showing the Distribution and Severity of Potato Rot in the United States in 1885, and Also Approximately the Distribution of the Potato Itself, by Erwin F. Smith. It likely comes from some forgotten Department of Agriculture publication. Now, your collection can be complete. $125.

Denver has lots of enormous snowstorms, so it takes something special to hold that city's record. That occurred on December 4-5, 1913, when 45.7 inches fell. Item 66 is a booklet entitled That Snow Storm: Its Flakes Its Flurries Its Freaks, by W. E. Heatley, published in 1914. It includes many pictures of people, buried automobiles, horse teams and more in the piles of snow. $250. If you prefer Colorado rain, there is Pueblo Flood in Word and Picture, by John A. Martin. It depicts the flooding and devastation wrought by the June 3, 1921 flood in Pueblo, Colorado. Item 82. $75.

Here is one more collection of pictures, a personal photograph album of illustrious doors in Providence, Rhode Island, circa 1910's. They were taken by the "locally renowned photographer of doors and door hardware Harold Mason." If you don't know him, you must not be from Providence. Back of Beyond explains that "Mason was known for his obsession with doors." If you share Mason's door fetish, you will cherish his album. Item 273. $425.