Items Displayed at the Olympia Fair by Samuel Gedge Ltd. 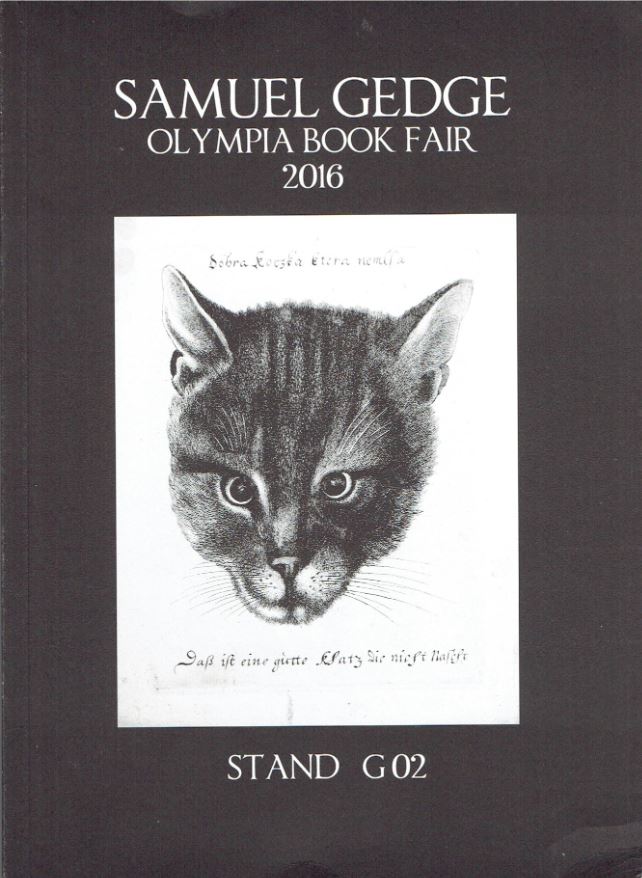 From the Olympia Fair.

Samuel Gedge Ltd. has printed a catalogue of Books, Manuscripts & Ephemera for the just completed Olympia Book Fair. This is not a typical fair list but a full, bound catalogue, with thorough descriptions and illustrations. Gedge offers a wide variety of material, including many shorter form printed items and ephemera. It is all antiquarian, mostly 17th to the 19th century. The variety is such as to make it hard to describe what sorts of things you may find, but here are a few samples from this fair catalogue.

Sweden was not well known for trading in the era when the English, Spanish, French and Dutch were forming overseas colonies and conducting large amounts of trade. However, a Swedish East India Company was licensed to begin trade in 1731, most of which was conducted with China. The license expired in 1745, at which time Swedish bankers and ship owners Abraham and Jacob Arfwedson petitioned King Frederick I for the new license. Item 2 is their plans for a trading company, Kingl. Maj:ts nadige Privilegium... The Arfwedsons planned to extend trading to the Americas. They even planned to set up a Swedish colony in the Caribbean. However, unlike the first Swedish East India Company, they were unable to attract sufficient foreign capital for their operation. After receiving preliminary approval for the plan, the license was returned to the owners of the original Swiss trading company. Sweden would not obtain a Caribbean colony until 1784, when France transferred the tiny island of St. Bartholemy to them in return for certain trading rights. A century later, Sweden returned the island to France for some cash. Priced at £750 (British pounds, or about $1,077 U.S. dollars).

Wenceslaus Hollar grew up in Prague, moved to Germany, France, England, Belgium, and back to England, where he died. He was a 17th century artist, though he was not seen as a great artist at the time. We might think of him more as an illustrator, a man who drew and etched, not by the work, but by the hour. He created close to 3,000 plates, and the Queen of England has a large collection of his work today. He is a respected, if not well known artist. His best known works are scenes of London, but so is the image seen on the cover of this catalogue. It was etched in Antwerp in 1646. However, this is not the original, but a circa 1700 etching of Hollar's cat by another. It even contains the same text as the original, in Czech and German. It translates roughly to, "This is a good cat, it does not steal." Item 71. £1,250 (US $1,795).

Tradesmen in the 18th and 19th century often produced trade cards, handbills and the like to portray their wares. Specialization was the word for merchants. While iron workers, glassblowers and such were common, here is a handbill you don't see often. Item 155 promotes the business of William Perkins, Wire-Worker. This is from Bristol, circa 1765. If you needed some sort of mesh, this was the place to go. Perkins made various sorts of sieves and "fine wire safes to keep out flies." I imagine those are screens. He notes that "he has a machine for weaving brass or iron wire." £450 ($646).

The British Royal Navy was the strongest such force at the beginning of the 19th century, but that didn't stop them from supplementing those ships with private ones. The procedure was known as privateering, which is essentially state approved piracy. The crown was fond of privateering even if it didn't like to talk much about it. It accomplished two goals while costing the state nothing – disrupting enemy shipping, and the crown got to keep a portion of the stolen goods. Item 80 is a letter of marque from King George III dated 23 May 1806. It authorizes Captain Francis May "to set forth in a warlike manner the said ship Unity... and therewith by force of arms to apprehend and take the ships vessels and goods belonging to the King of Prussia or any persons inhabiting within his countries territories or dominions..." This was a precursor to a war which would be declared the following month. £750 (US $1,077).

Baldassare Altieri was a significant Venetian in the 1530's and 1540's. He was secretary to the Count of Modena, later secretary to the English envoy Edmund Harvel. It afforded him protection, as Altieri pushed the borders of what was acceptable religiously. He was a Protestant during the Reformation, and the Italian states were not a place where the Reformation caught on. Neither was Altieri a closet Protestant. He promoted his beliefs, corresponded with Luther, and circulated banned literature. As Protestants were arrested or fled during the 1540's, Altieri persevered. His diplomatic status working for the Protestant British King Henry VIII served as protection. However, in 1548, envoy Harvel died, removing the major source of Altieri's security. He was on his own. The following year, Altieri secured this letter from the consuls and senators of Zurich, sent to the Council of Ten at Venice. The letter notes that Altieri had been living freely in Venice but was now in fear for his life as a result of the malevolence of some people acting under the pretext of religion. It evidently was not a success as he fled Venice later that year. Item 1. £950 (US $1,364).